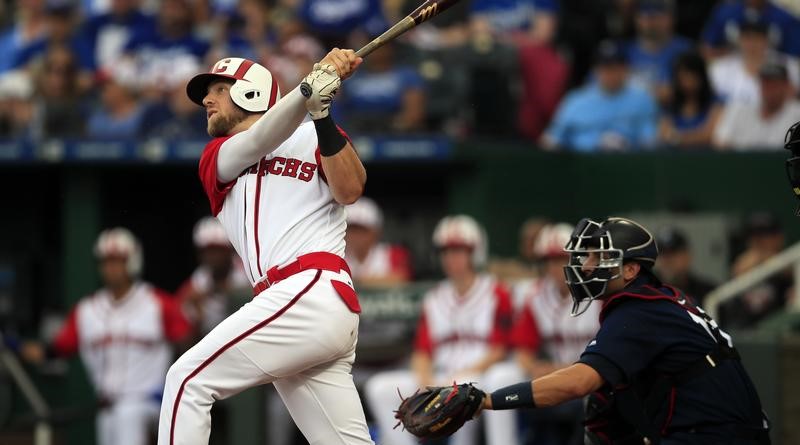 The game:  It was basically decided in the third inning.  With one out, singles by Hamilton and Merrifield put men on first and third.  Nicky Lopez' bunt single scored the first run, Gordon doubled home a second, and Dozier hit a three-run homer.  That quickly, the Royals were ahead 5-0 and they would stay ahead the rest of the game.

Rosario got the Twins on the board leading off the fourth.  Arraez had a one-out double and Miguel Sano walked, but Jason Castro was caught looking and Jake Cave grounded out, so the score stayed 5-1.  Facing some mediocre Kansas City pitchers, the Twins only got one other threat going.  That came in the seventh, when Cave was hit by a pitch, Polanco had a two-out infield single, and Nelson Cruz was hit by a pitch to load the bases.  Rosario hit into a force out, however, and the Twins would not threaten again.  Gordon's RBI double in the bottom of the seventh completed the scoring.

Notes:  Arraez was at second base in place of Jonathan Schoop.  Kepler remained in center, with Cave in right and Byron Buxton still on the IL.

Pineda had been pitching fairly well lately, by his standards.  He pitched well in this game if you take out the third inning, which unfortunately you can't.

The Twins had nine hits, a walk, and two hit batsmen, but could score just one run.  The hits were concentrated in a very few players.  As you can see above, Arraez had four of them.  The top two men in the Twins order, Kepler and Polanco, went 4-for-10.  The three through five batters were 1-for-12, with Rosario's solo homer being the lone hit.  The bottom three batters were 0-for-10.  That led to eleven men being left on base.

The Twins are 5-5 over their last ten games.  A year ago, we'd have looked at that as a hopeful sign, thinking that maybe the Twins were starting to build on something.  This year, we're all disappointed and wondering what the Twins will do to right the ship.  One thing I've noticed abut Rocco, though, is that he does not get into panic mode easily.  He has faith in his players and has faith in his own decision-making ability.  If he believes he has a good reason for doing something, he's not going to change his mind just because it doesn't work right away.  That's a good thing, I think, as long as you don't carry it too far.  It's possible for that attitude to become stubbornness, where you insist on doing things your way despite evidence that your way doesn't work.  I've not noticed that in Rocco, but he's only been a manager for half a season, so I guess time will tell.

The Twins signed Cody Allen to a minor league contract the other day.  He was a really good relief pitcher until a couple of years ago, when he suddenly wasn't any more.  It's a low-risk move that really can only hurt you if you allow it to.  What I mean is that it can hurt you if you allow him to take playing time from a more deserving player, or if you convince yourself that you don't need to do anything else, or if you bring him to the majors even though he hasn't proven he belongs there, just because of who he is.  I have confidence in the current front office that they won't let those things happen.  And who knows?  Maybe the Twins can help him get back to being a useful reliever again.  The Twins could certainly use one of those.

Record:  The Twins are 50-27, first in the American League Central, eight games ahead of Cleveland.