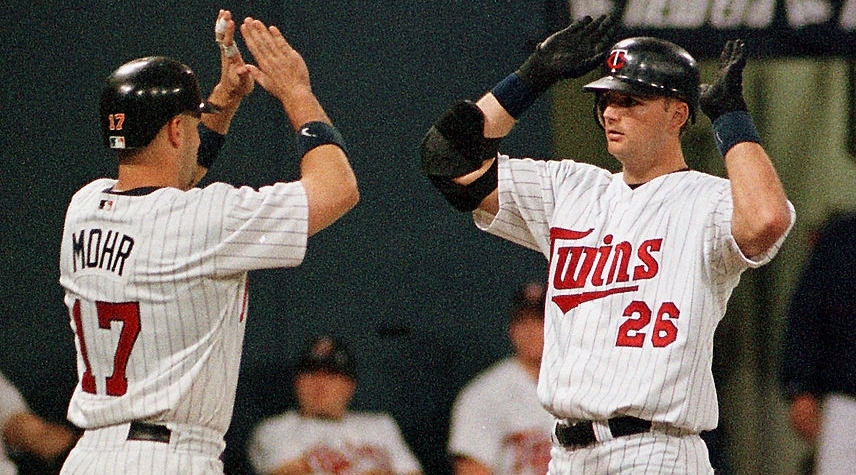 The game:  This one was over early, as the Twins scored seven runs in the first inning.  Ford led off with a single and scored on Guzman's triple.  Koskie walked and LeCroy had an RBI single.  Doug Mientkiewicz walked to load the bases and Mohr had an RBi single.  Pierzynski then hit a grand slam, making it 7-0 Twins.

The Twins got one in the sixth when Pierzynski singled, went to second on a balk, and scored on Ford's single.  They really put it away in the seventh, getting another seven-run inning.  Koskie led off with a single and LeCroy hit a two-run homer.  With one out Mientkiewicz and Mohr singled and Pierzynski hit a three-run homer.  Luis Rivas and Ford singled and Koskie hit a two-out two-run double, making the score 15-2.

Walker homered in the eighth to round out the scoring at 15-3.

Notes:  Mohr was in left in place of Jacque Jones.  Ford was in center in place of Torii Hunter.  Bobby Kielty was in right.

Denny Hocking pinch-hit for Mientkiewicz in the eighth inning and stayed in the game at first base.

Rogers threw 103 pitches over his eight inning.  Tony Fiore came in to pitch the ninth.  I strongly suspect that, when he entered the game, John Gordon solemnly stated, "This is not a save situation."

Two Rockies in the game had the same name as other, more famous players, even though they had solid careers in their own right.  Bobby Estalella was a reserve catcher for parts of nine seasons, but is not as fondly remembered as the outfielder immortalized by Dave Frishberg in the song "Van Lingle Mungo".  Javier Lopez, who gave up seven runs in this game, was in the first year of what turned out to be a fourteen-year career, but when we say Javier Lopez, most of us think of the Atlanta catcher.

Record:  The Twins were 37-27, in first place in the American League Central, five games ahead of Kansas City.

Batting stars:  Dan Gladden was 2-for-4 with a stolen base, his ninth.  Chuck Knoblauch was 1-for-2 with two walks.

Pitching star:  Terry Leach pitched 3.2 innings, giving up one run on one hit.

The game:  The Twins had men on first and second with none out in the first and did not score.  In the third, the Angels exploded for five runs.  With one out, Joyner doubled and Gary Gaetti singled him to third.  Dave Parker hit an RBI double, there was a run-scoring ground out, Abner had an RBI single, and Parrish hit a two-run homer,  making the score 5-0 California.

The Twins had men on first and second with two out in the third and did not score.  Abner homered in the fifth to make it 6-0.  In the sixth, Donnie Hill walked and Luis Polonia and Joyner hit back-to-back doubles to increase the lead to 8-0.  Sojo homered in the eighth to make it 9-0.

The Twins finally got on the board in the bottom of the eighth.  With two out, they got consecutive singles by Gladden, Knoblauch, and Shane Mack, avoiding the shutout with a score of 9-1.

Notes:  Gene Larkin was at first base with Kent Hrbek on the bench.  With Erickson pitching, Junior Ortiz was behind the plate in place of Brian Harper.  Al Newman was at shortstop in place of Greg Gagne.

With the changes, Mack was in the third spot in the batting order, with Puckett batting fourth and Chili Davis fifth.

Erickson pitched just three innings, allowing five runs on seven hits and a walk.  His ERA went to 2.89.  It was his second consecutive bad start and third out of four.  His injury was clearly affecting him, but the Twins kept sending him out there.

I'm pretty sure that, when Mike Fetters came in to pitch the ninth for the Angels, John Gordon solemnly stated, "This is not a save situation."

The White Sox lost to Detroit 6-4, so the Twins maintained their lead.

Record:  The Twins were 68-48, in first place in the American League West, 1.5 games ahead of Chicago.