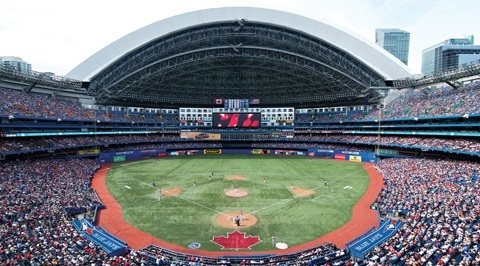 At the game marking the two-thirds point of the season, the Twins hope to stop regressing to the mean and start acting like the team that outplayed expectations throughout most of the first half. My ability to watch this team has been minimal since the All-Star Game thanks to scheduling luck and bad situations, and tonight will be no different, but here's hoping I don't come back to learn that the team has dipped to .500 for the first time in months.

Kyle Gibson, a solid but unpredictable starter, faces Mark Buehrle, whose year-by-year statistics are so predictable you can nearly set a watch to him. Outside of the better laundry he's essentially unchanged from when the Twins saw him on the regular, so that's who they face today.

Okay, Twins. Let's stick around the Wild Card race for a while.

Twins face Buehrle for the first time since 2011. It seems Buehrle is still Buehrle. A bit older, but equally capable of stymieing the Twins.

The Twins pieced together four shutout innings of relief to win their second straight game against the White Sox while pulling within a half game of first place in the AL Central.  Nick Blackburn allowed two runs in five innings despite pitching around ten baserunners (sound familiar?).  Craig Breslow, Boof Bonser (?!), and Jose Mijares each pitched a scoreless inning before Joe Nathan's 1-2-obligatory-4 ninth inning save, the 200th of his career.  “You couldn’t ask for anything better than that,” Blackburn said of the bullpen.  “They came in, did their job and got those guys out.  No drama.  It was great.”  In Mijares's eighth inning, he retired JI JIM, Paul Konerko, and Ken Griffey, Jr. in order. END_OF_DOCUMENT_TOKEN_TO_BE_REPLACED

That's going to be a lot of contacted balls today. Blackburn: keep them in the park. Buehrle: it's cool if you let a few exit the park in fair territory.

Morning baseball (morning here, anyway). Yesterday, the Twins did what they do, beating the White Sox at home. Well, recently, they've beaten them everywhere. How do we feel about today?

Buehrle, in his twelfth season with the White Sox, doesn't show signs of being a different pitcher at all. His numbers are totally stable this year in comparison to recent years, so the Buehrle you know is the one that's pitching today.

Blackburn's K/9 is all the way up to 4.99, which might help to explain why he's been so much more successful this year than last. His GB% is a tick up from last year, too, which was up from the year before, which was up from the year before. I never trusted the guy, but it seems like he might turn out to be a good pitcher by sheer force of will. For those playing at home, Aaron Gleeman once made a bet with someone that Blackburn would never get 75 Wins as a major leaguer (I agreed). As of today, his next one will put him over 50% of the way there. I still don't know if he gets there, but I'll say I'm definitely not rooting for him to start failing today.