Bubba Hyde was an outfielder in the Negro Leagues for twenty-six years.

Robert Nederlander is a part-owner of the New York Yankees and was managing partner in from 1990-1991, when George Steinbrenner was suspended.

END_OF_DOCUMENT_TOKEN_TO_BE_REPLACED 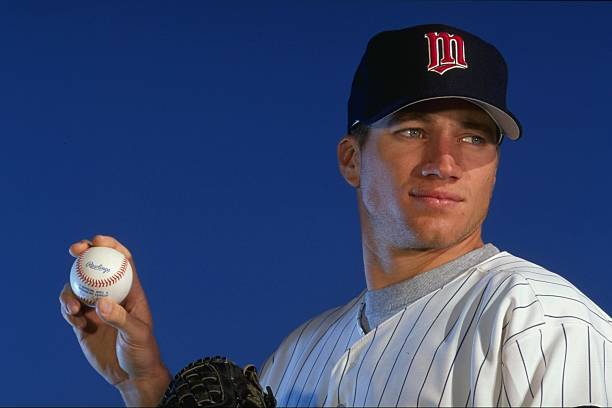 Opposition stars:  Pat Rapp pitched six innings, giving up one run on six hits and two walks and striking out one.  Brian Daubach was 2-for-3 with a double.  Darren Lewis was 2-for-4.  Nomar Garciaparra was 2-for-5 with two RBIs.  Trot Nixon was 1-for-1 with a home run (his second), three walks, and four runs.

The game:  Lewis led off the third with a single and Nixon walked.  A wild pitch moved the runners up and a pair of productive outs gave the Red Sox a 2-0 lead.  Daubach led off the fourth with a double and went to third on a wild pitch.  He was retired trying to score on a grounder to first, however, and when the next batter was retired it looked like the Twins might get out of the inning.  But Nixon walked and Jose Offerman hit a two-run triple to put Boston up 4-0.

The Twins got on the board in the sixth on singles by Torii Hunter, Coomer, and Koskie.  The Red Sox put the game out of reach in the seventh.  Nixon walked, John Valentin singled, and Reggie Jefferson walked to fill the bases.  Garciaparra had a two-run single and, following a walk to Mike Stanley, Jason Varitek hit a two-run single, giving Boston an 8-1 lead.  Nixon homered leading off the eighth to make it 9-1.

Notes:  This was Coomer's all-star season.  One of the many odd things about that is that if you look at the 1999 Twins on b-r.com, he is not listed as a regular.  He played 71 games at first, 57 games at third, and 7 games as the DH.  Doug Mientkiewicz is listed as the regular first baseman and Koskie is the regular third baseman.

In this game, however, Coomer was at first and Brent Gates at third, with Koskie as the DH.  Marty Cordova was the regular DH, as injuries limited him to 29 games in the outfield.  Javier Valentin was the catcher, with Terry Steinbach given the day off.

Despite his batting average, Koskie would play just 117 games and had just 392 plate appearances.  Twenty-five of his games were in right field, with just seventy-nine at third base.  Part of the reason for that is that Tom Kelly absolutely loved Brent Gates.  We talk about how Ron Gardenhire loved futility infielders, but Kelly had his flings with them, too.  In two seasons with the Twins, Gates played in 217 games and had 723 plate appearances, with a batting line of .252/.326/.330.  Yes, the Twins weren't very good then, but players like Koskie, Mientkiewicz, and David Ortiz either sat the bench or were left in AAA while Kelly wasted all those at-bats on Gates.

Starter Mike Lincoln pitched four innings, allowing four runs on six hits and three walks and striking out none.  Lincoln would not have a very good career, but he did have a couple of good years pitching out of the Pittsburgh bullpen.  Apparently on the strength of that, he pitched in the majors for parts of nine seasons, putting up a line of 17-30, 5.33, 1.51 WHIP.  His last three seasons were with Cincinnati, who put him into 102 major league games while he was going 4-6, 5.73, 1.53 WHIP.  Yet another player who got chance after chance long after he'd established that he was not a good major league pitcher.

Bubba Hyde was an outfielder in the Negro Leagues for twenty-six years.

Robert Nederlander is a part-owner of the New York Yankees and was managing partner in from 1990-1991, when George Steinbrenner was suspended.