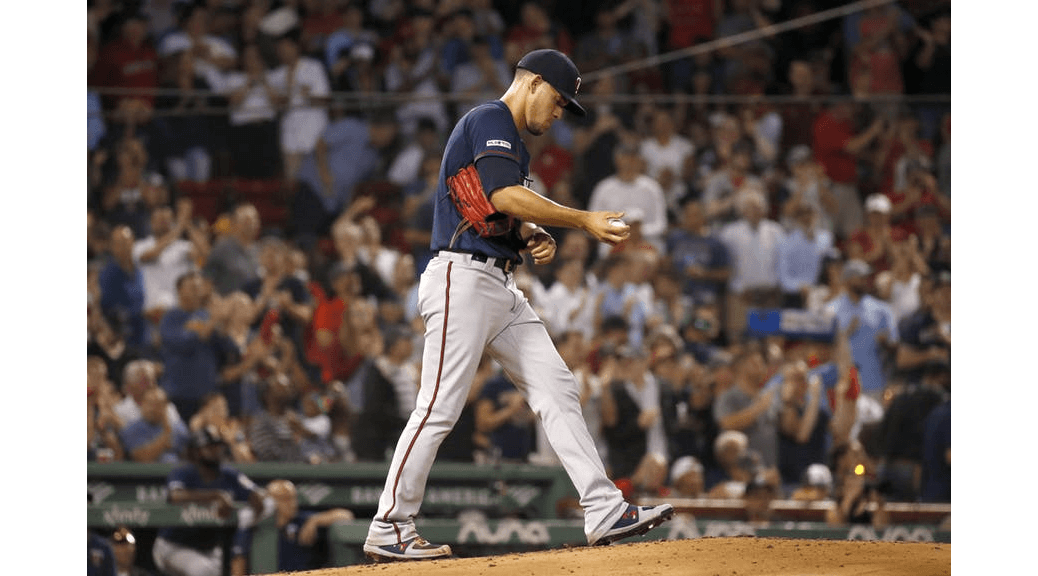 Opposition stars:  Eduardo Rodriguez struck out eight in seven shutout innings, giving up five hits and four walks.  Mookie Betts was 4-for-5 with two home runs (his twenty-fourth and twenty-fifth) and five RBIs.  Christian Vasquez was 2-for-4 with a double.  Brock Holt was 2-for-4.

The game:  Betts led off the bottom of the first with a home run, giving the Red Sox a 1-0 lead.  The Twins put men on first and third with two out in the second but could not score.  With one out in the bottom of the second, Vazquez singled, Jackie Bradley walked, and Betts homered again, putting Boston up 4-0.

The game was basically over at that point, because the Twins could not score against Rodriguez.  They threatened in the fourth, opening the inning with two singles, but a double play ended the threat.  The Red Sox added two more in the sixth, as Holt led off with a single, Mitch Moreland walked, Vasquez doubled, and Betts delivered a one-out single.

The Twins got on the board in the eighth, as Nelson Cruz singled and Rosario hit a two-run homer.  All that did was avoid a shutout, though.  They got a pair of one-out walks in the ninth, but a double play ended the game.

Notes:  Max Kepler remains in center with Byron Buxton on the bench.  Jake Cave was in right field.  Kepler left the game with an injured chest, according to the play-by-play.  I don't know anything about what happened or how serious it is.  Willians Astudillo was behind the plate.

Luis Arraez entered the game as a defensive replacement and walked in his only time to the plate, so his batting average remains .343.  Cruz was 1-for-5 and is batting .308.  Jorge Polanco was 0-for-4 and is batting .302.  Graterol has an ERA of zero in two games.

You never like to lose, of course, but the loss in itself is not a big deal.  The Twins have won nine of eleven--you're not going to win them all.  Rodriguez is a good pitcher--the Twins aren't the first team he's shut down and they won't be the last.  It happens.

The concern, though, is the continuing question of "What's Wrong With Jose Berrios?"  Rocco tried to pass it off as just getting beat by one great player, Betts, which I might be able to buy if this was just a random bad game.  It's clearly not.  His average game score for the six starts prior to this one was thirty-six, and while I don't have access to last night's game score I don't think it helped that average much.  He hasn't had a good game since July 31, when he dominated a bad Miami team.

My guess--and I emphasize that's all it is--is that he's hiding an injury, and that it's working about as well as it usually does.  Again, I have no solid evidence to support that.  It just seems like the majority of the time, when a good player suddenly isn't, there's a physical reason why.  If so, then ten out of ten for being a tough guy and a gamer, but minus several hundred for good sense.  The way he's pitching now the Twins have to score about ten runs to win, and not even the Twins can do that consistently.

The Twins basically have about three and a half weeks to figure this out.  They can win the division without a healthy and effective Berrios, but they can't win in the playoffs without him.  As it stands right now, the Twins basically have two reliable starters--Jake Odorizzi and Michael Pineda.  I know they won in 1987 with two reliable starters, but it wasn't easy then, and with the extra levels of playoffs it's pretty much impossible now.  The only way you can do it is if you have such an awesome and resilient bullpen that you can consistently go to it in the third or fourth inning and win, and while the Twins bullpen has been better it's not in that category.  The only way the Twins have a chance in the post-season is if Jose Berrios pitches like he did in the first four months of the season.  The Twins have the rest of this month to figure out how to make that happen.

Record:  The Twins are 86-53, in first place in the American League Central, 5.5 games ahead of Cleveland.