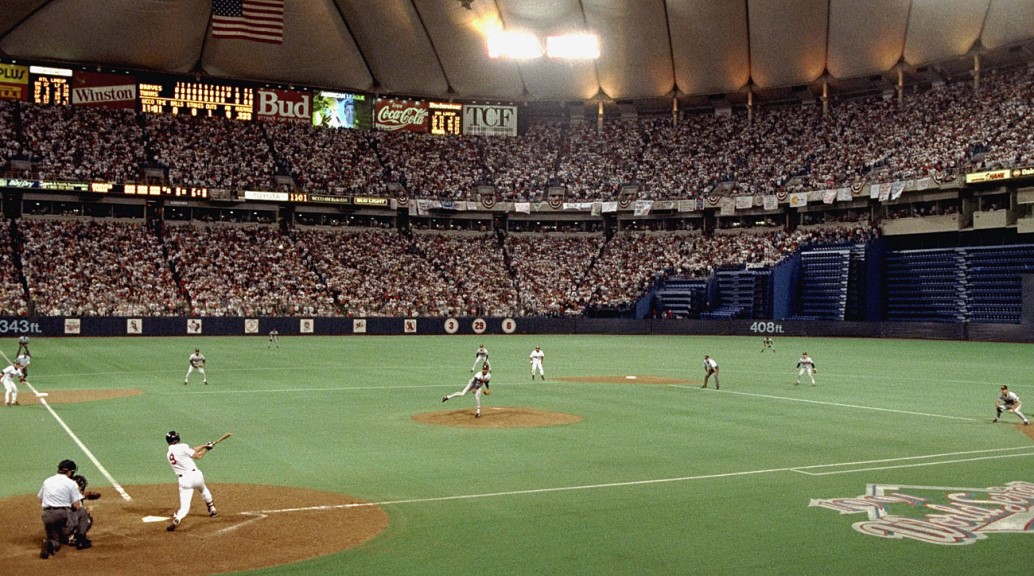 Batting stars:  Chili Davis was 1-for-4 with a home run, his twenty-eighth.  Kent Hrbek was 1-for-3 with a walk.

Pitching star:  Jack Morris pitched an eight-inning complete game, giving up four runs on five hits and two walks and striking out six.  He threw 113 pitches.  He clearly did not do a good job of pitching to the score.

Opposition stars:  Nolan Ryan struck out nine in seven innings, giving up one run on two hits and a walk.  Kevin Reimer was 1-for-2 with a three-run homer (his seventeenth) and a walk.

The game:  The Rangers got all the runs they needed in the first inning.  They opened the inning with singles by Brian Downing and Julio Franco, and a sacrifice fly scored the first run.  Ruben Sierra singled and Reimer hit a three-run homer to make the score 4-0 Texas.

That was all the Rangers got, but again it was all they needed.  The Twins got on the board in the fourth when Dan Gladden and Chuck Knoblauch singled and Kirby Puckett hit an RBI ground out, but that was it for the inning.  Those were the only hits the Twins got against Ryan.  They scored two in the ninth when Hrbek hit a two-out single and Davis hit a two-run homer, cutting the margin to 4-3.  That was it, though as pinch-hitter Randy Bush grounded out to end the game.

Notes:  Gene Larkin pinch-hit for Greg Gagne in the eighth, with Scott Leius then coming in to play shortstop.  Bush pinch-hit for Brian Harper in the ninth.

Russell gave up two runs in one inning, taking the score from 4-1 to 4-3, and was credited with the save.

The White Sox lost to California 7-4, so another day came off the schedule without them gaining any ground.

Record:  The Twins were 85-56, in first place in the American League West, 8.5 games ahead of Chicago.

In the East, Boston won and Toronto did not play, so the Blue Jays' margin fell to 3.5 games.

Pitching star:  Jack Morris pitched 7.2 innings, giving up two runs on eleven hits and one walk and striking out two.

Opposition stars:  Greg Swindell pitched 8.2 innings, giving up one run on five hits and no walks and striking out six.  Albert Belle was 2-for-4 with a double.  Carlos Martinez was 2-for-4 with two RBIs.  Glenallen Hill was 2-for-4.

The game:  The Indians put men on first and second in the first inning but did not score.  The Twins got the scoring started in the third.  With one out, Leius singled, Greg Gagne doubled, and a sacrifice fly put Minnesota up 1-0.  Cleveland tied it in the fourth.  Mark Whiten and Mike Aldrete opened the inning with singles, putting men on first and third.  Martinez then hit into a force out to tie the score at 1-1.

The Indians put men on first and third with one out in the seventh but did not score.  In the eighth, however, Belle hit a one-out double and Whiten walked.  With two out, Martinez delivered an RBI single to give Cleveland a 2-1 lead.

The Twins threatened in the ninth.  With two out, Chili Davis and Kent Hrbek singled, putting men on first and second.  Randy Bush then grounded out to end the game.

The Indians stranded nine men and were 1-for-11 with men in scoring position.

Olin had started the season with Cleveland, but got off to a poor start and was sent back to AAA in mid-May.  He came back to the majors in mid-July and almost immediately took over the closer role.  He was the Indians closer for all of the 1992 season and had a fine year.  He probably would've remained in that role for some time to come, but as many of you know, he was killed that off-season in a boating accident.

Morris threw 122 pitches.  He pitched well, but unfortunately was not able to sufficiently pitch to the score.

Record:  The Twins were 76-52, in first place in the American League West, eight games ahead of Chicago and Oakland. 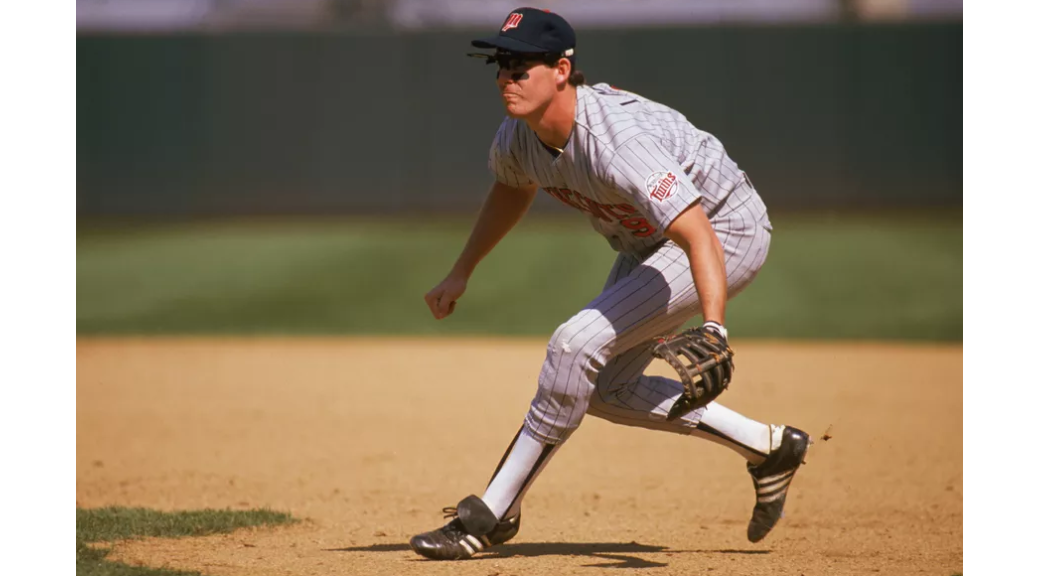 The game:  In the first inning, Knoblauch hit a one-out single and Davis hit a two-out two-run homer to put the Twins up 2-0.  In the third, Gladden and Knoblauch singled and Kirby Puckett drew a walk to load the bases with one out.  Brian Harper hit a sacrifice fly and Larkin singled home a run to make it 4-0.

The Blue Jays came storming back in the fifth.  Gruber led off with a home run and Olerud hit a one-out homer to cut the lead to 4-2.  Myers singled and Manny Lee hit a single-plus-error, scoring Myers and making it 4-3.  Mookie Wilson then hit a sacrifice fly to tie it 4-4.  Toronto wasn't done, as White singled and stole second and then scored on a Roberto Alomar single to put the Blue Jays up 5-4.

It stayed 5-4 until the sixth, when Larkin singled and Pagliarulo hit a two-run homer to put the Twins back in front 6-5.  They got a couple of insurance runs in the seventh.  Puckett was hit by a pitch and Davis walked.  A bunt moved the runners up, Mack's sacrifice fly scored one, and an Al Newman single made the score 8-5.

Myers homered in the eighth to make it 8-6, but that was the only hit Toronto had after the sixth inning.

Notes:  Larkin remained at first base, as Kent Hrbek was still out of the lineup.  Newman pinch-hit for Pagliarulo in the seventh and stayed in the game at third base.

Morris pitched seven innings, allowing five runs on nine hits and two walks and striking out four.  He pitched really well other than in the fourth inning.  Again, I would suggest that any other pitcher would've come out of the game in that fourth inning--Morris allowed five runs on six hits, including two home runs, in that inning.  For whatever reason, Tom Kelly stuck with Morris.  I guess you can say it worked, as Morris pitched well after that inning and the Twins came back and won.  It could be suggested, however, that it would've been better to not have lost the lead in the first place, and that using a relief pitcher might have accomplished that.

Record:  The Twins were 44-27, in first place in the American League West, 4.5 games ahead of both California and Oakland.