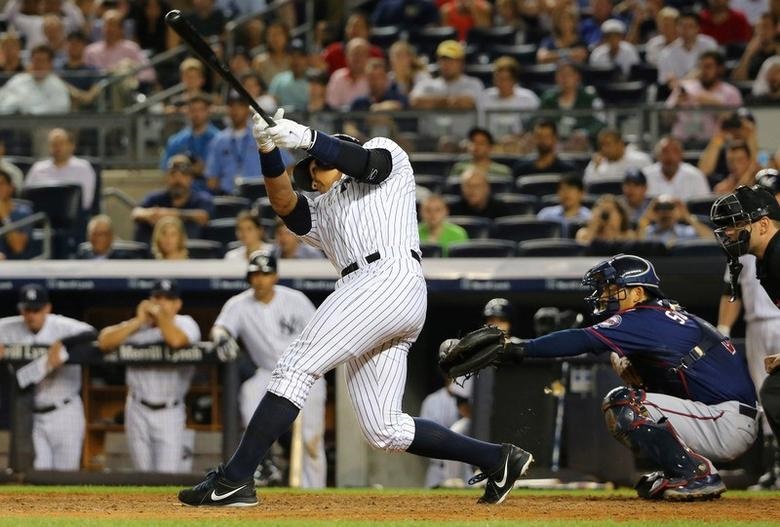 Pitching stars:  Casey Fien struck out two in two shutout innings, giving up a walk.  Kevin Jepsen pitched a perfect inning and struck out one.

Opposition stars:  Brian McCann was 3-for-5 with a home run (his twenty-first), a double, and five RBIs.  Jacoby Ellsbury was 3-for-5.  Carlos Beltran was 1-for-4 with a two-run homer, his thirteenth.

The game:  The Yankees jumped on Kyle Gibson for three runs in the first inning.  Ellsbury led off with a single, Alex Rodriguez drew a one-out walk, and McCann hit a three-run homer to give New York a 3-0 lead.

To their credit, the Twins battled back.  With two out in the second, consecutive singles by Rosario, Kurt Suzuki, and Eduardo Nunez got them on the board.  In the third, Dozier led off with a single and Sano hit a one-out two-run homer to tie the game.  Plouffe then singled, went to third on an error, and scored on a Rosario single to put the Twins ahead 4-3.

The lead didn't last long.  In the fourth, Ellsbury led off with a single and Brett Gardner walked.  Rodriguez reached on an error, but Ellsbury was thrown out trying to score, leaving men on first and third.  Rodriguez stole second with two out and McCann delivered a two-run single to put New York back in front 5-4.

Again, the Twins battled back.  Hicks led off the fourth with a home run and Plouffe led off the fifth with a home run, giving the Twins a 6-5 lead.  In the sixth, consecutive two-out singles by Joe Mauer, Sano, and Plouffe made it 7-5 Twins.  In the bottom of the sixth, however, Mark Teixeira walked and Beltran hit a two-run homer to tie the score 7-7.

The Yankees loaded the bases in the bottom of the seventh but did not score.  There were no other threats in regulation, so we went to an extra inning.  Greg Bird and McCann led off with back-to-back doubles, but Bird only got to third base on McCann's double, so the game continued.  Beltran was intentionally walked, but Chase Headley hit a weak ground ball to short that scored the deciding run.

Notes:  The leader in batting average in the starting lineup was Miguel Sano at .292.

In addition to those listed above, Twins relivers used were Brian Duensing and Ryan O'Rourke.

Nunez was at shortstop in this game.  Eduardo Escobar is listed as the starting shortstop in 2015, but he played just seventy-one games there.  Next highest was Danny Santana at sixty-six.  Escobar did come into the game in the tenth after the bases were loaded.  He replaced Torii Hunter and is listed in right field, but I suspect Paul Molitor went with a five-man infield.

Twins starter Kyle Gibson pitched five innings, allowing six runs on four hits and three walks and striking out two.  Yankees starter Bryan Mitchell pitched 1.2 innings, giving up one run on four hits and no walks and striking out two.  Mitchell came out after Nunez hit a line drive back to the pitcher, which I assume is why he was removed.  He would not pitch again until August 28.

When I saw the game random.org had given me, I thought seriously about telling it to try again.  I decided against it, but if it gives me very many more like this we may have to change the rules.