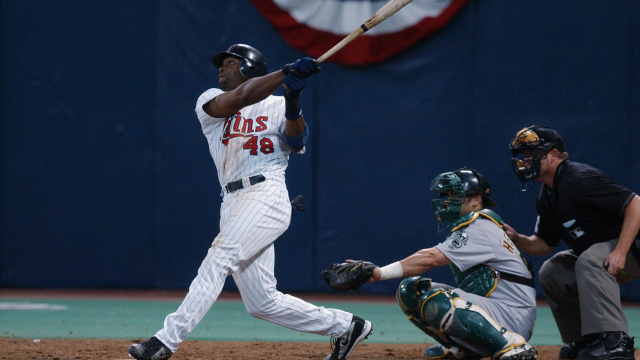 Batting stars:  Torii Hunter was 2-for-3 with a grand slam (his third homer), a walk, and five RBIs.  Ron Coomer was 2-for-4 with a double and two runs.  Terry Steinbach was 1-for-2 with two walks.

The game:  With Radke pitching, the Red Sox naturally scored in the first inning.  Jose Offerman led off the game with a single and John Valentin followed with an RBI double, putting Boston ahead 1-0 two batters into the game.  That was all they could do, though, and it stayed 1-0 until the fourth.

Matt Lawton led off the fourth inning with a walk and Coomer singled.  A wild pitch moved men to second and third with none out, but the next two batters fanned.  Chad Allen walked to load the bases and Hunter unloaded them with a grand slam, giving the Twins a 4-1 lead.

The Red Sox loaded the bases with one out in the sixth, but Jason Varitek was retired on a short fly to right and Trot Nixon struck out to end the threat.  The Twins extended their lead in the bottom of the sixth.  Coomer led off the inning with a double and went to third on a passed ball.  Steinbach walked, and with two out Hunter and Denny Hocking had RBI singles to put the Twins up 6-1.

Boston again loaded the bases in the seventh, this time with two out, but Troy O'Leary grounded out.  They added a run with two out in the ninth when Jefferson homered, but that was all they could do.

Notes:  Hocking was at shortstop in place of Cristian Guzman.  One assumes Tom Kelly thought that, with Wakefield pitching, it would be a good time to give the rookie a day off.

Coomer was at third base.  Corey Koskie would eventually become the regular third baseman in 1999, but early in the season Coomer saw a lot of time there, with Koskie either on the bench, at DH, or in right field.

The Twins did not make any substitutions in their lineup in this game.

Coomer would lead the team in home runs with 16.  Others in double figures were Cordova (14), Koskie (11), and Allen (10).  The Twins pretty much missed out on the home-run happy late 90s.  They were dead last in the league at 105 home runs, forty behind the next lowest team (Tampa Bay).

Rick Aguilera was still the closer at this point, but rather than use him in a non-save situation Kelly opted to give Trombley the three-inning save.  Aguilera would be traded on May 21 and Trombley would become the closer for the only time in his career.  He did very well in the role, but he did not have classic closer stuff, so he never got another chance to do it.

The Red Sox stranded 12 runners and went 1-for-9 with men in scoring position.  They had to feel like this was one they let get away.

Random Record:  The Twins are 31-27 in Random Rewind games.