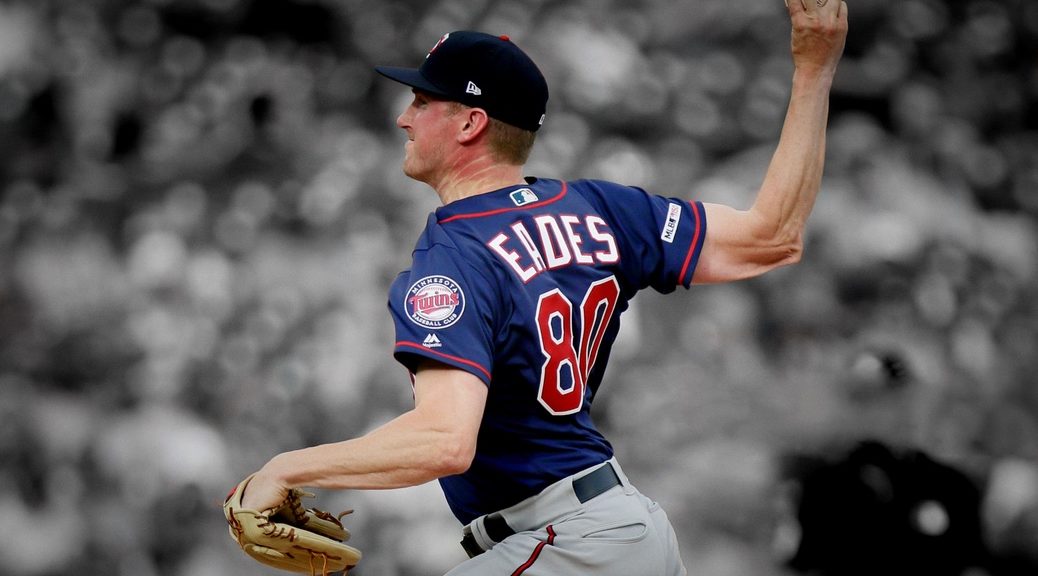 Note: Any time the a number has only been issued to a coach, that number will be skipped and collected in a special post of coach numbers near the end of the series.

Ryan Eades pitched 3.2 innings across two games for the Twins in 2019 after a mid-season call-up from AAA Rochester. Eades replaced Willians Astudillo on the active roster on 08 June and wasted no time getting into a game. Of the sixteen batters he faced, Eades struck out five, walked two, and surrendered four hits, none of which were home runs. He allowed two stolen bases.

The first was by Niko Goodrum with two down in the bottom of the Detroit 6th on 08 June; the Tigers were up 5-2, but likely felt they needed every run they could get. Rocco Baldelli challenged the call, but it was upheld. Eades walked the batter, but recovered and struck out Nick Castellanos to end the inning. The Twins lost the game.

The second stolen base came in the top of the 8th against the Mariners on 12 June. Eades was the third pitcher of the inning for the Twins. The score was tied 1-1 when Trevor May began the inning in relief of Mike Morin. May gave up a walk and a single, then Domingo Santana hit a sac fly to score the lead runner, Edwin Encarnacion. Blake Parker was called in with one runner on and one out. Parker gave up a single to Omar Narvaez that did not score Dan Vogelbach. Dee Gordon reached on an error by first baseman C.J. Cron, scoring Vogelbach. Then, Blake Parker coughed up a three-run homer to Shed Long. Parker was yanked for Eades, who struck out Dylan Moore for the second out. Mallex Smith hit a single, then stole second. He gained third on Mitch Garver's throw, but Eades struck Kyle Seager out to escape the inning. The Twins tied it up over the next two innings while Eades held the Mariners in check. Tyler Duffey replaced Eades in the 10th, the Twins’ defense gave up three runs on three errors, and they lost 9-6.

Eades was sent back to Rochester for his trouble; Fernando Romero came up to take his roster spot. The Orioles claimed Eades off waivers on 14 August; he pitched 11.1 innings for Baltimore down the stretch. Eades was outrighted by the Orioles in October and is currently a free agent. 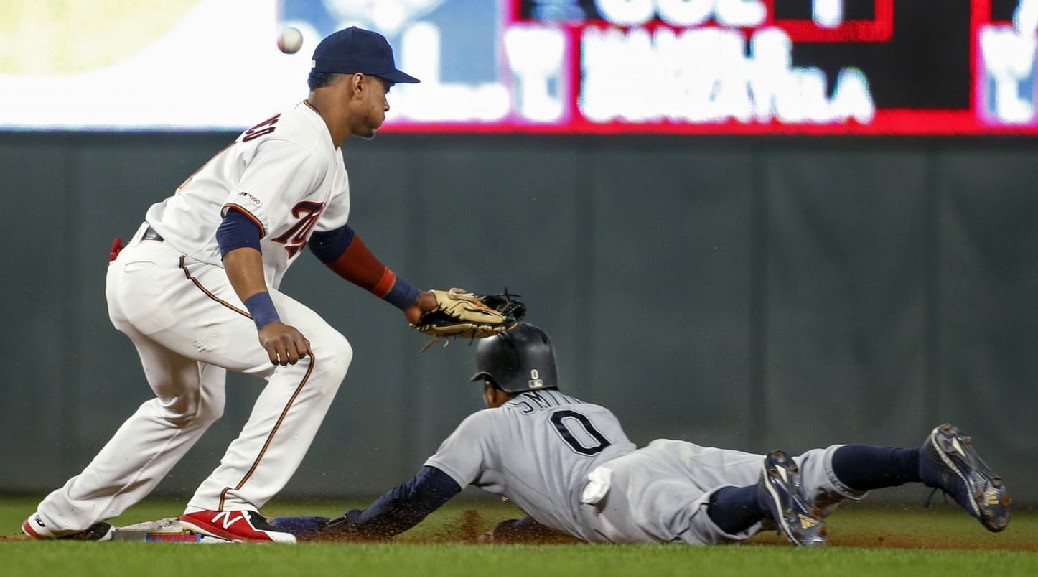 Opposition stars:  Daniel Vogelbach was 4-for-5 with a home run, his seventeenth.  Mallex Smith was 3-for-6 with two doubles.  Omar Narvaez was 2-for-4 with a double.  Dee Gordon was 2-for-5 with two doubles and two runs.  Shed Long was 1-for-4 with a three-run homer and a walk, scoring twice.  Tommy Milone struck out six in six innings, giving up three runs on four hits and no walks.

The game:  It was a pitchers' duel for seven innings.  The Mariners had runners all over the place for seven innings, but only scored when Vogelbach hit a leadoff home run in the sixth.  The Twins tied it 1-1 when Gonzalez homered with one out in the eighth.

The Mariners appeared to take control of the game with a five-run eighth.  A walk, a single, and a sacrifice fly scored the first run. A single, an error, and a three-run homer by Long scored four more.  It was 6-1, and it looked like the Twins were done.

Twins batters had other ideas.  Kepler homered with one out, and the Twins then put together four singles, with RBIs going to Garver and Gonzalez, to cut the lead to 6-4.  They struck again in the ninth, as Sano led off with a single and Buxton hit a two-run homer to tie it 6-6.

But as quickly as the Twins got back into the game, they got back out of it in the tenth.  A ground-rule double, a walk, and a bunt put men on second and third with one down.  The Twins then made three errors, leading to three runs, and the game was gone.

It would seem that there is plenty of blame to go around for this one.  The batters made a nice comeback, but for seven innings they did nothing against a couple of undistinguished pitchers.  The bullpen melted down in the eighth, but Eades came in to right the ship and the tenth inning can't be entirely blamed on Duffey.  The defense, normally reliable, let the team down in both the eighth and the tenth.  They say that you win as a team and you lose as a team, and the Twins lost as a team last night.

The exceptions are Eades, as mentioned above, and Berrios.  Berrios allowed nine baserunners, but only one scored.  It was mentioned that on the radio that he is stranding runners at a 78% rate, and that went up last night.  I wonder if he's trying to pace himself, only going max effort when there are men on base.  I'm not sure that allowing this many baserunners is sustainable for a season, but it's working for him so far.

I suspect one reason the Twins struggled against Milone is simply that you don't see pitchers like that much any more.  With all the emphasis on power arms, a soft tosser who can hit his spots and mix his pitches can be pretty effective, just because you rarely face pitchers like that.  Ryne Harper probably benefits from that, too.  I understand the preference for hard throwers, and as a general rule I agree with it.  Sometimes, though, we need to remember that the point is to get batters out, and any way you can do that is a good way.

Anyway, turn the page, put it in the rearview mirror, etc.  Cleveland lost yesterday, too, and we're still tied for the best record in the league.  As I heard someplace, you can't win them all.

Record:  The Twins are 44-22, first in the American League Central, 10.5 games ahead of Cleveland.