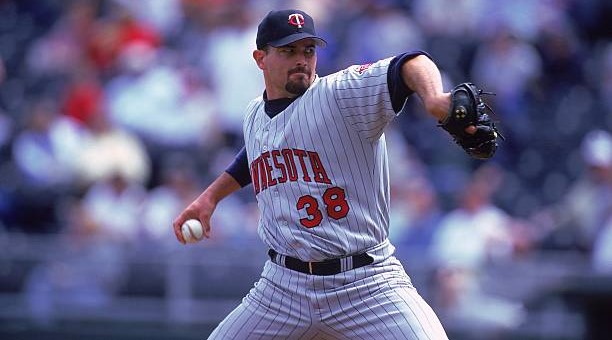 Batting stars:  Ron Coomer was 3-for-4 with a home run (his seventh) and two RBIs.  Jacque Jones was 2-for-5 with a double.

The game:  The Twins put two on with two out in the first, but nothing came of it.  Twins starter Sean Bergman retired the first two Mariners, but then Rodriguez singled, John Olerud walked, Martinez hit a two-run double, and Buhner hit a two-run homer, putting Seattle up 4-0 after one inning.

The Twins got on the board in the third, but missed a chance for a big inning.  Cristian Guzman walked and Jay Canizaro doubled, putting men on second and third with none out.  Matt Lawton hit a sacrifice fly, but that was all the Twins could do, and it was 4-1.  The Mariners immediately got the run back in the bottom of the third when Bell singled, Olerud walked, and Martinez had an RBI single.

Seattle put it away in the fourth.  Raul Ibanez walked and for some reason was bunted to second.  Mike Cameron singled, putting men on the corners, and Mark McLemore walked to load the bases.  Bell then hit a two-run double and Rodriguez a two-run single.  It was 9-1 Mariners.

The Twins did get a few runs to make the final score look better.  In the seventh Butch Huskey and Jones led off with back-to-back doubles.  Denny Hocking singled to bring home another run.  Coomer homered in the eighth to make it 9-4 and his RBI single in the ninth brought us to the final total of 9-5.

Notes:  The Twins had soured on Todd Walker at this point, so Canizaro was the regular second baseman.  They really didn't have a regular catcher.  Matthew LeCroy and Jensen each caught 49 games, Chad Moeller 48, a young A. J. Pierzynski 32, and Danny Ardoin 15.  Huskey started the season as the DH, but didn't hit much and was eventually replaced by David Ortiz.

Bergman allowed nine runs on eight hits and five walks in 3.1 innings.  This was his last year in the majors.  He's another guy who stayed around a long time without doing much.  He really only had one good year, 1998, when he was 12-9, 3.72, 1.31 WHIP with Houston.  He was adequate in San Diego in 1996, going 6-8, 4.37, 1.34 WHIP.  In his six other major league seasons, his lowest ERA was 5.12 and his lowest WHIP was 1.56.  Yet, he pitched 750.1 innings, made 117 starts, and appeared in 196 games.  After this game he was allowed to make five more starts, four of which were awful, and one awful relief appearance before the Twins finally released him.  He was picked up by Florida, Tampa Bay, Colorado, Florida again, and Baltimore before his playing career ended in 2004.  He also spent a couple of seasons in Japan, where he wasn't particularly impressive, either.  I assume he's a pretty nice guy.

It seems like random.org is giving us a lot of games against the Mariners.

The Mariners were 20-17, in first place in the American League West, a half game ahead of Oakland.  They would finish 91-71, in second place, a half-game behind Oakland, but would win the wild card by a game over Cleveland.

Bob Casey was the Twins' public address announcer from 1961 until his death in March of 2005.