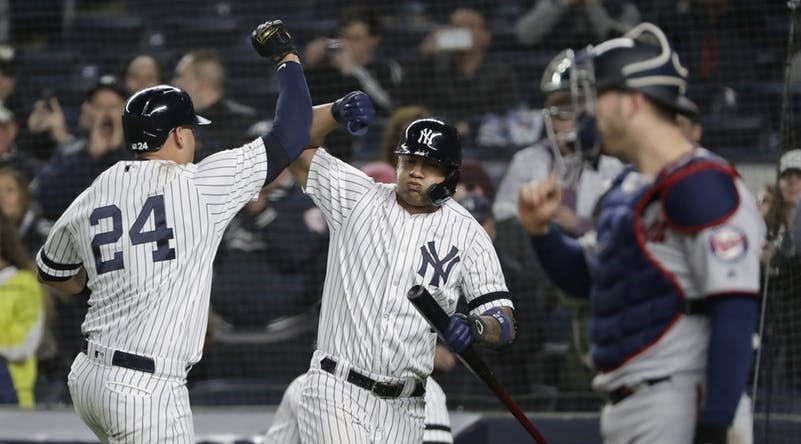 Batting stars:  Marwin Gonzalez was 2-for-4.  Nelson Cruz was 1-for-3 with a two-run homer, his sixth, and a walk.

Pitching star:  Fernando Romero pitched a perfect inning and struck out one.

Opposition stars:  Gary Sanchez was 3-for-4 with two home runs, his ninth and tenth.  James Paxton pitched three innings, giving up an unearned run on two hits and three walks and striking out one.  Jonathan Holder struck out two in two perfect innings.

The game:  An error and a walk put men on first and third with none out in the first for the Yankees, and Gleyber Torres hit a one-out single to put New York up 1-0.  The Twins got two singles and a walk in the second to load the bases with one out, but Ehire Adrianza hit into a double play to end the inning.  In the bottom of the inning a walk, a hit batsman, and a Luke Voit RBI single made it 2-0.  Two walks and an error loaded the bases for the Twins again with one out again in the third and C. J. Cron's sacrifice fly brought home one, but that was all the Twins could do, leaving the score 2-1 Yankees.

That was as good as it got for them.  In the fourth New York played small ball--an error and a Cameron Maybin single put men on first and second with none out, a bunt advanced them to second and third, a wild pitch scored one, and a ground out scored another, making the score 4-1.  Sanchez homered leading off the fifth to make it 5-1 and he homered again with two out in the seventh to make it 6-1.

To the Twins credit, they didn't give up.  With two out in the eighth Jorge Polanco walked and Cruz hit a two-run homer to make it 6-3.  Gonzalez got as far as third base with one out in the ninth, but he was still there when the game ended.

Notes:  Eddie Rosario was out of the lineup, with Gonzalez playing left field and Adrianza at third base.

I question the decision to sit Rosario down in this game.  I understand the reasoning--you're facing a tough lefty and he's been slumping.  But he hit a couple of balls hard in the last game, even though they went for outs.  I think sitting him down just gives him reasons to question himself and to think Rocco is losing confidence in him.  I'm not saying it was an obviously stupid move or anything.  I just wouldn't have done it.

The game log seems to be divided between criticism of Gibson, criticism of the defense, and criticism of the plate umpire.  I was not around for the game, so it's hard for me to say.  Gibson gave up five runs on seven hits and two walks and threw 100 pitches in just five innings, which doesn't sound good.  On the other had, three of the runs were unearned, and when you make your pitcher get four outs per inning he's going to have to throw more pitches and is probably going to allow more runs.  And Gibson is not a pitcher who can throw the ball over the center of the plate and get away with it, so if he's not getting the corners he's going to be in trouble.  Perhaps there was plenty of blame to go around, I don't know.

I think there were some positives that came out of this game, though.  The Twins never gave up any big innings, despite the errors.  In other words, they didn't collapse just because things went against them.  They had chances to score early on.  They got a couple of late runs to kind of get back into the game.  They were able to get three innings out of the tail end of the bullpen (and in fact both Mike Morin and Romero pitched pretty well), leaving the front end rested and ready for today.  This just has the feel of an ordinary baseball loss, and nothing more.

I realize that's not going to be the popular take.  The popular take is going to be "Here we go again.  Same old Twins.  The Yankees are in their heads.  They're intimidated.  The Yankees own them."  Blah, blah, blah.  And of course, people are going to keep saying that, and writing it, until the Twins do something about it.  Maybe today is the day they start doing something about it.  If they're going to win a game in this series, today looks like their best chance.

Record:  The Twins are 19-11, first in the American League Central, two games ahead of Clevelnd.