I expect the Twins will probably win this one. Gibson gonna Gibson.

Someone should tell these guys that this is basically the epitome of the soft part of the schedule, though. 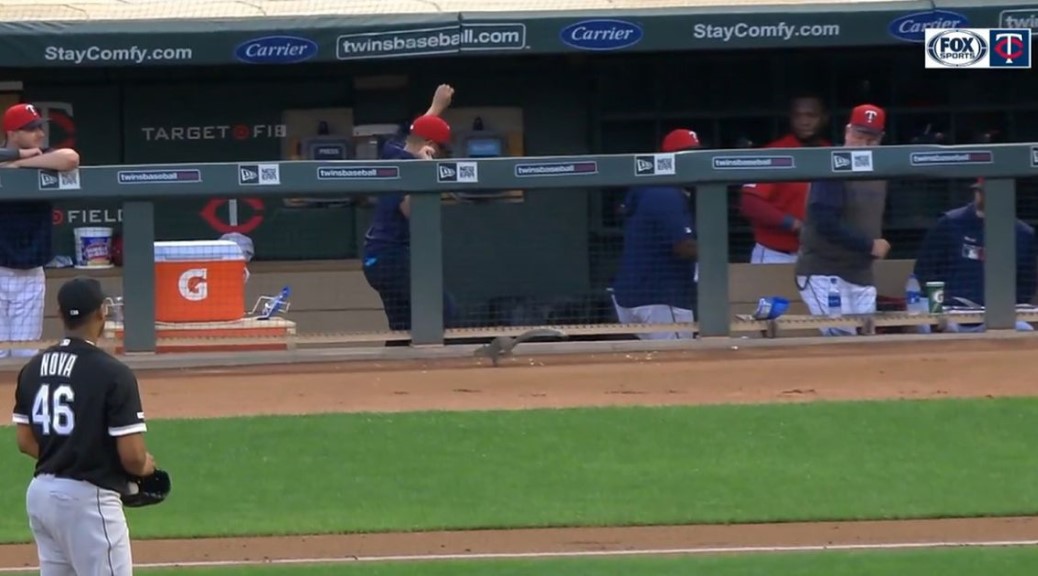 Opposition stars:  Ryan Goins was 3-for-4 with two runs.  Jose Abreu was 1-for-4 with a three-run homer, his twenty-seventh.  Ivan Nova pitched 5.1 innings, giving up two runs on ten hits and one walk and striking out two.

The game:  The Twins once again scored early.  Arraez and Polanco started the first inning with back-to-back doubles and Cruz followed with a single, putting the Twins up 2-0.  They missed a chance to add to the lead in the second, putting two on with two out but failing to score.  It cost them, because in the third singles by Matt Skole, Yolmer Sanchez, and Goins and a three-run homer by Abreu put the White Sox ahead 4-2.

The Twins put two on with two out in the fourth and did not score.  They had men on second and third with one out in the sixth, but the contact play cost the Twins again, as Sano was thrown out at the plate on a grounder to third.

In the seventh, Tim Anderson doubled, went to third on a ground out, and scored on a squeeze bunt to make the score 5-2.  Polanco hit a home run in the  bottom of the seventh to cut the margin to 5-3 and give the Twins some hope.  The hope was quickly dashed, however, as Chicago got the run back in the eighth.  Goins singled, Jon Jay walked, and Eloy Jimenez singled to make the score 6-3.

The Twins did threaten in the ninth.  Singles by Arraez, Cruz, and Rosario cut the lead to 6-4 and brought the winning run to the plate with two out.  But Sano struck out, and the game was over.

Notes:  Max Kepler was held out of the game, presumably due to lingering effects of his heat-related illness Sunday.  That means the Twins went with an outfield of Rosario-Cave-Marwin Gonzalez.  That's not a good defensive outfield.  It's hard to tell whether it made any difference--no defense can stop a three-run homer--but it certainly didn't help.

Cruz returned to the lineup as the DH.

Gibson pitched 6.2 innings, giving up five runs on six hits and one walk and striking out four.

This was not the way the start of the "soft spot in the schedule" was supposed to go.  Still, it's not realistic to expect the Twins to win every game, even against bad teams, and if the Twins win the next two to take the series, that would be an acceptable outcome.  It also seems like, as much as anything, the Twins simply had some bad luck.  They out-hit the White Sox 15-8.  They had twelve singles, two doubles, and a home run.  They also drew a walk.  And they were 3-for-9 with men in scoring position, so it's not like they weren't producing in the clutch.  Yet, they managed to score only four runs.  That's not very easy to do.  It's frustrating, but it's baseball, and it happens.  I'll go out on a limb, though, and predict that if the Twins get fifteen hits again tonight they will score more than four runs.

Record:  The Twins are 76-49, in first place in the American League Central, two games ahead of Cleveland.