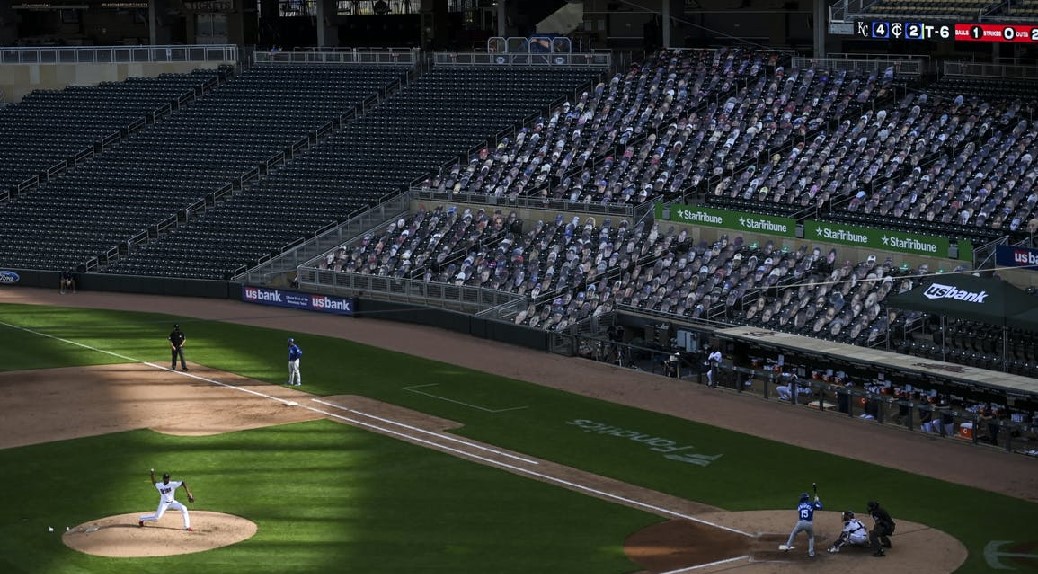 Batting stars:  Gene Larkin was 2-for-3 with a walk and a stolen base, his second.  Kirby Puckett was 2-for-5.  Chili Davis was 1-for-2 with two walks.

Opposition star:  Roberto Alomar was 2-for-4 with a double.

The Twins broke through in the fifth.  Davis led off with a walk, Shane Mack had a one-out single, and Greg Gagne delivered a two-run double.  The Twins later put men on second and third with two out and Chuck Knoblauch had a two-run single, putting the Twins up 4-0.

That was pretty much it, really.  Toronto drew a couple of walks in the sixth but could do nothing with them.  The Twins added a run in the ninth when Mack was hit by a pitch, was bunted to second, took third on a wild pitch, and scored on Newman's bunt single.

Notes:  Larkin was in right field, with Mack in left and Dan Gladden on the bench.  Larkin also batted leadoff.  He's obviously not someone you'd think of as a leadoff batter, but in 17 plate appearances there in 1991, he batted .385/.471/.538, and that will certainly work out of the leadoff spot.  For his career, he batted .339/.447/.516 in 76 plate appearances while batting first.  A small sample size, to be sure, but I think I might have put him there more often to see if he could keep it going.

Newman played third base in place of Mike Pagliarulo and Scott Leius.  Jarvis Brown pinch-ran for Larkin in the seventh and stayed in the game in right field.  Pedro Munoz pinch-hit for Kent Hrbek in the ninth.  Paul Sorrento came in to play first base in the ninth.

Toronto used seven pitchers in the game, three of them in the ninth inning.

Record:  The Twins were 92-62, in first place in the American League West, eight games ahead of Chicago.  They had clinched a tie for the division, and their magic number was now one.

Boston lost, so Toronto continued to lead the East by 3.5 games. 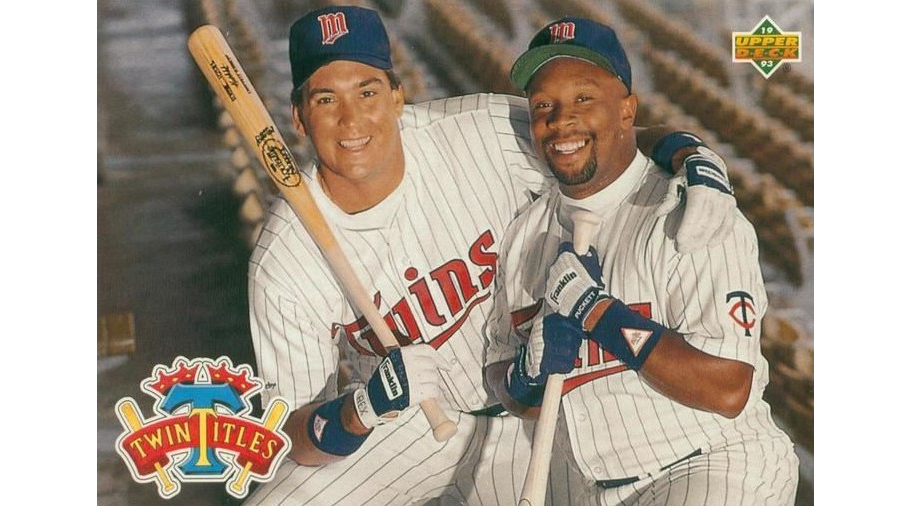 Batting stars:  Chuck Knoblauch was 3-for-5 with three RBIs.  Greg Gagne was 2-for-3 with a walk and two runs.  Kirby Puckett was 2-for-4 with a double, a walk, a stolen base (his eleventh), two runs, and three RBIs.  Kent Hrbek was 1-for-4 with a two-run homer, his nineteenth.

Opposition stars:  Wilson Alvarez pitched 5.1 innings of relief, giving up one run on two hits and two walks and striking out two.  Dan Pasqua was 1-for-2 with a two-run homer, his sixteenth.

The game:  The Twins scored early and often.  With one out in the first, Knoblauch singled and scored from first on a Puckett double.  Gene Larkin delivered a two-out RBI single to make it 2-0 Twins.  In the second, again with one out, the Twins got consecutive singles from Gagne, Dan Gladden, and Knoblauch to make it 3-0.  A ground out scored one run and Hrbek delivered a two-run homer to put the Twins up 6-0.  The game was pretty much over at that point.

They played the full nine innings, of course.  The Twins added a run in the fourth when Gagne singled, went to second on a wild pitch, and scored on a pair of infield grounders.  Meanwhile, the White Sox did not even get a baserunner until the sixth, when Craig Grebeck walked.  In the seventh, Robin Ventura walked and, with one out, Pasqua hit a two-run homer, Chicago's first hit of the game, to make the score 7-2.

The Twins added two more runs in the ninth.  Scott Leius singled, was bunted to second, and went to third on a wild pitch.  With two out Gladden walked, and RBI singles by Knoblauch and Puckett followed.

Notes:  Larkin started in right field in place of Shane Mack.  Junior Ortiz was behind the plate in place of Brian Harper.

This was pretty much the White Sox' last stand.  They were already eight games out, so they had to sweep to have any kind of chance at the division, and even then it would have been a long shot.  They had their ace, Black Jack McDowell, on the mound.  And the Twins came out and made him look like a bush leaguer.  His line was 1.2 innings, six runs, seven hits, one walk, and one strikeout.  This wasn't the official clincher, but it was officially just a matter of time at this point.

With the Twins leading 7-2 in the bottom of the eighth, Leius led off with a single and Ortiz followed with a sacrifice bunt.  That would seem like a huge violation of an unwritten rule.  I don't know if anyone cared--enforcement of unwritten rules is pretty random and capricious.  But I would think that someone at least made mention of it.

Record:  The Twins were 91-60, in first place in the American League West, nine games ahead of Chicago.  The magic number was three.

In the East, Toronto won and Boston did not play, so the Blue Jays' lead went up to two games.

Pitching stars:  Jack Morris struck out eight in seven innings, giving up two runs (one earned) on three hits and a walk.  Terry Leach pitched a perfect inning and struck out one.

The game:  The two teams combined for one hit in the first two innings, but that changed in the third.  Gene Larkin and Greg Gagne opened the inning with singles, followed by a walk to Leius to load the bases.  Al Newman then delivered a two-run double, Puckett had an RBI single, and Davis drove in a run with a ground out, making it 4-0.  The Twins weren't done.  Brian Harper singled and advanced on a throw, putting men on second and third.  Mack then struck a two-run single to make the score 6-0.

The Twins added some more in the fourth.  With one out, Leius singled and stole second (breaking an unwritten rule?).  Newman reached on an error, Puckett had another RBI single, and Davis hit a three-run homer to make the score 10-0.

It was never close after that.  The Red Sox got on the board on the bottom of the fourth when Jody Reed singled, went to second on a passed ball, and scored on Clark's RBI single.  Burks hit a home run in the fifth to make it 10-2.  Leius homered in the ninth and Clark homered in the ninth, and it ended up 11-3.

Notes:  Mack was again in left in place of Dan Gladden.  Larkin was in right, making his first appearance since July 1.  Newman started at second base in place of Chuck Knoblauch.  He batted second, with Leius in the number one spot.

Jarvis Brown went to center field in the sixth to replace Puckett.  Randy Bush entered the game in the eighth inning in place of Kent Hrbek.  He went to left, with Mack going to right and Larkin moving to first base.  Tom Kelly usually played Bush in right and Mack in left--perhaps the Green Monster changed his thinking for this game.  Knoblauch replaced Gagne at shortstop in the eighth.

I referenced this above, but I wonder if there was any comment about Leius stealing second with a six-run lead.  There shouldn't have been--it was only the fourth inning, they were in Boston, and the Red Sox had a pretty good lineup--but the unwritten rules are a tricky thing, and they seem to vary from year to year and team to team.

Morton, the Boston starter, lasted 2.1 innings, allowing six runs on six hits and a walk and striking out two.  Morton had pitched decently against the Twins five days earlier, but they certainly figured him out in the third inning of this game.

Oakland lost yesterday (when the Twins were idle) and lost to New York 3-2 today, so the Twins gained a game and a half on them.  The Athletics fell into a second-place tie with California, which defeated Cleveland 5-4.

Record:  The Twins were 52-38, in first place in the American League West, four games ahead of California and Oakland.