Someone on the webz said imagine having a band with D.L. Roth as the frontman, but the band is still named after the guitar player. That's about right.

Kickin' keytar solo in this one.

Is it Friday yet? 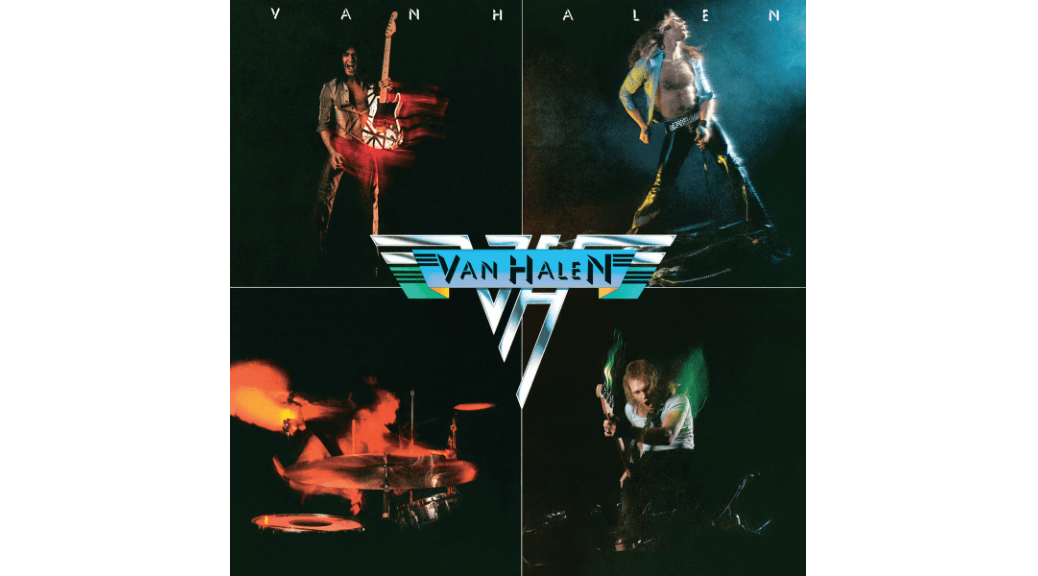 In 1978, heavy metal/hard rock was tired and bloated. It seemed like all rock bands were only interested in creating dirge-like long songs about mysticism or Satan and one couldn’t listen to a rock album without six minute organ suites and self-indulgent guitar solos that didn’t go anywhere. Rock was almost an afterthought as the Southern California light rock sound, disco, and nascent rumblings from the punk scene dominated popular music at the time.

It’s this background that Van Halen’s first album exploded on the rock scene. Short (no song is over 4 minutes), punchy rock songs that were fun but freakin’ rocked! Make no mistake, even though the songs weren’t about evil wood nymphs, this was metal as Eddie Van Halen’s guitar work and David Lee Roth’s screams was straight from the heavy metal handbook.

The album kicks off with Running with the Devil, a common theme in mid-70’s metal. But at the two-minute mark, you realize something is different as EVH’s short guitar solo screams for attention. Followed by Eruption, an extended guitar solo that kicks off a very muscular You Really Got Me and Van Halen has taken all of five minutes to grab you by the balls. This wasn’t your older brother’s metal.

Not only were the songs short and about partying and hitting up the chicks, they had 3-part harmonies, something unheard of in metal circles. David Lee Roth is a fine frontman and singer, and the rhythm section is top notch, but let’s face it, the album belongs to Eddie Van Halen. Every song has a scorching guitar solo that just wasn’t heard before. It’s style that’s been copied many times in the nearly 40 years Van Halen came out, but at the time it was mind blowing.

For me the highlight of Van Halen is Feel Your Love Tonight. This is a classic “I’m going to make you mine” song, but it’s so infectious, while also hard rocking you have to be practically comatose not to enjoy it. This song should be the national anthem to teenage Friday night (live version from 1977 below). Ice Cream Man is a song David Lee Roth had been singing since he was a teenager, while Eddie takes over the last third with another classic guitar part. Unfortunately the album ends with I’m on Fire, which is more a vehicle for Roth’s screaming, but by that time who cares, you’ve been thoroughly rocked.

Van Halen would change rock, not always for the better. While the tired old 8-minute drones fell by the wayside, unfortunately it was replaced by hair bands more interested in copying David Lee Roth’s sexual swagger or emphasizing the party, not the rock. Plus let’s face it, there is only one Eddie Van Halen. But let’s also not end up on a sour note. Van Halen came out when I was 15, which was probably the perfect age for that album. But I still listen to it fairly regularly and along with Cheap Trick Live at Budokan, one of the few albums I still have on a regular rotation from the era. If you like the rock,Van Halen should be in your music collection.

I think it’s a indisputable fact that Van Halen is one of the greatest rock albums ever. Eddie’s guitar work, lyrics about getting with the ladies, David Lee Roth’s bravado. It’s all here wrapped up in leather, barbed wire, and a whiff of Axe body spray. Unfortunately since they first hit the scene back in 1977-78, there’s not a lot of video of their original shows. Below isn’t exactly a video but you can listen to a great early version of Feel Your Love Tonight. It’s definitely faster than the studio version -- almost punk like. Not as polished as the album but damn is it exciting, To this day I still get goosebumps listening to this song.