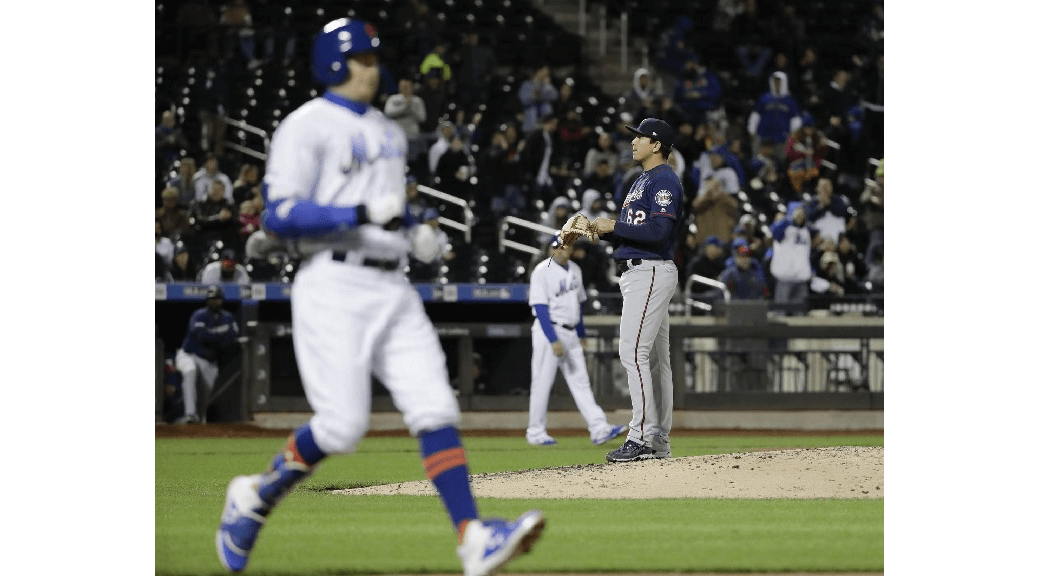 Pitching star:  Trevor May struck out two in a scoreless inning, giving up a walk.

Opposition stars:  Jeff McNeil was 2-for-4.  Michael Conforto was 1-for-3 with a walk and three RBIs.

The game:  It started out as a pitchers' duel.  Neither team even got a baserunner in the first two innings.  In the third, Schoop led off with an infield single, went to second on a sacrifice bunt, and scored on Kepler's two-out single to give the Twins a 1-0 lead.

It was still 1-0 going to the bottom of the fifth and Twins starter Jake Odorizzi appeared to be cruising.  Then, suddenly, the roof fell in.  With one out, McNeil singled and Amed Rosario and J. D. Davis both walked, loading the bases.  Odorizzi then threw one to the backstop, but McNeil was thrown out trying to score and it appeared the Twins might get out of the inning.  It was not to be.  Mets starter Noah Syndergaard walked to re-load the bases.  Odorizzi came out of the game, and Rocco Baldelli chose to bring in Andrew Vasquez, just up from AAA and the most recent fresh arm for the bullpen.  Vasquez hit Brandon Nimmo with a pitch, forcing in the tying run, and walked Pete Alonso and Robinson Cano, handing the Mets a 3-1 lead.  Trevor Hildenberger then came in and walked Conforto, forcing home another run, and gave up a two-run single to Wilson Ramos.  It was a six-run inning for the Mets in which they got just two hits, but it made the difference in the game.

The Mets added three more in the seventh, again aided by the base on balls.  Nimmo led off with a single, and again Alonso and Cano walked, loading the bases.  Conforto delivered a two-run single and McNeil singled home another run.  New York had a 9-1 lead and it appeared the game was over.

To the Twins' credit, though, they battled to get back into the game.  Garver led off the eighth with a single, went to second on a passed ball, and scored on a Schoop double.  Byron Buxton tripled and Jake Cave singled, making the score 9-4.  Kepler doubled and Jorge Polanco walked, loading the bases with still none out.  It looked like the Twins might make a game of it, but Willians Astudillo hit into a double play and Eddie Rosario grounded out, ending the inning with the Twins still trailing 9-5.

The Twins still weren't done.  Garver homered with one out in the ninth to cut the lead to 9-6 and Schoop followed with a single.  But Byron Buxton and pinch-hitter Ehire Adrianza each struck out and the game was over.

Notes:  We discussed the move to Vasquez extensively in the game log, and I see no reason to repeat that.  I did not hear the post-game press conference, so I don't know if Baldelli explained the decision or what his reasons might have been.  I assume he had reasons--despite our criticisms, managers rarely just make moves at random.  But at this time, it still makes no sense to me that you bring in the AAA guy with the game on the line.  I get saving guys for later in the game, but the plan was to use Martin Perez for multiple innings, so what are you saving those guys for?  Yes, many of them had pitched the game before, but most for less than an inning, so they surely could have pitched again.  If/when I hear what Baldelli's reasons were I'll consider them, but right now it still strikes me as a bad move.

I also don't understand sending Adrianza to bat to make the last out with Nelson Cruz on the bench.  Yes, it would've been nice to send Cruz up to represent the tying run, but that chance ended when Buxton struck out.  At this point you need at least two consecutive batters to come through to have a chance.  What's better:  Adrianza and then, if he gets on, Cruz, or Cruz and then, if he gets on, Kepler?  The latter seems better to me, and it doesn't seem all that close.  Again, if/when I hear Baldelli's reasons I'll consider them, but this just again seems like a clearly bad move.

Just for completeness, some stats:

The Twins out-hit the Mets 9-5.  It is not easy to score nine runs on five hits, but the Twins allowed the Mets to do it.

Record:  The Twins are 6-4, in third place in the American League Central, one game behind Detroit.

END_OF_DOCUMENT_TOKEN_TO_BE_REPLACED

Wasn't that a rally?