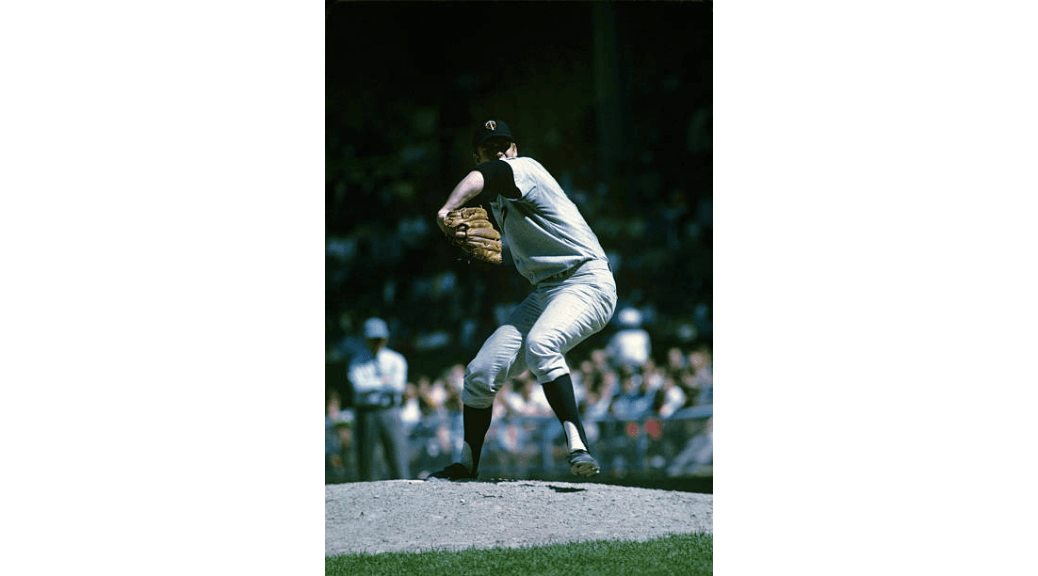 I used a random number generator to pick a season from the past with the idea that I would quickly highlight the Twins history that occurred today in that year.  The generator sent me to the year 2004.

The Tigers won the rubber-match of a three game series to improve to 5-1 on the early season defeating the Twins in 10 innings (after ending the previous season with just 43 wins).  The Twins rallied from an early 3-0 deficit to tie the game 5-5 before losing.  The Twins stranded at least two runners in the sixth, seventh, eighth, and ninth innings.  Henry Blanco tied the game in the eighth inning with an RBI double, but he was thrown out easily trying to reach third base.  Gleeman wrote, "The throw beat Blanco to the bag by about 10 feet and Blanco went 'sliding' into third with some sort of belly flow/somersault combination." The following batter, Cristian Guzman, doubled but was stranded when Nick Punto struck out to end the inning.

Asked about his aggressive baserunning after the game, Blanco explained, "I was out of gas. . . . I was trying to see what could happen.  Nothing happened."  He added, "Seems like every time you make a mistake on the bases, the next guy gets a hit and you pay for it."  Ron Gardenhire did not criticize Blanco's decision.  "The play's in front of him, and he's trying to play the game," Gardenhire said.  "We don't knock guys for trying to be aggressive."

The Tigers scored their first run when Craig Monroe scored all the way from first base when Lew Ford misplayed a Carlos Pena single.  Later, they scored the winning run when Joe Roa issued a one-out walk to Rondell White (aka The Insanity).  White was removed for pinch-runner Andres Torres who stole second base and then scored on Monroe's game-winning single.  "A game-winning single like that -- I can't describe how good it felt," Monroe said. "I'd never done anything like that before up here."

Joe Nathan did not pitch in the game, but he had pitched in four of the first five games of the season.  In fact, through the sixth game, Nathan, Roa, J.C. Romero, and Carlos Pulido had each appeared four times and Juan Rincon and Aaron Fultz had made five appearances.

Johan Santana lasted just five innings (and had thrown only nine innings in his first two starts).  He allowed a homerun to Pena in the fourth inning - his first homerun allowed to a left-handed batter in 70.1 innings dating back to the previous season.  Santana struggled to retire hitters once he reached two strikes.  In fact, Gleeman documented that Santana threw 32 pitches in his five innings after already having two strikes on the opposing batter.

Other Twins notes: The Twins signed Joe Beimel to a minor-league contract that day and assigned him to Rochester.  Beimel had a pathetic cup-of-coffee with the Twins in September, but then put together some pretty decent years after leaving the organization.  The loss was the team's third of the season.  In all three games, they had scored at least four runs.

A front-page story focused on the likely inability of the Twins and Vikings to contribute more than 25% to the cost of their new stadiums.  The Twins explained that paying for a large-chunk of the cost "could impair the club's ability to field a competitive team."  A stadium bill working its way through the legislature at the time would require the Twins to contribute one-third of the cost - an estimated $150 million - to the final stadium.

GM Terry Ryan expressed some concern that Joe Mays, after undergoing Tommy John surgery in September, was trying to rush his rehab.  "We've got to slow him down some," Ryan said.

Blanco was playing because Mauer had been attacked by the warning track behind the plate in the Metrodome and Matthew LeCroy strained his oblique.  Through his first fifteen plate appearances, Blanco somehow had hit 267/467/733.