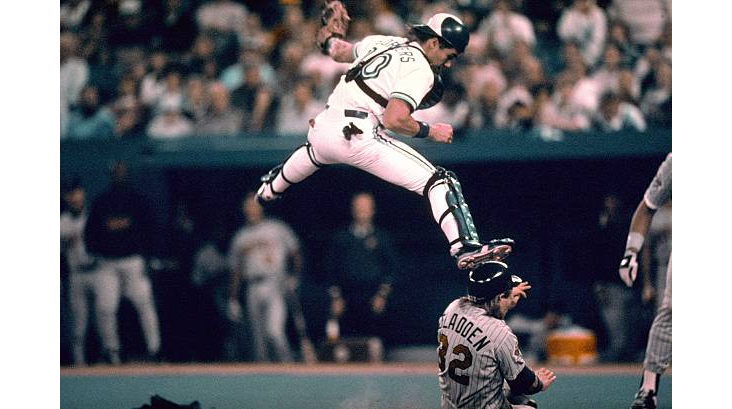 The game:  With two out in the second Candy Maldonado singled, went to second on a wild pitch, and scored on Borders' RBI single.  The Blue Jays had a major threat in the third.  One-out singles by White and Alomar and a double steal put men on second and third with Joe Carter and John Olerud coming up.  But Carter struck out and Olerud grounded out, so the game remained 1-0.

The Twins took over in the fourth.  Puckett led off with a home run, tying the score.  The home run kicked off a rally.  Davis hit a one-out double.  With two down, Shane Mack walked, Pagliarulo delivered an RBI single, Greg Gagne was hit by a pitch to load the bases, and Gladden stroked a two-run single to put the Twins ahead 4-1.

The Twins added to their lead in the sixth.  Brian Harper led off with a double and Pagliarulo scored him with a one-out double.  Gladden delivered an RBI single with two-out to make the score 6-1.  Doubles by Kelly Gruber and Borders cut the margin to 6-2 after six.  But the Twins got the run back in the seventh when Puckett got an infield single, went to second on a ground out, and scored on an error.

Notes:  Jarvis Brown pinch-ran for Davis in the ninth, so he was the one who actually scored the ninth run for the Twins.  Scott Leius pinch-hit for Pagliarulo in the ninth and stayed in the game at third base.

Morris bounced back from a less-than-stellar game one to pitch quite well in game four.  He threw 110 pitches.

Stottlemyre did not fare so well.  He surrendered four runs on seven hits and one walk in 3.2 innings.  He struck out three.

The Twins had won two consecutive road games to take a commanding 3-1 lead.  They were one win away from the World Series.  Could they put it away in game five?

Record:  The Twins led the best-of-seven series three games to one.