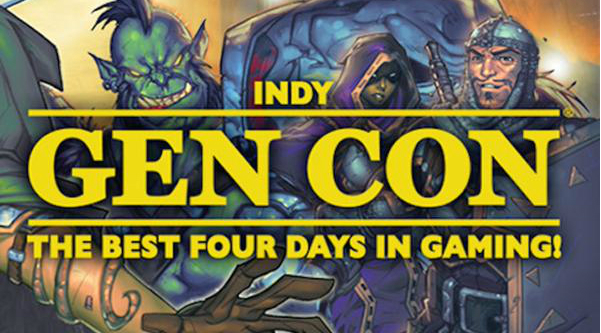 So, After I missed Geekway to the West earlier in May due to the challenges of fostering a 2 year old, my lovely, beautiful, generous wife brought up the possibility of me going to Gen Con.  I, of course, jumped at the opportunity and got to finally partake in the mega event.

I had a blast. I got to try out 18 never-before-played-by-me games, and got a good luck and countless others.  I also got to meet one of my favorite podcasters, Tom Vasel (who heads up the Dice Tower network).  Overall, it was a very fun  event, and I'd like to talk a little bit about it.

Thursday: I arrived on Thursday a little after noon.  Since hotels were pretty rare, my family and I took our pop-up camper to a Yogi Bear Campground east of Indy.  I stuck around in the morning to help set up, so I was a little late getting to the Con.  Once I got there, I had the pleasure of waiting in Will Call for my tickets.  It wasn't nearly as bad a line as people made it out to be.

Next, I checked out the main Exhibit Hall.  This area is MASSIVE.  Hundreds of game publishers, artists, gamers and cosplayers filled this hall.  Really, I could spend all 4 days just in this main exhibit hall.  The first thing I wanted to do was meet Tom Vasel, so I hauled buns to the other side of the Hall and said hello.  Once that was done, I could properly play games.

Note: I'll go over many of these games very quickly.  I plan on going into more detail about them every Monday in my CoC segment: Punman's Board Game of the Week.

The first game I tried out was Bottom of the Ninth.  A fun dice based baseball sim that I'll be checking out more once it's out for purchase (you could only pre-order it at the Con).  Next, I tried Lords of Vegas, which I liked enough.  Then on to Kingdom Builder (by the same guy that made Dominion). I ended my day's journey in the Exhibit Hall with Queen's Architect (which I shared about on Monday).  This was my favorite game, and I wish I could've played it more.

After the Exhibit Hall closed, I strolled over to the Event Hall and tried out a new game called Phoenix Covenant,which was billed as a combo of Final Fantasy Tactics and Magic the Gathering.  This was probably my least favorite game of the Con.  I was taught by the designers and I still felt like I was missing information about how to play the game.  I think it's still in beta stage, so hopefully the end product will be better.

Friday: I started in the Event Hall again and began with a full game of Five Tribes.  I'd been hearing a lot of buzz about this game ever since last  year's Con.  Lemme tell ya, it's earned it.  If you have a chance to play this, I recommend checking it out.

Next, I wandered the Main Exhibit Hall again, and tried out a game called Noir.  It was an interesting detective themed card game.  Next, I tried Mice and Mystics, which had been on my list for a while.  I have a feeling the theme of this game would be very fun for my kids, though I did not get into it as much as I thought I would.  Next I tried a game called Shear Panic about moving sheep around a pasture and getting points.  I thought the kids would end up liking it (and I was right), so I ended up buying it.  To close out my adventures in the Exhibit Hall, I tried Kennerspiel Des Jahres 2014 winner Istanbul.  Another top-notch game that's near the top of my wish list.

To end the day, I got in line for a live taping of the Dice Tower podcast.  500 event tickets were sold for an event held in a 400 chair room.  And I only had a generic ticket, which meant I was lower priority.  I made friends in the generic ticket line, and met this lovely couple who was celebrating their 10th Anniversary.   They talked about how they got a bunch of games really cheap by playing up their special day.  Anyway, I got to play a few rounds of a new game called Spyfall.  The Dice Tower folks have been raving about this one, but it didn't click with me very well.  After our game, the event line picked up, but even after everyone from that line was in, our line did not move.  We were concerned.  The husband of the Anniversary couple went up to talk to a guy to see what was going on.  A moment later he was waving toward us, but he stopped me and said only his wife could come with him, and we realized he had used the "It's our Anniversary" ploy on the ticket taker (son of a...).  Anyway, I did finally get in, and I had a blast watching the podcast live (they sang again!)

Saturday:  I arrived Saturday morning in the same parking lot I had been going to all week.  As I got out of my car, who should parked next to me but a colleague from work, who incidentally told me about the lot.  So we walked in and checked out Star Trek: Five-Year Mission together.  To my surprise, I really enjoyed the game.  Next, I played a game of Catan: Junior, mainly to get a Mayfair ribbon (demo 5 Mayfair games, get a coupon for 50% off), but also to see if it was something my kids would like.  Then I hopped into a five-player game of Steam.  Fun, deep, heavy game about building rails and shipping goods in Germany.  Good stuff.

After that I headed to one of the surrounding hotels to check out the Stonemaier Games room.  Stonemaier is based in St. Louis, and one of the designers (Jamey Stegmaier) is a friend of a friend.  They are also known for their kick-ass Kickstarter projects.  I played Viticulture, which, like Five Tribes, had been at the top of my want-to-play list.  After that, I stuck around and got to play a game that has yet to be released, Between Two Cities.  I also got a look at a big buzz game called Scythe, that has many gamers drooling already.  (The artwork has workers in a field while mechs are battling in the background.)

Sunday: Sunday was Family Fun Day, so after packing up the camper, we got there (kinda late) around 2 pm.  We only had a couple hours to check out the Exhibit Hall.  I showed the kids Shear Panic, and we ended up buying it with our 50% off coupon.  To finish it off, my son and I played Krosmaster Arena, which was fun, but a little steep in price.

Verdict:  I knew going in that Gen Con was big and boisterous and even expensive.  However, knowing these things helped me temper my expectations.  The spectacle of all the new games, the costumes (many of which were awesome), and the crowds were awesome to behold.  This was a bucket list thing for me, and I'm so glad I got to experience it.  I got to play a boatload of games, some brand new and not even available yet.  I got to meet designers for many of the games (one from Finland), and I got to do it on my schedule since I was by myself.  However, next time I go, I'll be bringing a friend or two.

So, that's been what I've been up to, what have y'all been playing?!