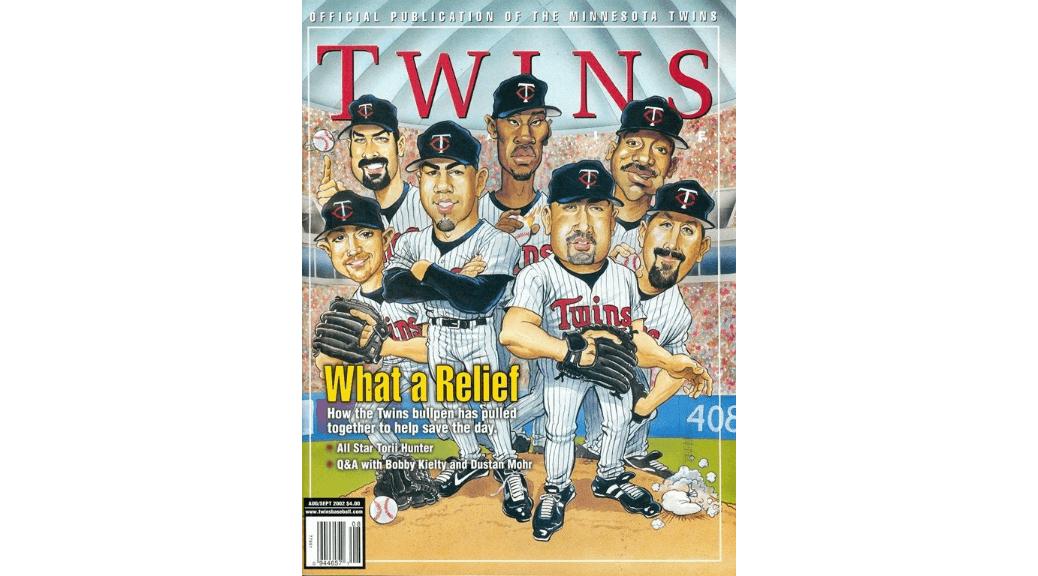 Pitching star:  LaTroy Hawkins pitched 1.1 scoreless innings, giving up one hit and striking out one.

The game:  Hunter doubled home a run in the top of the first to give the Twins a 1-0 lead.  The Brewers came right back with three in the bottom of the first, getting an RBI double by Hammonds, a run-scoring single by Stairs, and a ground out that scored the third run.  The Twins got three of their own in the top of the second, as Luis Rivas delivered a run-scoring double, Jones singled home a run, and Guzman had an RBI triple, putting the Twins up 4-3.  A. J. Pierzynski homered leading off the fourth to make it 5-3.  The lead held until the sixth, when Stairs came through with another run-scoring single and another productive ground out tied the score.  It remained tied until the eighth.  Singles by Houston and Jose Hernandez were followed by a sacrifice bunt that moved men to second and third.  Ronnie Belliard then produced a two-run single that made the difference in the game.  The Twins put men on first and third with two out in the ninth, but Doug Mientkiewicz struck out to end the game.

Notes:  There was no DH, so starter Rick Reed batted.  He went 1-for-3.  He pitched 5.1 innings, allowing five runs on eight hits and no walks and striking out one...MIlwaukee starter Glendon Rusch struck out seven in five innings, also giving up five runs on eight hits.  He walked two...Jones raised his average to .317...Hunter was hitting .300...Dustan Mohr was 1-for-4 to make his average .308...Pierzynski was 1-for-4 and was batting .330.  The home run was his third...The Twins were now 3-4 in interleague play...Memory says that Matt Stairs used to wear out the Twins, but in fact he didn't.  In 362 at-bats against them, he batted .262/.332/.478.  Not bad numbers, certainly, but right around his career averages of .262/.356/.477.  He did hit twenty-two home runs against the Twins, the highest total he had against any team.  On the other hand, he had more at-bats against the Twins than he had against any other team, too.  Stairs got an awfully late start to his career, not getting a full year in the majors until 1997, when he was twenty-nine.  He came to stay, though, sticking around until 2011, when he was forty-three.  In nine of those seasons he had an OPS of over .800 and in four of them he had an OPS of over .900.  He is in the Canadian Baseball Hall of Fame (born in St. John, New Brunswick), being elected in 2015 in a class that included Corey Koskie.  He will be the batting coach for the San Diego Padres in 2018.

Record:  The Twins were 37-30, in first place by four games over Chicago and Cleveland.