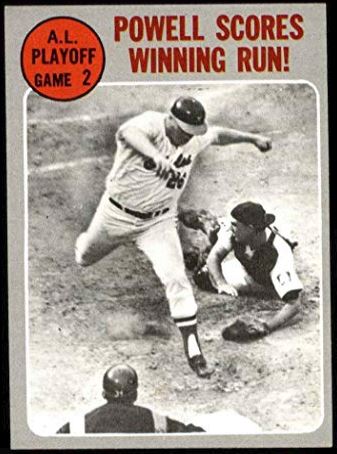 Batting stars:  George Mitterwald was 1-for-3 with a walk.  Harmon Killebrew was 0-for-3 with two walks.

Pitching stars:  Dave Boswell pitched 10.2 innings, giving up one run on seven hits and seven walks and striking out four.

The game:  The first threat came in the second, when singles by Powell, Brooks Robinson, and Johnson loaded the bases with none out.  Mark Belanger popped up, Andy Etchebarren flied to left, and McNally struck out, so the Orioles were turned aside.Baltimore again threatened in the third, as Frank Robinson hit a two-out double and went to third on a wild pitch.  Powell walked, but Brooks Robinson fouled out to end the threat.

The Twins had their first threat in the fourth.  Tony Oliva singled, stole second, and went to third on a fly ball.  Rich Reese popped up, Mitterwald walked, and Leo Cardenas fanned, and the game remained scoreless.

Nobody got a man past first until the eighth, when Frank Robinson hit a two-out double, but he was stranded at second.  In the ninth, Brooks Robinson led off with a walk.  A pair of force outs and a walk to Elrod Hendricks put men on first and second, but McNally was allowed to bat and flied out to end the inning.

In the eleventh, the Twins got two-out walks by Killebrew and Oliva, but Bob Allison lined out.  In the bottom of the eleventh, Powell walked and was bunted to second.  Johnson was intentionally walked and Belanger fouled out.  Boswell was removed for Ron Perranoski, who gave up a game-ending single to pinch-hitter Curt Motton.

Notes:  The Twins again went with Bob Allison in left and George Mitterwald at catcher, rather than Ted Uhlaender and Johnny Roseboro.  While it doesn't prove anything, the decisions haven't paid off--Allison is 0-for-8 and Mitterwald is 1-for-7.  Of course, the Twins have a total of just seven hits in the two games, so other than Oliva (3-for-9) no one was hitting much.

Killebrew was 0-for-5 with five walks.  I don't know if anyone was suggesting that he should expand his strike zone or that he was taking too many pitches.

Boswell suffered what was essentially a career-ending arm injury on the last pitch of the tenth inning, with which he struck out Frank Robinson.  He came out to pitch the eleventh and was able to retire two batters out of four, with the other two getting walks (one intentional).  He continued to pitch through 1971 but was never the same pitcher.  Boswell had pitched 256.1 innings in 1969.  I don't know how many pitches he threw in this game, but it had to be a lot.  People complain about pitchers not throwing enough these days, and there could be a point to be made there, but I'm very glad that nobody today abuses pitchers' arms the way they used to.

Of course, McNally threw a ton of pitches, too, and he had pitched 268.2 innings that year.  He had seven consecutive seasons in which he threw well over 200 innings per season.  Of course, that may be why he was done at age thirty-two.

It had to be incredibly frustrating to lose consecutive extra-inning games in the playoffs.  Still, the series would move to Minnesota for the next game.  Would things be different there?  We shall see.