George Stallings managed in the major leagues for thirteen years.  He is best remembered as the manager of the 1914 Miracle Braves.

END_OF_DOCUMENT_TOKEN_TO_BE_REPLACED 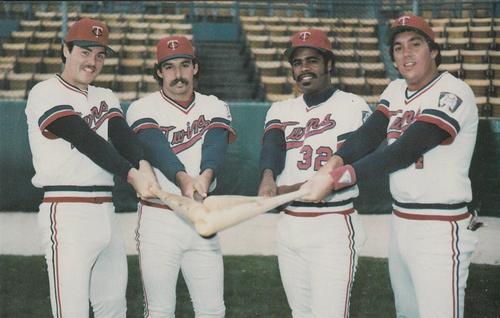 The game:  The Twins took the lead in the second.  Kent Hrbek led off the inning with a single and Ward had a one-out single-plus-error, putting men on second and third.  A wild pitch scored one run and a sacrifice fly scored another, putting the Twins up 2-0.

The Red Sox got on the board in the fourth, but missed a chance for a big inning.  Jim Rice reached on an error, and singles by Perez and Lansford loaded the bases with one out.  Stapleton delivered an RBI single, but Twins starter Brad Havens escaped further damage by retiring Glenn Hoffman and Gary Allenson on foul popups and striking out Reid Nichols.  It appeared to be just a temporary reprieve, however, as Boston scored three in the fifth to take the lead.  Jerry Remy led off with a single, and with one out Rice walked and Perez had an RBI double.  Lansford struck out, but Stapleton came through with a two-run single, giving the Red Sox a 4-2 advantage.

But the Twins came right back in the bottom of the fifth.  Wynegar led off with a double, Mitchell had a one-out RBI single, and Castino delivered a two-out run-scoring double, tying it 4-4.  The Twins took the lead in the sixth.  Their first two batters were retired, but they then put together six consecutive singles, by Ward, Wynegar, Randy Bush, Mitchell, Ron Washington, and Castino, producing five runs and giving the Twins a 9-4 advantage.  Ward hit a solo homer in the seventh to make it 10-4.

Boston must have been stunned.  They scored a pair of runs in the eighth, when Rick Miller and Remy walked and Evans hit a two-run triple, but that was it.  The Twins took the 10-6 victory.

Notes:  It was kind of a strange lineup for the Twins.  Washington was at second base, with Castino playing left field, one of five times in his career that he played there.  The DH was Jesus Vega.  Mitchell had taken over center field from Jim Eisenreich.  Ward, normally in left, moved to right.

Bush pinch-hit for Lenny Faedo in the sixth inning.  He then went to left field, with Castino moving to second base and Washington going to shortstop.

Ojeda was not the Bob Ojeda he would become.  He was twenty-four, but had still not had a full season in the majors.  He would finish this season 4-6, 5.63, 1.58 WHIP in 22 games, 14 starts.  He'd had ten solid starts in 1981, which had gotten him third place in the Rookie of the Year voting (behind Dave Righetti and teammate Rich Gedman).  He would improve from 1982, but would not really become a star until his trade to the Mets after the 1985 season.

The Twins win snapped a five-game losing streak.  They had lost nine of ten before this game.

The Red Sox were 21-10, in first place in the American League East, three games ahead of Detroit.  They would finish 89-73, in third place, six games behind Milwaukee.