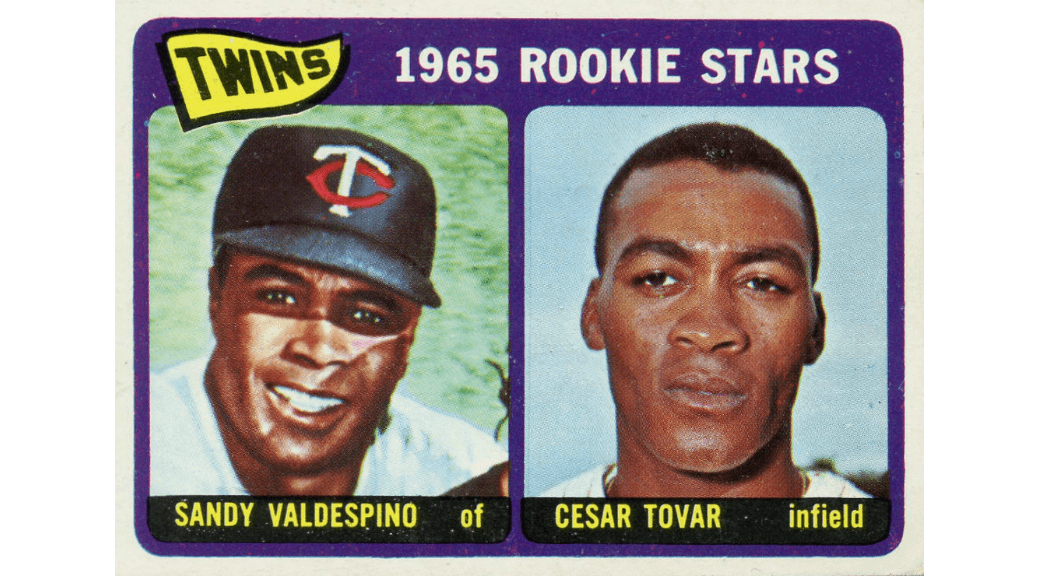 Batting star:  Cesar Tovar was 2-for-3 with a two-run homer (his second) and two runs.

Pitching star:  Luis Tiant pitched a five-inning complete game, giving up one run on four hits and two walks and striking out two.

Opposition star:  Carlos May was 1-for-2 with a double.

The game:  Tovar led off the bottom of the first with a single, went to second on a ground out, and scored on a Tony Oliva single.  There were no real threats until the fourth, when Luis Aparicio hit a one-out single and scored from first on May's double, tying it 1-1.  In the fifth, Leo Cardenas hit a one-out single and was bunted to second.  Tovar then hit a two-run homer to put the Twins up 3-1.

The third out was made, the inning ended, and then so did the game.  It doesn't say, but it seems likely that weather ended the game after five innings.  It also seems likely that the White Sox were not very happy about the game ending right after the Twins took the lead.

Notes:  Paul Ratliff was behind the plate, giving George Mitterwald his first day off of the season.

Horlen also pitched a five-inning complete game, giving up three runs on seven hits and one walk and striking out one.

Record:  The Twins were 8-2, in first place in the American League West by percentage points, but tied in games with California.

Opposition stars:  Bob Welch pitched a complete game, giving up one run on seven hits and two walks and striking out five.  Rickey Henderson was 1-for-3 with a walk and a stolen base, his thirty-fifth.  Terry Steinbach was 1-for-3 with a double and a walk.

The game:  There was no score through two.  Harper led off the third with a double.  He was still on second with two out, but Chuck Knoblauch delivered an RBI single to give the Twins a 1-0 lead.  Unfortunately, that was the only run the Twins would get.

In the bottom of the third Mike Gallego singled and Rickey Henderson walked, putting men on first and second with two out.  Dave Henderson then singled to tie it 1-1.  In the fourth Steinbach doubled and scored on a two-out single by Mark McGwire to give the Athletics a 2-1 lead.  The Twins had a chance to tie it in the seventh when Davis led off with a double.  Harper drew a one-out walk, but a strikeout/throw out double play ended the inning.

Oakland got an insurance run in the eighth without getting a hit.  With one out, Jose Canseco was hit by a pitch and stole second.  Harold Baines was intentionally walked.  A wild pitch moved the runners up and led to another intentional walk, this time to Steinbach.  Brook Jacoby then hit an RBI ground out to make it 3-1.

The Twins got a two-out single from Davis in the ninth, bringing the tying run to bat, but Shane Mack flied out to end the game.

Both pitchers threw a complete game and neither team used a substitute.  The ten players on each side who started the game finished the game.  I don't know how unusual that is, but it's definitely unusual.  Morris threw 132 pitches, Welch 121.

The White Sox lost to Baltimore 3-0, so the gap between the two remained the same.

Record:  The Twins were 61-43, in first place in the American League West, two games ahead of Chicago.