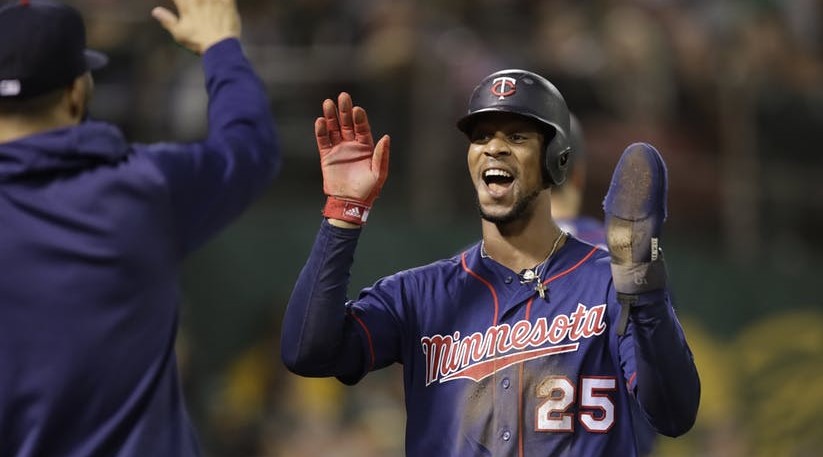 The game:  Khris Davis reached on an error to start the bottom of the second.  Mark Canha walked and Laureano hit a three-run homer, and that quickly the Athletics led 3-0.  Oakland had chances to add to their lead, but could not take advantage of them.  Marcus Semien opened the third with a double but did not score.  Laureano and Grossman led off the fourth with singles but a force out and a double play ended the inning.  Still, the Athletics led 3-0 through five.

The Twins then pecked away, as Dazzle likes to say.  Singles by Jonathan Schoop, Max Kepler, and Garver produced a run in the sixth.  Singles by Arraez and Ehire Adrianza were followed by an error to make the score 3-2.  Polanco hit a two-out homer in the eighth to tie it 3-3.

Each team missed chances in the extra frames.  Oakland started the tenth with two walks but did not score.  The Twins had men on first and third with one out in the eleventh and did not score.  The Twins broke through in the twelfth, though.  Byron Buxton and Kepler drew one-out walks and Garver followed with an RBI single to give the Twins their first lead at 4-3.  A double play took them out of the inning.  Would the lead hold up?

Obviously it did, but the Athletics made it interesting.  Matt Chapman reached on an error to start the inning.  With one out, Jurickson Profar singled, sending Chapman to third, but Profar was thrown out trying to make second, so there were two down with the tying run ninety feet away.  He stayed there, as Canha struck out to end the game.

Arraez was in left field, and while I still don't like playing infielders in the outfield I gather he's done okay there.  Of course, you'll put up with less defense from a guy who bats .431.  Adrianza was at shortstop, with Polanco the DH and Nelson Cruz out of the lineup.

I am pleased to see Liam Hendriks pitching well.  I still feel like the Twins didn't give him much of a chance, although I have to admit that he didn't do much with the chances they did give him.  When the Twins waived him after the 2013 season, I doubt that anyone in the front office thought he'd still be pitching in 2019, but here he is.  Good for him.

The Twins made two more errors last night.  I don't have time to go back and count, but they've made an awful lot of errors in recent weeks.  I don't know what happened to that excellent defensive team we had the first couple of months of the season, but I sure wish they'd come back.  Injuries have played a part, of course, but that's not a complete excuse.

The Twins still managed to avoid losing three games in a row.  Of course, it's been about three weeks since they won three in a row.  It would sure be nice to see them put together a little winning streak here before the all-star break.

Record:  The Twins are 54-31, first in the American League Central, seven games ahead of Cleveland.