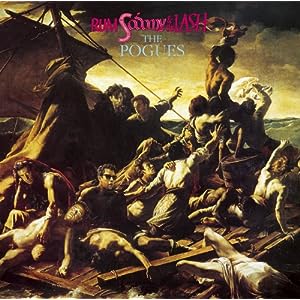 By 1985, punk rock was storming off in all sorts of musical directions. There was proto-punk, country-punk, art-punk, dance-punk, and hardcore-punk. One of the more interesting sub-genres was Irish or Celtic-Punk. Irish Punk was thought of as Irish folk songs or Irish folk-inspired songs revved up to a punk like speed. Locally, the band Boiled in Lead was a fantastic purveyor of traditional Irish music with a punk sensibility. Nationally, however, The Pogues were front in center and Rum, Sodomy & the Lash was the album you had to have if you were into Irish or Punk music.

The Pogues were a perfect Irish band: You had the lead singer, Shane MacGowan - skinny, horrible teeth, hard drinking, gravelly voice; a band with upwards of 7 to 10 members, depending on who was sober or healthy at the time, and a bunch of traditional Irish songs. The album was a blast with songs about drinkin', bleak industrial city living, Jessie James, war, lovers who left, and drinking. The album kicks off with The Sickbed of Cuchulainn an Irish romper sing-along. Dirty Old Town is exactly about what the title says: what it is like living in an old industrial-era city that is crumbling around you. The songs open with the classic line: "I met my love by the gas works wall..." You get the picture.

Other favorites include Sally MacLennane which again is fast, fiesty sing-along. I'm sure this was sung at many going away parties. The highlight of the album is The Band Played Waltzing Matilda which describes an Australian's horrifying experience fighting the Turks in WWI. One of the strongest anti-war songs ever written and it makes me think sadly of our soldiers coming back from Iraq or Afghanistan with broken bodies, never again able to dance.

The album is a fun, singable, danceable ride. The musicians are top notch and the songs are a great combination of old and new Irish songs. A bunch of these songs would be perfect for any party tape, wedding dance, or just to listen to get the blood pumpin'. For that reason Rum, Sodomy & the Lash I consider a classic album.  What do you think?