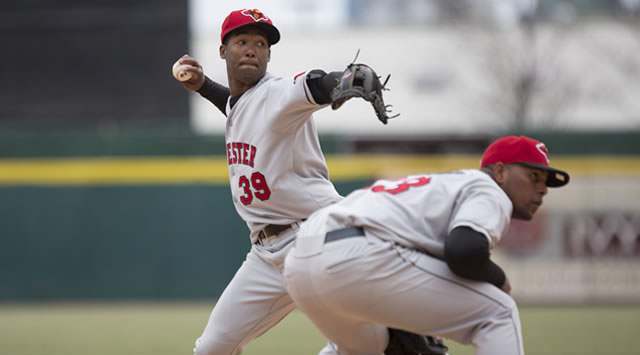 A big day for Danny Santana isn't enough for the Red Wings.  Heiker Meneses and Greg Peavey lead the Lookouts to victory.  Mat Batts has a fine game in a rain-shortened win.  Felix Jorge pitches well in a Kernels loss.  Emmanuel Morel and Huascar Ynoa lead the DSL Twins.

Pitching star:  A. J. Achter struck out two in two shutout innings, giving up one hit.

The game:  The Red Wings got single runs in the third and fourth, both on errors, to go ahead 2-0.  Diaz tied it with a two-run homer in the fifth, but the Red Wings got the lead back in the bottom of the fifth on doubles by Santana and Arcia.  It didn't last long, as Broxton hit a two-run homer in the sixth to give the Indians a 4-3 lead.  The Red Wings got a pair of two-out singles in the bottom of the sixth but did not threaten after that.  The Indians added an insurance run in the eighth.

The game:  Meneses singled in a run in the second to put the Lookouts up 1-0.  It was 2-0 after five, and the Lookouts put together a three-run rally in the sixth to put the game out of reach.  Meneses had a two-run triple in the inning and scored on a sacrifice fly.  The Generals did not get on the board until the ninth, when Peterson hit a two-run homer.

Batting stars:  Chad Christensen was 2-for-2 with a double, scoring once and driving in one.  Engelb Vielma was 1-for-2 with a run and an RBI.

Pitching star:  Mat Batts threw a five-inning complete game shutout, giving up four hits and a walk with one strikeout.

Opposition star:  Dominic Ficociello was 2-for-2.

The game:  The Miracle scored one on a double play in the first and added three in the second.  The Flying Tigers had men on first and third with two out in both the first and fourth.  The game was called after five innings due to rain.

Pitching stars:  Felix Jorge pitched eight innings, giving up two runs on four hits and a walk with four strikeouts.  Cameron Booser struck out two in a scoreless inning, giving up a walk.

Opposition stars:  Johan Mieses was 1-for-4 with a home run, his fifth.  Kelvin Ramos was 1-for-3 with a double and a run.  Brandon Martinez pitched six shutout innings, allowing two hits and no walks with one strikeout.

The game:  There was no score until the sixth, when Mieses hit a two-out homer to give the Loons a 1-0 lead.  It was 2-0 going to the bottom of the eighth, when the Kernels had their best chance, loading the bases with one out.  All they could get was a sacrifice fly, though, cutting the lead to 2-1.  Doe hit a two-out double in the ninth, but that was as close as the Kernels would come.

Opposition stars:  Anthony Dirocie was 1-for-1 with a double and three walks, driving in one.  Miguel Patino was 1-for-3 with a walk and a run.

The game:  Cuesto's two-run single capped a three-run first for the Twins, giving them a 3-0 lead.  The Twins added two in the fifth to make it 5-0.  The Mets1 got one in the sixth and three in the seventh to cut the lead to 5-4, but the Twins got two back in the bottom on the seventh on a Morel triple, a Jorge Munoz single, and a Parra double.  The last six Mets1 batters were retired.

Of note:  Jean Carlos Arias was 1-for-3 with a double, scoring twice and driving in one.  Antonio Tovar was 1-for-4 with a run and an RBI.  Edgar Herrera was 0-for-3 with a walk.