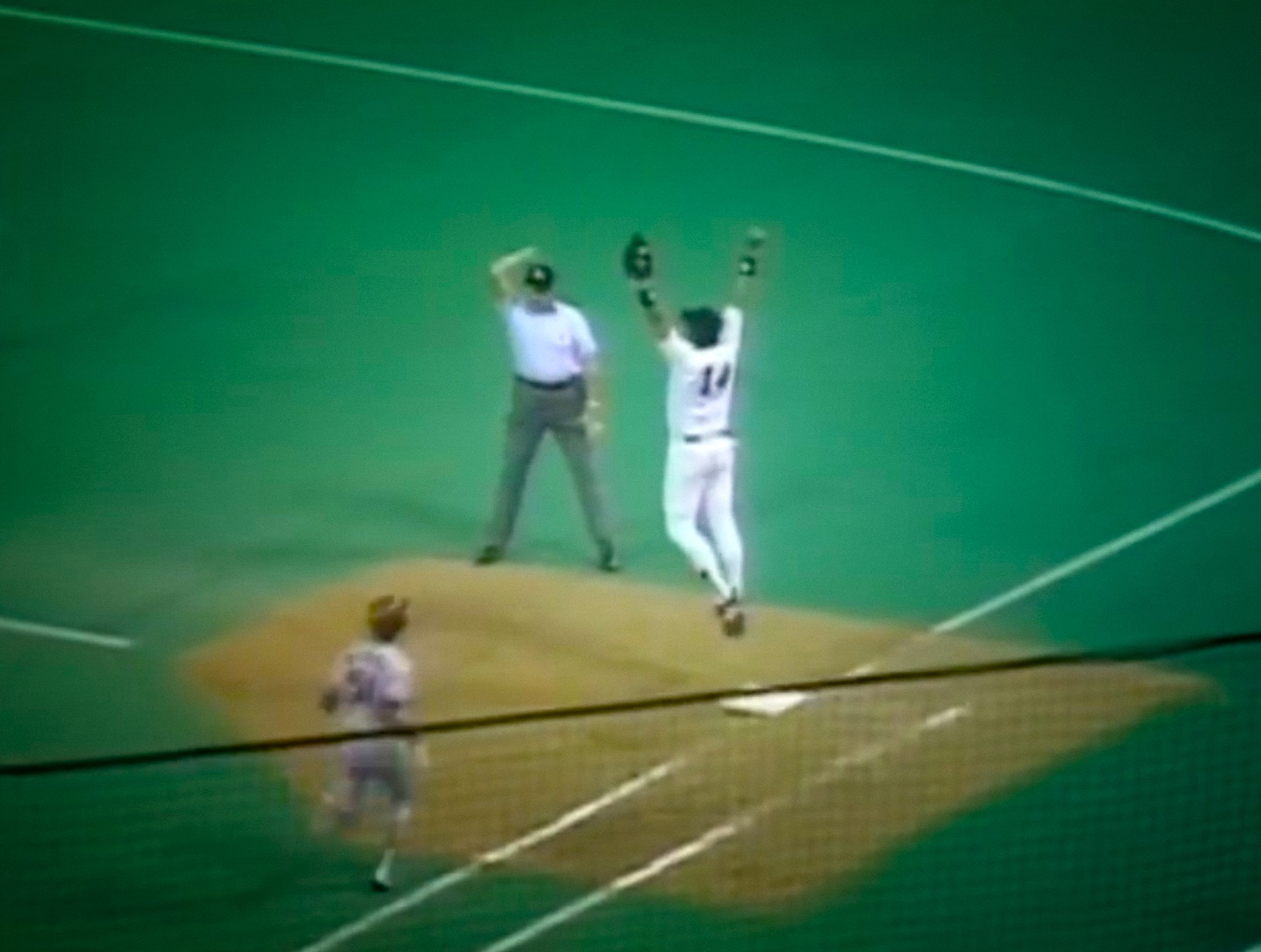 Opposition stars:  Tony Pena was 2-for-3 with a double, a stolen base, and an RBI.  Todd Worrell pitched three innings of relief, giving up one run on three hits and a walk with two strikeouts.  Steve Lake was 1-for-3 with an RBI.

The game:  St. Louis took the lead in the second inning.  They opened the inning with consecutive singles by Jim Lindeman, Willie McGee, and Pena to take a 1-0 lead.  The next two batters were retired, but Lake came through with an RBI single to make it 2-0 Cardinals.  That was all St. Louis would get, as Viola retired the next eleven batters and would give up only two more hits over the next six innings.

The Twins got one of the runs back in the bottom of the second.  Don Baylor was hit by a pitch and Tom Brunansky singled.  With one out, Laudner singled, but Baylor was thrown out at the plate.  Steve Lombardozzi followed with another single to make it 2-1.

It stayed 2-1 until the fifth.  With one out, Greg Gagne got an infield single.  It was the first hit the Twins had gotten since the second inning, but Whitey Herzog pulled starter Joe Magrane in favor of Danny Cox, who had started Game Five.  It didn't work, as Puckett drove his first pitch into deep left-center for a double, scoring Gagne and tying the game.  The Twins ran themselves out of a bigger inning.  Gary Gaetti walked, but Puckett was thrown out at third on the front end of a double steal and Gaetti was thrown out at home trying to score on a Baylor single.  Still, the score was tied after five innings.

The Twins took the lead in the sixth.  Cox opened the inning with walks to Brunansky and Kent Hrbek and was removed for Todd Worrell.  With one out, Worrell walked Roy Smalley to load the bases.  Dan Gladden struck out, but Gagne got another infield single, scoring Brunansky with the go-ahead run.  The Twins got an insurance run in the eighth, as Laudner got a one-out single and scored from first on Gladden's two-out double.  Reardon came in to pitch the ninth and retired Tom Herr on a fly to center, Curt Ford on a popup to third, and Willie McGee on a grounder to third to win the game and give the Twins their first World Championship.

Notes:  The quick hook for Magrane appears to have been based solely on the fact that he was a rookie.  He was pitching well at the time, and appears to have been the Cardinals best starting pitcher in 1987 (best ERA, best WHIP, best FIP, most strikeouts per nine innings).  Bringing in Cox, who was pitching on two days' rest, had not pitched in relief all year, and had a WHIP of 1.48 in 1987, does not appear to have been a smart decision...This was the only start of the postseason for Steve Lake.  Tony Pena, the regular St. Louis catcher, was used as the DH...I remember thinking at the time that I would have left Viola in to pitch the ninth.  He had thrown 105 pitches, which was not considered as high a total then as it is now, and was pitching well.  I couldn't argue with the results, however...Reardon had an excellent World Series, pitching 4.2 innings over four games and giving up no runs on five hits and no walks with three strikeouts...Puckett batted .357/.419/.464 for the World Series...Baylor batted .385/.467/.615 in fifteen plate appearances...Tim Laudner batted .318/.444/.500...Lombardozzi batted .412/.474/.647 in nineteen plate appearances.

THE MINNESOTA TWINS ARE WORLD CHAMPIONS!!!!!