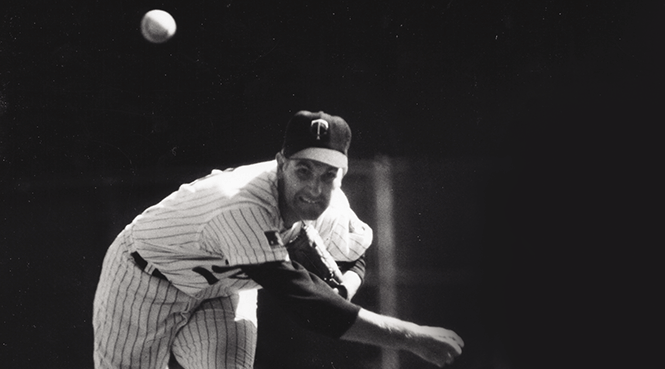 Batting stars:  Jim Perry was 2-for-3.  Johnny Roseboro was 2-for-4.  Harmon Killebrew was 1-for-3 with a home run (his thirty-eighth) and a walk.  Ted Uhlaender was 1-for-4 with a three-run homer, his seventh.

The game:  It was scoreless until the bottom of the third.  Leo Cardenas led off the third with a walk and Perry singled.  Uhlaender then hit a three-run homer to make it 3-0 Twins.  Later in the inning Killebrew homered to take the lead to 4-0, which was all the Twins would need.

Perry was in complete control for seven innings, allowing just three singles and only once allowing a man to get to second base.  He perhaps tired in the eighth, giving up consecutive singles to Dalton Jones and Gibson.  He struck out Dick Schofield, but then gave up back-to-back RBI singles to Syd O'Brien and Mike Andrews.  Perranoski came in to get a double play and end the inning.  The Twins got the runs back in the bottom of the eighth, as Cesar Tovar reached on an error, Killebrew walked, and Rick Renick and Roseboro delivered two-out RBI singles.

Boston got only a one-out single in the ninth.

Notes:  It was again Uhlaender in center, Tovar at second, and Graig Nettles in left.  Uhlaender extended his hitting streak to thirteen games with his home run.

Boston's starter was Vicente Romo, who pitched four innings and allowed four runs on three hits and three walks and struck out two.  Romo was generally a relief pitcher, but he made 11 starts for the Red Sox in 1969 and 10 in 1970.  He wasn't very good at it--for his career as a starter he was 7-10, 4.39, 1.42 WHIP and averaged less than five innings per start.  As a reliever he was 25-23, 52 saves, 3.04, 1.28 WHIP.  He played for several different teams.  He made his major league debut with the Dodgers in 1968 as a rule 5 selection, but was returned to Cleveland after one appearance.  He was with the Indians until April of 1969, when he was traded to Boston.  He was traded to the White Sox just before the 1971 season and was traded to San Diego after the 1972 campaign.  He stayed with the Padres through 1974.  He then went to Mexico from 1975-1981.  Surprisingly, he had a major league swan song, pitching quite well for the Dodgers in fifteen games in 1982.  He went back to Mexico for four more seasons before his playing career ended in 1986.  He continues to be a coach in Mexico.  I don't know why he moved around so much, but he looks like he was a pretty good reliever.

Record:  The Twins were 79-52, in first place in the American League West, 4.5 games ahead of Oakland.  I believe that's the largest lead they've had so far.