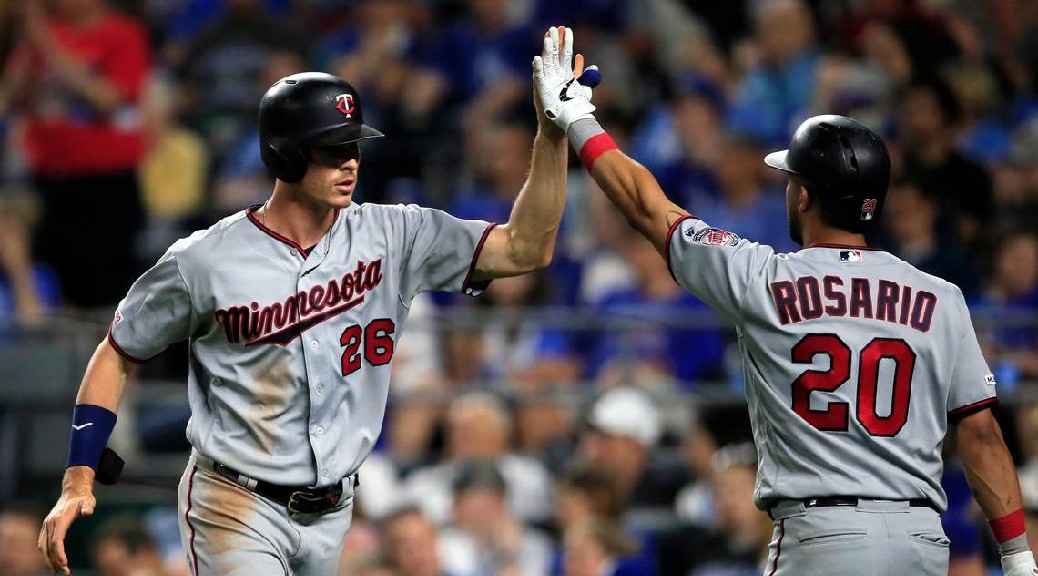 The game:  In the bottom of the first, a pair of walks put men on first and second with two out.  Cuthbert then doubled home one run, an error allowed a second run to score, and Martin Maldonado's RBI single made it 3-0 Royals.

The Twins came back.  Cron homered leading off the second to make it 3-1.  In the fifth, Schoop led off with a single.  He was still on first with two out, but then Nelson Cruz walked and Rosario delivered an RBI single to make it 3-2 and put men on first and third.  Rosario then stole second and Cruz was able to score on a throwing error, tying the score 3-3.

It didn't stay tied long.  In the bottom of the fifth Whit Merrifield walked and Nicky Lopez was hit by a pitch.  A pair of strikeouts gave hope that Martin Perez might get out of the inning, but Cheslor Cuthbert, whose name sounds like he ought to be sitting around the smoking room of the Drones Club having a drink with Bertie Wooster rather than playing major league baseball, hit a three-run homer to put Kansas City back up 6-3.

The Twins again battled back.  In the seventh, singles by Max Kepler and Jorge Polanco were followed by a wild pitch, putting men on second and third with none out.  Cruz then delivered a two-run single to cut the margin to 6-5.  In the eighth, Sano led off with a home run to tie the score.  Pinch-hitter Mitch Garver walked and was replaced on the basepaths by pinch-runner Willians Astudillo.  Singles by Schoop and Kepler gave the Twins the lead 7-6.  Men were on second and third with none out.  Twice the Twins put the contact play on only to have their batter hit back to the pitcher, putting men on first and third with two out.  Rosario came through, however, getting a run-scoring single to give the Twins an insurance run at 8-6.

They needed it, as Soler led off the bottom of the eighth with a home run.  Cuthbert then singled, but Rogers came into the game at that point.  There was a scare in the bottom of the ninth, when an error by right-fielder Astudillo put the tying run on base with one out, but a line drive double play ended the game.

Kepler was again in center, with Jake Cave in right.  Garver pinch-hit for Cave in the eighth inning, with Astudillo coming in to play right in the bottom of the eighth.

Martin Perez continues to struggle.  He hasn 't posted a game score above fifty since May 17.  In that span, he has posted an ERA of 5.66.  Whatever magic he had since mid-April to mid-May is gone.  We may be approaching the time to give Devin Smeltzer or someone else a shot at the fifth starter position.

For all the criticism of Sano, it's worth noting that Cave is 0-for-15 with eight strikeouts since coming back.  I understand that the expectations for the two are far different, but their outs count exactly the same.  Sano at least has the ability to hit the long ball, as he did last night to tie the score.

I love Harper, but he's been struggling in June.  Mainly, he's been hurt by the home run ball.  In eight innings he's given up four runs and three of them have been home runs.  At least they've all been solo homers, which as we all know don't hurt you.

In the Twins' recent down stretch, which to me started with last weekend's Kansas City series, they are 4-4.  It seems to me that a down stretch during which you still play .500 ball is a good sign.  Yes, it's helped that they've played the Royals in several of those games.  Still, I see no reason to think they won't start to play better again, and they're weathering the stretch of worse play pretty well so far.

Record:  The Twins are 49-26, first in the American League Central, nine games ahead of Cleveland.