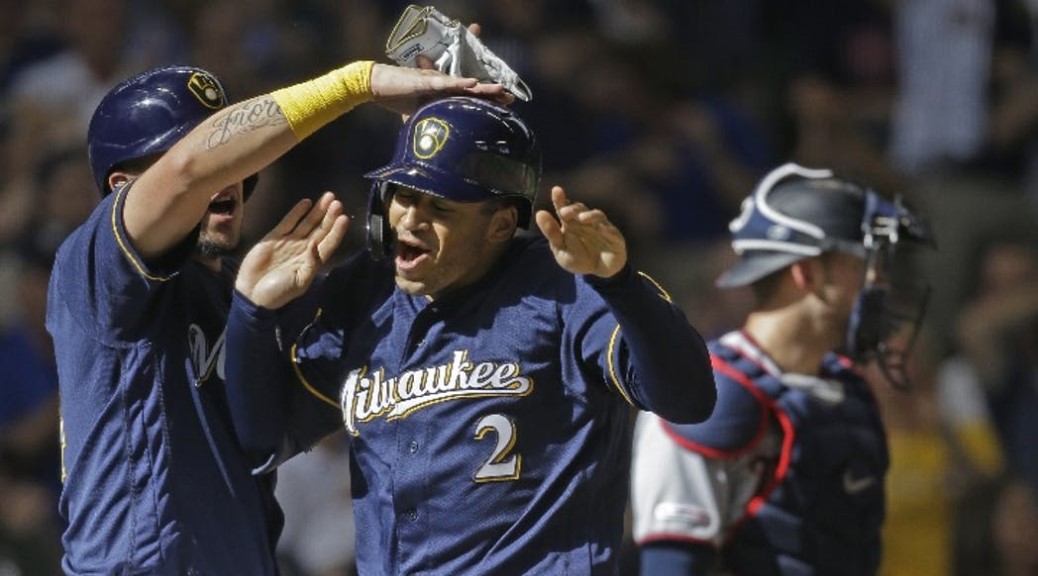 The game:  It looked good for quite a while.  Garver led off the game with a home run and Rosario hit a two-out homer to give the Twins a 2-0 lead in the first inning.  The Brewers got one back in the bottom of the first when Grisham singled, Yasmani Grandal walked, and Hiura delivered an RBI single.

Each team scored once in the third.  Sano hit a one-out homer in the top of the inning.  In the bottom, a one-out single by Hiura and two-out singles by Lorenzo Cain and Thames made the score 3-2.

With one out in the top of the fourth, Max Kepler walked, Jonathan Schoop doubled, and Kyle Gibson walked to load the bases.  Garver struck out, but Jorge Polanco came through with a two-run single to put the Twins up 5-2.  Milwaukee again got one back in the fifth when Mike Moustakas doubled and scored on a Thames single.

The score stayed 5-3 until the eighth.  Ryan Braun led off by reaching on a Polanco error.  Hernan Perez singled and Grisham followed with a three-run homer, giving the Brewers their first lead of the day at 6-5.  The Twins tried to rally in the ninth.  With two out, walks to Polanco, Sano, and Rosario loaded the bases.  Unfortunately, Matt Albers then found the strike zone again and retired C. J. Cron on a deep fly to center to end the game.

Notes:  Kepler remained in center and Marwin Gonzalez in right with Byron Buxton out.  Schoop was at second base rather than Luis Arraez, who was used as a pinch-hitter in the ninth.  Arraez went 0-for-1 and is batting .348.

It's probably past time to admit that Gibson is never going to take that step forward and become a top pitcher.  He is what he is--an average major league starting pitcher--and as he approaches his thirty-second birthday it's unlikely that he'll ever be more than that.  That's not a criticism, exactly.  There's value in being an average major league starting pitcher.  Teams have missed the playoffs because they didn't have one.  But I think a lot of the frustration with him comes from people thinking that he could be better than that and that he ought to be better than that.  It's just not likely to happen.  It's time to simply accept what he is.

The good news, though, is that the Twins are still a half game up on Cleveland.  They don't have to win a specific number of games or achieve a certain winning percentage to win the division.  They just need to win one more game than Cleveland does in the last forty-two games of the season.  We'll see if they can.

Record:  The Twins are 72-48, in first place in the American League Central, a half game ahead of Cleveland.