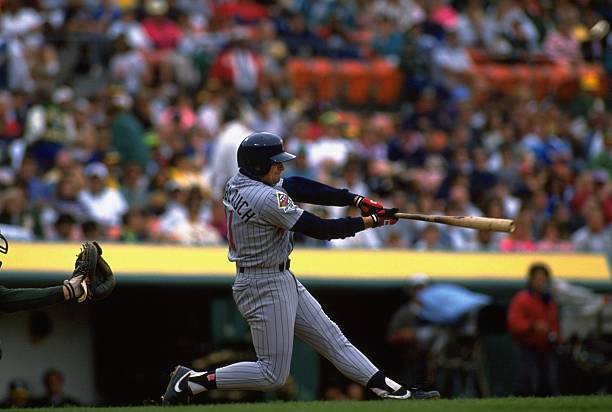 Opposition stars:  Harold Baines was 2-for-4 with a triple.  Lance Blankenship was 1-for-2 with a walk.

The game:  The Twins missed a chance in the first.  With one out, Knoblauch walked and Puckett singled.  With two out, Chili Davis walked to load the bases, but a fly out ended the inning.  Each team put men on first and second in the fourth, but it remained scoreless until the fifth.

In the bottom of the fifth, Puckett tripled and scored on a ground out to give the Twins a 1-0 lead.  The Athletics then broke through with four in the top of the sixth.  Willie Wilson doubled and scored on a Jose Canseco single to tie it 1-1.  Baines then tripled to give Oakland a 2-1 lead.  Terry Steinbach singled him home, and singles by Mark McGwire and Blankenship plated another run, making it 4-1 Athletics.

The Twins responded in the bottom of the sixth.  Mike Pagliarulo led off with a single.  Singles by Larkin and Greg Gagne loaded the bases with one out.  Dan Gladden singled one home, Knoblauch cleared the bases with a triple to give the Twins the lead, and Hrbek singled him home to provide an insurance run at 6-4.

Oakland did not get a hit the rest of the game.  The Twins got an insurance run in the eighth when Gladden was hit by a pitch, Knoblauch singled, and Puckett hit a sacrifice fly.

Notes:  Puckett started in center, with Larkin in right.  Shane Mack came in for defense in the eighth, playing center with Puckett moving to right.

Morris threw 124 pitches.  Stewart was allowed to give up all seven runs in seven innings. giving up twelve hits and three walks while striking out six.  He threw 134 pitches.  Yes, men were men in those days.

There were three triples in this game.  I'm sure that's nowhere near a record, but it's not exactly common, either.  I would think the Oakland Mausoleum would be conducive to triples, although I didn't look it up to check.

Record:  The Twins were 5-10, in seventh (last) place, five games behind the White Sox, 2.5 games behind sixth-place Kansas City.