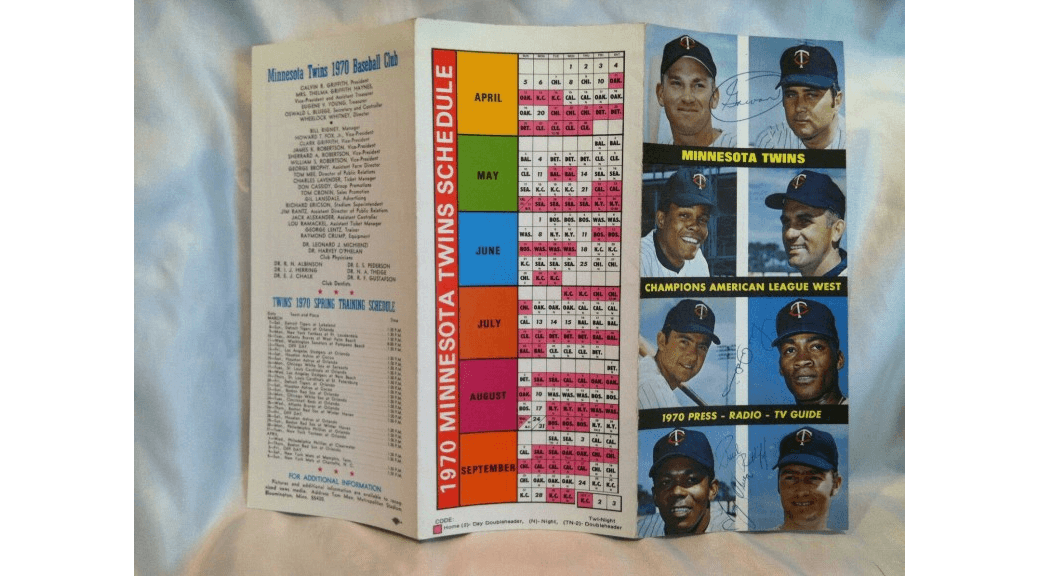 The game:  The Twins led early.  Tovar led off the first with a walk and Cardenas and Oliva singled, loading the bases.  Harmon Killebrew hit a two-run single, giving the Twins a 2-0 lead.  The Twins again loaded the bases in the third inning, this time with two out, on singles by Mitterwald and Tovar and a walk to Cardenas.  And this time it was Oliva delivering a two-run single, making it 4-0.  The Twins added one more in the third when Mitterwald drew a two-out walk, stole second, and scored on a Danny Thompson single, bringing the score to 5-0.

But the Royals came roaring back in the fifth.  Consecutive one-out singles by Oliver, Rojas, Floyd, Tommy Matchick, Sorrell, and Kelly resulted in five runs, tying the score at 5-5.

The Twins took the lead back in the fifth.  Killebrew walked, Holt singled, and a two-out double by Mitterwald made it 7-5.  In the fifth Bob Allison reached on an error and scored on a Cardenas single.  Oliva followed with a single, and another error brought home another run, making it 9-5 Twins.

It stayed 9-5 until the ninth, when Kansas City had another big inning.  Singles by Rojas, Floyd, Sorrell, and Jackie Hernandez made it 9-7 with one out and two on.  A ground out followed for the second out, but an error made it 9-8, Kirkpatrick's two-run double made it 10-9 Royals, and another error increased the Kansas City lead to 11-9.

This time it was the Twins' turn to come back.  In the bottom of the ninth Rich Reese walked and singles by Paul Ratliff, Cardenas, and Charlie Manuel tied the score and sent the game to extra innings.

Neither team scored in the tenth, but each team scored two in the eleventh.  In the top of the inning Eliseo Rodriguez walked, was bunted to second, and scored on a Lou Piniella single.  Piniella then stole second and scored on Kirkpatrick's single to give the Royals a 13-11 lead.  But in the bottom of the inning Cotton Nash walked, Tovar doubled, and Cardenas delivered another two-run single to tie it 13-13.

In the twelfth Floyd led off with a walk, Sorrell singled with one out, and pitcher Ted Abernathy hit a two-out single to put Kansas City back up 14-13.  This time the Twins could not come back.  Holt had a leadoff single but could advance no farther and the game was over.

Notes:  Holt was again in center field, with Tovar at third base, Killebrew on first, and Reese out of the lineup.  Thompson was at second in place of Rod Carew.

Al Fitzmorris was the starting pitcher, but he came out of the game without throwing a pitch.  Paul Splittorff replaced him.  I have to assume Fitzmorris either was ill or injured himself warming up--I see no reason this would be some sort of ploy in a meaningless game.

The Twins used eighteen position players and six pitchers in this game.  With the only slightly expanded September rosters now, we will never be able to see this again.

Record:  The Twins were 96-64, in first place in the American League West, eight games ahead of Oakland.