The game:  The Twins started the scoring in the second and did so in a big way.  Garver led off with a double and scored on Gonzalez' single.  A double play made it look like the scoring might end right there, but Arraez followed with a home run, Schoop and Buxton hit back-to-back doubles, Kepler singled, and Polanco hit a two-run homer.  It was 6-0 and the Twins lead would never be threatened.

The Twins kept the scoring going.  Buxton doubled with one out in the fourth and scored on a Kepler single.  In the fifth Gonzalez was hit by a pitch and scored on Schoop's two-out two-run homer.  It was 9-0 through six.

The Rangers tried to get back into the game in the seventh.  Martin Perez, who had cruised through six innings, walked Nomar Mazara to open the seventh.  Singles by Forsythe and Asdrubal Cabrera plated one run and Odor's RBI double made it 9-2.  Ryne Harper came in and allowed a run-scoring ground out, then with two down gave up a homer to Choo, making the score 9-5.

No problem.  Garver led off the bottom of the seventh with a home run.  Gonzalez singled, Cron doubled, and Schoop delivered a two-out two-run double to make it 12-5.  Forsythe homered in the eighth to cut the margin to 12-6, but the Twins added a few more in the bottom of the eighth. Miguel Sano singled, Garver walked, Gonzalez doubled home one and Cron doubled home two.  Texas went down in order in the ninth.

Notes:  Arraez was at third base in this game, with Gonzalez in left and Sano on the bench.  Sano entered the game as a pinch-hitter in the fourth, as Nelson Cruz left the game.  According to news reports, Cruz had discomfort in his foot because his shoe was too tight.  I don't know why he couldn't simply put on a bigger shoe, but it obviously didn't matter for the outcome of the game.

As noted above, Perez pitched very well for six innings.  In retrospect you can say he was left in the game too long, but his pitch count wasn't high and there were no obvious signs that he was tiring.  Sometimes a guy just loses it quickly.

Stewart pitched the last 1.1 innings.  It had been widely assumed that he was going to be Sunday's starter, but that seems very unlikely now.  Maybe that never was the plan, or maybe Rocco thought it was better to save the rest of the bullpen now and figure something else out for Sunday.  The pitcher who started in Rochester Tuesday, and so would be going on regular rest Sunday, was Devin Smeltzer.  He did pretty well in his two earlier major league starts, so it would not be surprising to see him back for the Sunday start.

The win guarantees that the Twins will go into the all-star break not having more than a two-game losing streak.  That's pretty remarkable.

Record:  The Twins are 55-32, first in the American League Central, 6.5 games ahead of Cleveland. 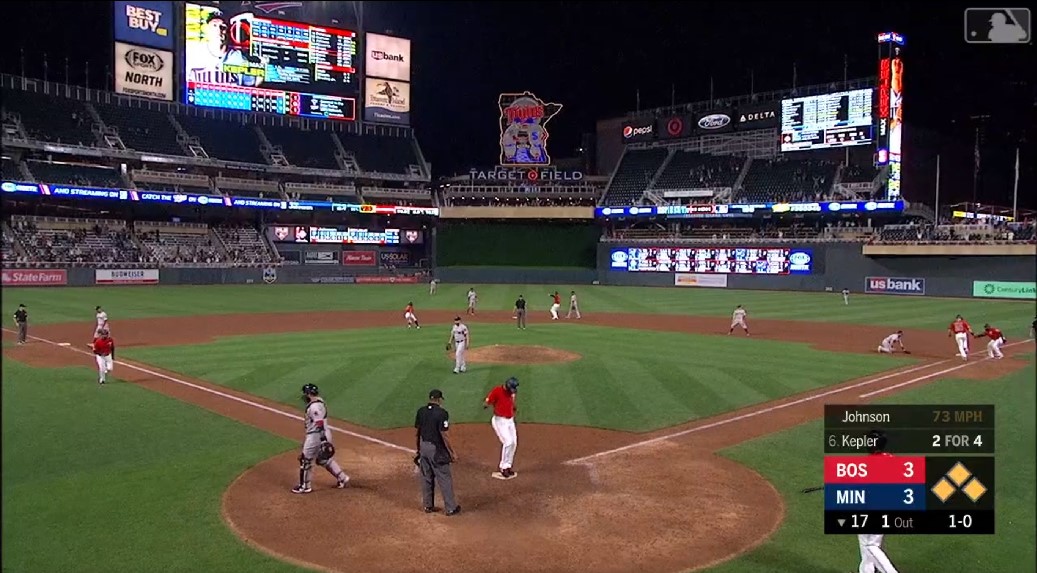 The Twins should have taken the lead in the sixth.  Mitch Garver led off with a double and Nelson Cruz singled him to third with none out.  But Garver was picked off third by the catcher and Rosario fouled out.  The Twins still had a chance, as Cron was hit by a pitch and Kepler walked to load the bases, but Miguel Sano fanned to end the inning.  The Red Sox immediately made them pay, as Devers led off the seventh with a home run to give Boston a 2-1 lead.

The Twins tied it up in the eighth.  Walks to Garver and Cron put men on first and second with two out and Kepler delivered an RBI single to make the score 2-2.  It stayed there for a while.  Boston threatened in the tenth and twelfth and the Twins also threatened in the twelfth, but there was no more scoring until the thirteenth, when Betts led off with a home run.  But Kepler led off with a home run in the bottom of the thirteenth to once again tie the score, and the teams played on.

The Red Sox again threatened in the fourteenth, getting leadoff singles from Holt and MIchael Chavis.  A bunt (!) moved them to second and third, but nothing came of it.  In the fifteenth Rosario led off with a double but was doubled off second on Cron's liner.  In the top of the seventeenth, Benintendi singled and got to third on a stolen base-plus-error with none out, but a strikeout and two ground outs ended the inning without a score.

Finally came the bottom of the seventeenth.  Luis Arraez had a one-out single and went to third on Rosario's double.  Cron was intentionally walked, and Kepler again came through with an RBI single to win the game for the Twins.

Notes:  Marwin Gonzalez was again in right field, with Kepler starting the game on the bench.  Jake Cave was in center field.

Garver was rightly criticized for getting picked off in the sixth.  I also wonder why he did not dive back into the base, rather than going in standing up.  But additionally, I wonder what the third base coach was doing.  With a shift on and the third baseman playing well off the bag, this was obviously a planned play.  It seems like the third base coach should be watching for that and make sure the runner is aware of it.  Instead, it appeared that he became a spectator.

Watching part of the game last night, it seems to me that several Twins batters (not just Sano) have gotten a little homer-happy.  Don't get me wrong, I have nothing against home runs and I'm not calling for a return of the piranhas.  But I saw several batters trying to jerk every pitch out of the park in situations where a single would've served us quite admirably.  This may be something that the batting coach needs to address.

Lost in the long game is the fact that Pineda had his second good start in a row.  Over those starts, he has pitched 11.2 innings and given up two runs on seven hits and three walks while striking out nine.  He only threw eighty pitches last night, so it seems like he could've gone a seventh inning.  Perhaps the Twins are still trying to be careful with him.  But he hasn't had a really bad game in a month and a half and his ERA has fallen steadily from a peak of 6.21 to 4.76.  I'm not nominating him for the Cy Young Award, but he's kept us in the game for eight starts in a row, and has done more than that in his last two.

The much maligned (and properly so) Twins bullpen pitched eleven innings and gave up just two runs.  Further, both the runs came on solo homers, and we all know those don't hurt you.  I won't be surprised if we bring up a "fresh arm for the bullpen", but only three of the eight relievers used threw more than eighteen pitches, so I assume most of them could pitch again tonight if needed.

Each team completely emptied its bullpen, using eight relief pitchers.  Presumably, once the last guy came in he was in for the duration, unless the game had gone twenty-four innings or something.  At that point, the teams would've had to decide whether to use a starting pitcher in relief or use a position player.  That would've been interesting, but I'm fine with winning in the seventeenth instead.

It should be noted, as I'm sure it was numerous times during the game, that the Twins still have not lost three games in a row this season.

Record:  The Twins are 48-24, first in the American League Central, ten games ahead of Cleveland.