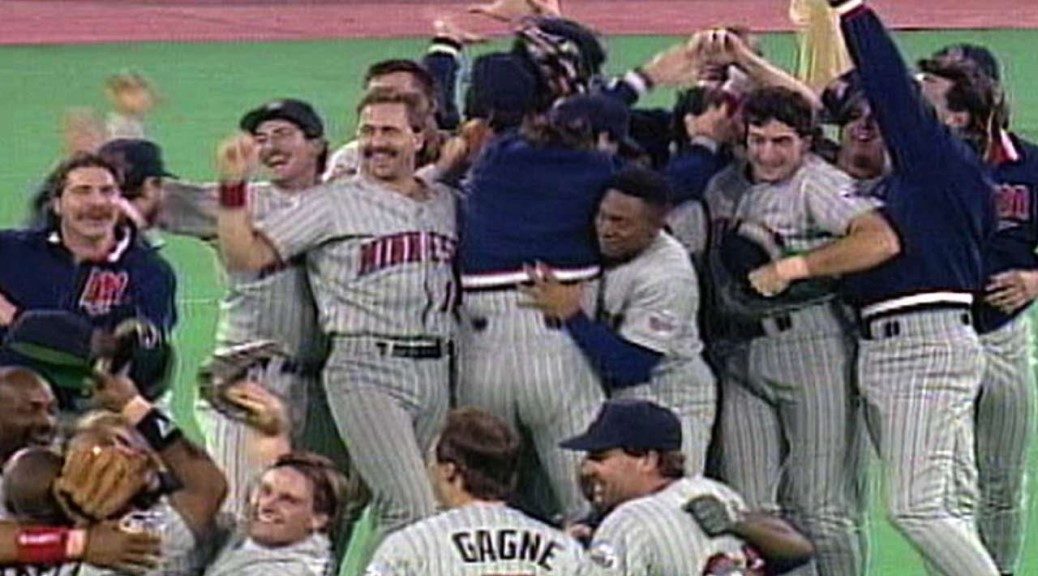 The game:  Puckett homered in the first inning to give the Twins a 1-0 lead.  In the second Chili Davis singled and went to second on a passed ball.  Brian Harper reached on a strikeout/passed ball, with Davis going to third.  Mack then delivered an RBI single to make it 2-0.  A bunt moved the runners to second and third with one out, but the Twins could do no more damage, keeping the score 2-0.

Toronto came alive in the third.  Lee led off with a single and White hit a one-out single.  Alomar singled to drive in a run, Joe Carter tied it with a ground-rule double, and a third run scored on a ground out, putting the Blue Jays up 3-2.  With two out in the fifth, Lee and Mookie Wilson singled and White walked, loading the bases.  Alomar then hit a two-run single to put Toronto ahead 5-2.

It was not looking good for the Twins, and when they left the bases loaded in the sixth it looked worse.  But they came back in the seventh.  Mack singled, stole second, and went to third on Pagliarulo's single.  With one out, Dan Gladden hit a grounder to third.  The Blue Jay could've had Mack out at the plate, but an error on catcher Pat Borders allowed him to score and left men on first and second.  Knoblauch then delivered a two-run double, tying the score 5-5.

With two on and nobody out in the eighth, Gladden singled and stole second.  Knoblauch walked.  Puckett singled to put the Twins ahead, an on a throw to the plate, the runners advanced to second and third.  That cost Toronto, because Kent Hrbek hit a two-run single to put the Twins up 8-5.  The Blue Jays did not advance a man past first after that, and the Twins advanced to the World Series.

Notes:  The Twins made just one non-pitching substitution.  Junior Ortiz went behind the plate in place of Harper in the ninth.

The Twins stole eight bases in the series, going 8-for-12.  Gladden had three, Knoblauch had two, Mack had two, and Davis had one.

There was nothing for the Twins to do now but wait to see who they would play in the World Series.  Pittsburgh and Atlanta were tied at two games apiece at this point.

Record:  The Twins won the best-of-seven series four games to one.