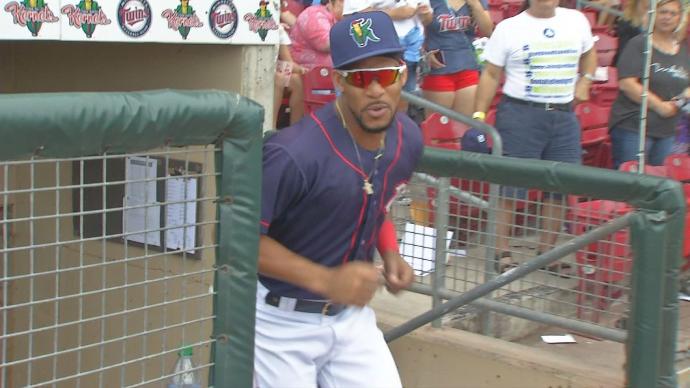 Byron Buxton begins his rehab.  The DSL season comes to a close.

The Chiefs took a 3-1 lead after three and never trailed.  Zander Weil was 2-for-4 with a double.  He is batting .253.  Brandon Barnes was 1-for-4 with a home run, his twenty-ninth.  He is batting .254.  Jorge Alcala struck out three in 1.2 scoreless innings, giving up one hit.  His ERA remains zero.  The Red Wings are 66-66, in fourth place, four games back.  Their elimination number is five.

An error scored two Generals in the fifth to break a scoreless tie.  LaMonte Wade, on a rehab assignment, was 2-for-4 with a double.  He is batting .267.  Alex Krilloff was 2-for-4.  He is batting .284.  Griffin Jax struck out seven in six innings, giving up three runs (one earned) on four hits and a walk.  His ERA is 2.67.  Andrew Vasquez pitched a scoreless inning, giving up a walk and striking out one.  His ERA is 4.91.  The Blue Wahoos are 34-28, in third place, four games back.  However, Biloxi, which won the first half, is in first place by 2.5 games in the second half.  If the Shuckers win both halves, the second playoff qualifier will be the team with the second-best overall record.  The Blue Wahoos have clinched that distinction, and will go to the playoffs is Biloxi holds its lead.  It would have been really interesting if Pensacola played Biloxi in the last week of the season, but they don't.

Rained out.  The game will not be made up.

The Kernels led 5-0 through eight, but the Chiefs scored nine runs in the ninth.  Tyler Webb was 2-for-3 with a triple, a walk, and two runs.  He is batting .241.  Spencer Steer was 2-for-4 with a double and a walk.  He is batting .255.  Wander Javier was 2-for-5 and is batting .176.  Byron Buxton, beginning his rehab assignment, was 1-for-2 with a double and a walk.  Josh Winder pitched six innings, giving up four hits and two walks and striking out five.  His ERA is 2.68.  Dylan Thomas pitched two shutout innings, giving up two hits and a walk and striking out one.  His ERA is 2.70.  The Kernels are 33-29, in fourth place, six games back.  Their elimination number is four; however, they qualified for the playoffs by finishing second in the first half.

Charles Reyes circled the bases on a double-plus-error with the bases loaded to give the Braves a 6-1 lead in the sixth.  The Twins had just three hits.  Andriu Marin pitched five innings, giving up two runs on four hits and two walks and striking out four.  His ERA is 5.92.  Benjamin Dum pitched a scoreless inning, giving up one hit and striking out one.  His ERA is 3.21.  The Twins are 31-33, in fourth place, two games back.  Their elimination number is two.

The Dominican Summer League season is over.  The DSL Twins finished 24-40, in seventh place, nineteen games back.

One thought on “Minor Details: Games of August 25”