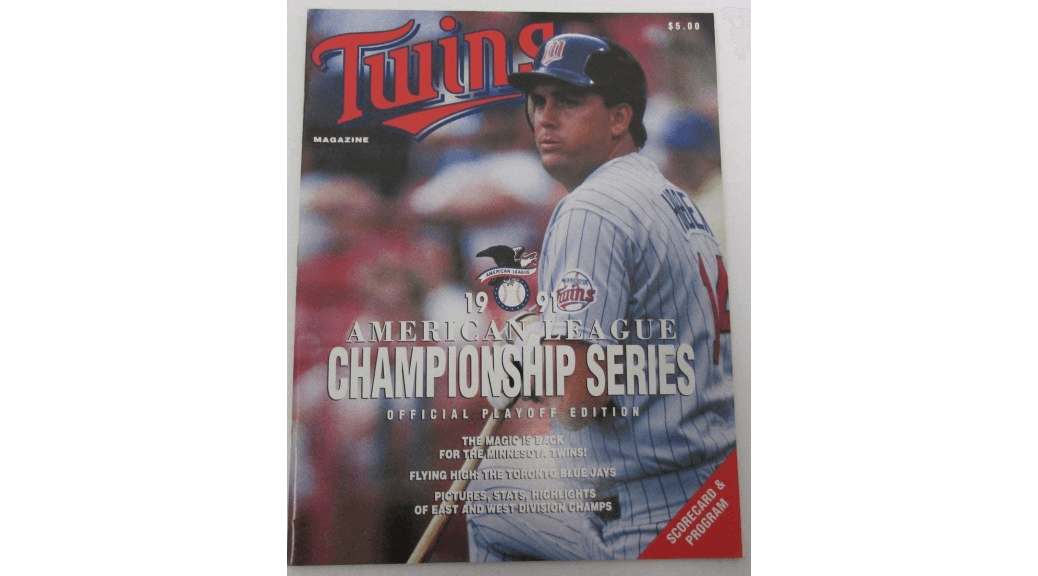 The game:  Gladden and Knoblauch started the first inning with singles.  A fly ball and a stolen base moved them to second and third with two out.  Davis then came through with a two-run single to put the Twins up 2-0.  Mack led off the second with a single, stole second, and scored on a Greg Gagne single.  Singles by Gladden and Knoblauch brought home Gagne to make it 4-0.  In the third Davis walked, stole second, and scored on Mack's double to put the Twins up 5-0.

The Blue Jays started their comeback in the fourth.  Alomar singled and Carter doubled, but Alomar was thrown out at the plate.  Carter went to third on the throw, however, and scored on a ground out to make it 5-1.

The Twins loaded the bases in the fifth but did not score.  In the sixth Toronto got five consecutive one-out singles, by Devon White, Alomar, Carter, Olerud, and Gruber, to cut the lead to 5-4.  The Blue Jays had men on first and second with one out, but at that point Jack Morris was replaced by Willis, who retired the next two batters to get the Twins out of the inning.  The Blue Jays had only one baserunner after that, a two-out single by Olerud in the eighth.  The Twins held on to take game one 5-4.

Notes:  Scott Leius pinch-hit for Mike Pagliarulo in the fifth inning and stayed in the game at third base.  Junior Ortiz came in to replace Brian Harper at catcher in the eighth.  Gene Larkin pinch-hit for Leius in the eighth, with Al Newman coming in to play third base in the ninth.

Morris pitched very well for four innings, got out of trouble in the fifth, but could not get out of the sixth.  Five consecutive singles sounds like bad luck, and maybe it was, but four of the five are described as line drives.  Willis really came in and saved the day, as he did so many times in the 1991 season.

I was a little surprised to see that the Blue Jays had gone with Candiotti as their game one starter.  Their other starters were Todd Stottlemyre, Jimmy Key, David Wells, and Juan Guzman.  But in 1991 Candiotti had a 2.65 ERA and a 1.16 WHIP.  He was really good that year, and you can see why Toronto started him in game one.

Both teams hit well with men in scoring position.  The Blue Jays were 3-for-8 and the Twins were 4-for-12.  Toronto stranded four men and the Twins stranded eight.

The Twins weren't a particularly strong basestealing team, but they stole four bases in this game.  They were 4-for-6.  Candiotti, a knuckleballer, being on the mound probably influenced that.