I just came across and ordered a cool, cheap ABBA shirt yesterday.

Your calls for an encore have been heard and granted. More Finnish Metal! This is another one that makes me grin when it comes through my earbuds. I wouldn't for a moment want anybody to know what in the hell I'm listening to, but more silly metal fun for me.

As an added bonus, while looking for a video (tough call by the way...Official Turisas video is kind of obnoxious, but better audio than the live performance versions), I happened to learn that the original performer was Boney M, below. It’s worth watching for the choreography, if nothing else:

Who is Boney M, you ask? (I would love to know if anybody has heard of them.) A collection of Carribean disco-pop performers based our of West Germany. Why not? The song made to number 1 on a handful of European charts. Charts of what? Couldn't tell you. The fact that this was originally a disco song does answer a few questions I had about what lyrics the Finns were trying to sing.

Even better, Boney M was founded by Frank Farian, who (co) wrote and produced the song.

Farian...why does that name ring a bell? I mean, it didn't, but while trying to figure out what the heck Boney M was, I found out he was the mastermind behind the Milli Vanilli fiasco. I guess having fronts for his music was kind of his thing. He may have been singing the Boney M track above.

As best I can tell, this song hasn't ever been played 'round these parts, and it feels like an appropriate way to close out my guest DJ week.

In all seriousness, thanks to everyone for voting and commenting and just generally making this week far more fun than I ever expected. 😘

Book pairing: Weather Words and What They Mean by Gail Gibbons 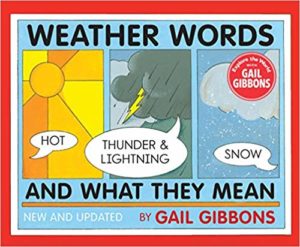 I'm entirely into these guys thanks to Zack.

These guys have a new album out. Reviews are... mixed.