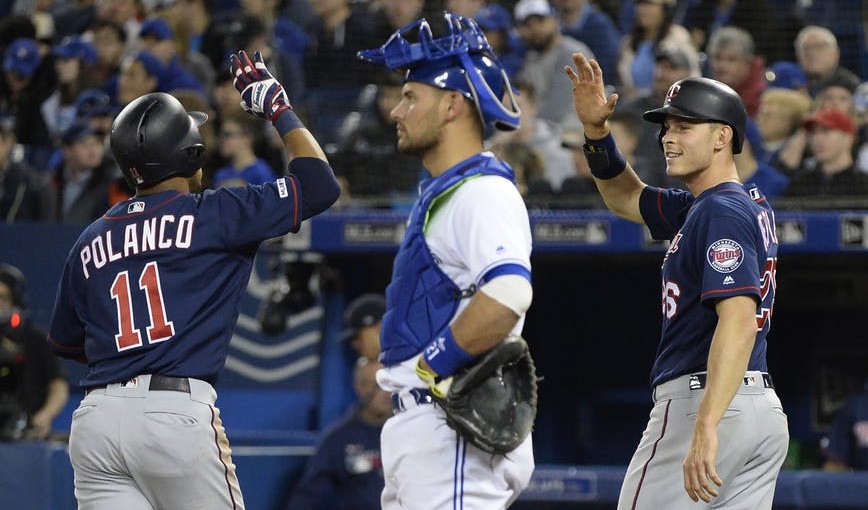 Opposition stars:  Billy McKinney was 1-for-3 with a home run, his second.  Derek Law struck out four in two shutout innings, giving up one hit.

The game:  The Twins threatened to take a big lead in the first inning.  Singles by Kepler and Polanco put men on first and third with none out.  A popup and an Eddie Rosario sacrifice fly put them up 1-0.  Cron singled and Marwin Gonzalez walked to load the bases, but Mitch Garver popped up, leaving the score 1-0.

Other than the home run, the only time the Blue Jays got a man as far as second was the ninth, on a walk and a fielder's choice.  It was total dominance by Gibson and three relief pitchers.

As you probably heard, Polanco is the first Twin to have more than one five-hit game in a season since Joe Mauer in 2010.

Four two-run homers in one game is probably not the record, but it would seem like it has to be at least within shouting distance of it.

Going into the Houston series a week and a half ago, I said that after the next ten games we'd have a better idea of how good the Twins are.  Well, they went 7-3 in those ten games.  Two of the losses were games started by Michael Pineda, and at that only one of them was a blowout--in the other, the Twins just ran into a really good pitcher they couldn't do much with, which happens to everybody sometimes.  It seems to me that we have to say this is a good baseball team.

That's not to say they're going to win the World Series.  I do think they're now the favorites to win the division, though.  They might not do it--it's a long season, and lots of things can happen (injuries, slumps, etc.).  But it's looking good now.  That's why I hope the front office is not willing to settle for just winning the division, and is looking for ways to improve the team so it can actually go somewhere in the playoffs.  Again, I say that not knowing what deals may be available to them.  I'm not advocating a move of the Ramos-for-Capps variety.  But I think they have a real chance this year, and you never know for sure how many of them you're going to get.  When you get one, I think you need to go for it.

Record:  The Twins are 23-12, first in the American League Central, four games ahead of Cleveland.