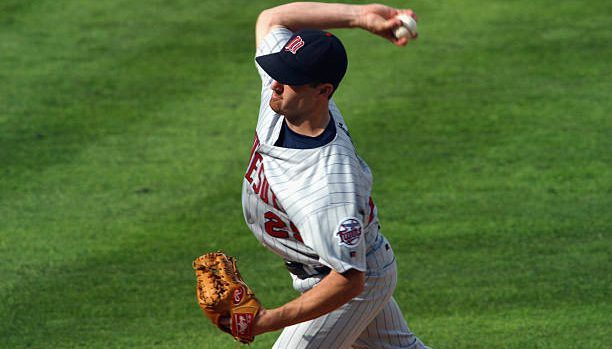 The game:  The first was a "Twins Baseball!" kind of inning.  Guzman led off with a walk and went to third on a single by Jay Canizaro.  A one-out sacrifice fly by Ron Coomer got the Twins on the board.  A wild pitch moved Canizaro to second, Corey Koskie walked, and Butch Huskey was hit by a pitch, loading the bases.  Jones then delivered a single, only the second hit of the inning, to put the Twins up 3-0.

The Tigers threatened in the third.  Cruz singled, and with two out Brad Ausmus and Juan Encarnacion walked, loading the bases.  But Juan Gonzalez flied out to end the inning.  The Twins added a run in the fourth when Guzman led off with a triple and scored on a Matt Lawton single.

That was it for the scoring.  Detroit had a chance to at least spoil the shutout when Encarnacion led off with a triple.  But Gonzalez hit a short fly ball, Bobby Higginson fouled to the catcher, and Dean Palmer flied out to end the game.

Huskey was the DH.  He had signed with the Twins to be the DH, but at this point he was close to losing the job to David Ortiz.  Huskey batted just .223 with an OPS of .660 before being traded to Colorado in mid-July.

On the other end, Canizaro was batting .185, although he would finish at .269.  The Twins had soured on Todd Walker at this point and would trade him to Colorado in the same deal that sent Huskey there.  Walker had batted .316 in 1998 and a still-respectable .279 in 1999, but when he got off to a slow start in 2000 the Twins benched him, sent him to AAA, and then traded him.  His defense was suspect, but as I recall this was a case where the main reason for trading him was that Tom Kelly just didn't like him.  Walker went on to have a very good major league career while the player the Twins got back in the deal, Todd Sears, played just forty major league games.  And it's not like the Twins had a hotshot second baseman knocking at the door to replace him--Canizaro was the regular for 2000 and they then went to Luis Rivas.  I think a lot of TK, but he had his blind spots, and this was one of them.

The Twins batted .270, which was tied for tenth in the league.  Cleveland and Kansas City led at .288.

Jones led the team in homers with 19.  Coomer had 16, Lawton 13, and Ortiz 10.  They finished dead last in home runs with 116, thirty-four behind the next lowest team.  Toronto led the league with 240.  When the juiced ball era came around, the Twins were conscientious objectors.

The bullpen was better than that, but it wasn't particularly good either.  The Twins posted an ERA of 5.14, tied for eleventh in the league.  Toronto led at 4.23.  The Twins were actually eighth in WHIP at 1.50.  Boston led at 1.33.  It was definitely a hitters' year.

This was the year Guzman hit twenty triples.  He led the league, of course, one of three times he did so.

The was the second game of a stretch in which the Twins won five out of six.  They did not have very many of those stretches in 2000.

Random Record:  The Twins are 46-44 in Random Rewind games.