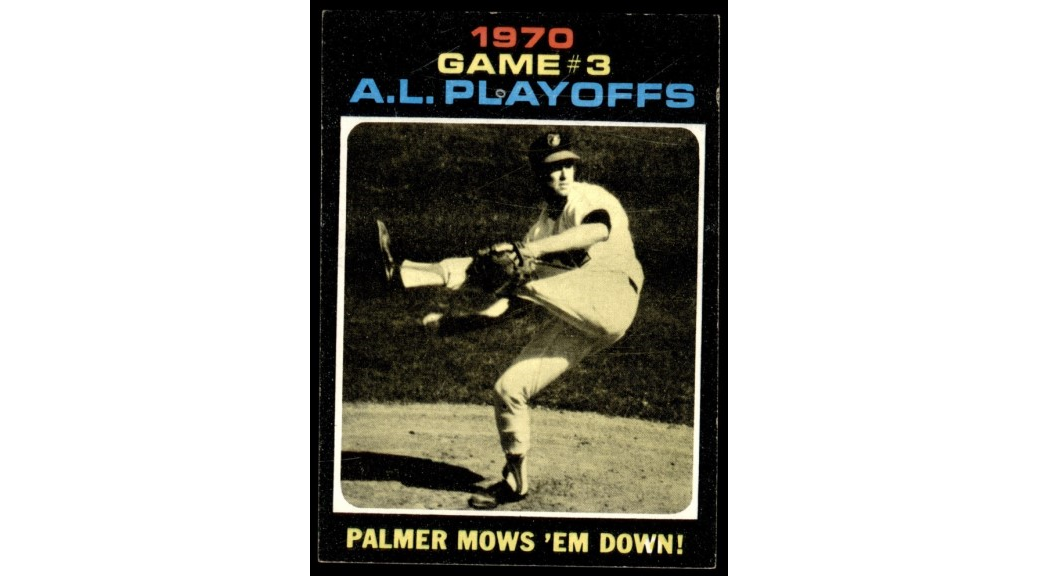 Opposition stars:  Brooks Robinson was 3-for-4 with a double.  Dave Johnson was 2-for-3 with a home run (his second), a walk, and two runs.  Don Buford was 2-for-4 with two RBIs.  Jim Palmer struck out twelve in a complete game, giving up one run on seven hits and three walks.

The game:  The Orioles took the lead in the first inning, as Buford singled, was bunted to second, and scored on Boog Powell's single.  In the second, Palmer reached on a two-base error and scored on Buford's single, making it 2-0.  In the third Robinson doubled and went to third on Johnson's single.  An error brought home a run, a force out put men on first and third, Palmer hit an RBI double, and a sacrifice fly made the score 5-0.

The Twins put two on with none out in the fourth but did not score.  They got on the board in the fifth when Tovar hit a two-out triple and scored on a Leo Cardenas single.  But they only got two baserunners after that, and did not get a man past first base.  The Orioles added a run in the seventh on Johnson's homer.  They won they game 6-1 and took the series 3-0.

Notes:  Jim Holt was in center field, with Tovar moving to left and Brant Alyea out of the lineup.  Paul Ratliff was behind the plate in place of George Mitterwald.  Danny Thompson was at second base in place of Rod Carew.

This was the first playoff appearance for Blyleven.  He would not appear in another playoff game until 1979 with Pittsburgh.

The pinch-hit appearance by Allison was the last at-bat of his career.

Oriole pitchers went 5-for-13 with a grand slam, two doubles, four runs, and six RBIs.  None of their pitchers were particularly good batters--the highest batting average on the staff was by Tom Phoebus, who did not pitch in this series, and his average was a mere .163.  The best OPS among Oriole pitchers (not counting Dave Leonhard's 1-for-2) was .461 by McNally.  They had no one else over .350.

Oriole pitchers were just too much for the Twins in this series.  They scored only ten runs, and six of them came in the first five innings of the first game.

So another quick, frustrating exit for the Twins.  But it was still a fun season, and I still remember it fondly.  I hope you do, too, and I hope this was a fun series for anyone who was reading it.  We'll put up a couple of season wrap-up posts before the series ends.  And, God willing, we'll pick another season to rewind next off-season.