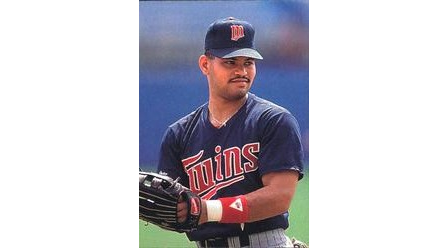 Batting stars:  Pedro Munoz was 3-for-4 with two home runs (his eleventh and twelfth) and all five RBIs.  Brian Harper was 3-for-4.  Dave Winfield was 2-for-4 with a double and two runs.  Jeff Reboulet was 2-for-4.

Opposition stars:  Danny Tartabull was 2-for-3 with a walk and a hit-by-pitch.  Bobby Munoz pitched 2.1 scoreless innings, giving up one hit and striking out two.

The game:  Dion James hit a one-out double in the first, went to third on a ground ball, and scored on a wild pitch to give the Yankees a 1-0 lead.  It stayed 1-0 until the fourth.  With one out, Winfield and Harper singled and Munoz hit a three-run homer, putting the Twins in front 3-1.

The Yankees got one back in the bottom of the fourth when Mike Stanley walked, Bernie Williams singled, and Wade Boggs reached on an error.  It stayed 3-2 until the sixth, when Winfield doubled and Munoz delivered a two-out two-run homer to make it 5-2 Minnesota.

It couldn't come easy, of course.  New York cut the margin to 5-3 in the bottom of the sixth when Mike Gallego doubled and scored on a Jim Leyritz single.  It stayed 5-3 until the ninth.  Rick Aguilera retired the first two Yankees, but Tartabull singled, Matt Nokes singled, and Stanley hit an RBI single, cutting the margin to 5-4 with Williams coming up to bat.  But Williams grounded out to first, and the game was over.

David McCarty was in right field.  Kirby Puckett played the most games in right, 47 (compared to 95 in center).  Munoz played 41, McCarty 34, and Winfield 31.  Munoz was in left in this game, a place he played 64 games (tied with Shane Mack.  Mack played 67 games in center).

In winning this game, the Twins used probably their best starter (Banks) and their three best relievers (Casian, Willis, and Aguilera).  And they did manage to beat the Yankees, even if just barely.

This was the first game of a stretch in which the Twins would win eight out of nine.

Random record:  The Twins are 55-49 in Random Rewind games.