Ray Ryan was involved in minor league baseball for six decades.  He had one baseball card, a part of the T206 tobacco series.  This is the series that produced the famous Honus Wagner card.

END_OF_DOCUMENT_TOKEN_TO_BE_REPLACED 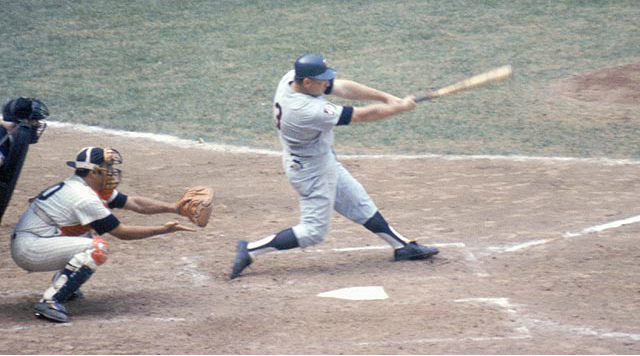 Pitching star:  Stan Williams was perfect over 3.1 innings, retiring all ten men he faced.  He struck out one.

Opposition stars:  Duane Josephson was 2-for-4 with a triple.  Ken Berry was 1-for-3 with a walk.

The game:  The Twins took control early.  They got on the board in the second inning.  Killebrew walked, Rich Reese singled, and Paul Ratliff was hit by a pitch, loading the bases with none out.  They only scored once, on Cardenas' sacrifice fly, but the broke it open in the third.  Cesar Tovar and Holt singled, putting men on first and third with none out.  Oliva had an RBI single, a run scored on a wild pitch, and Killebrew had an RBI single.  A force out and a Ratliff single put men on first and second with one down.  Cardenas had an RBI single, and a sacrifice fly followed.  It was 6-0 Twins and it was never close again.

The Twins added some more in the fifth.  Killebrew led off with a home run.  Reese and Ratliff walked and Danny Thompson had an RBI single.  Cesar Tovar was hit by a pitch, loading the bases, and Holt delivered a two-run single to put the Twins up 10-0.

The White Sox got all of their runs in the sixth.  With one out, Walt Williams walked and Luis Aparicio doubled.  Tom McCraw drove in a run with a double, a ground out brought home a second run, and Josephson tripled in a third run, cutting the Twins' margin to 10-3.  Chicago did not get a baserunner after that, however.

The Twins added single runs in the sixth and seventh.  In the sixth Ratliff was again hit by a pitch and scored on scored on Cardenas' double.  In the seventh Tovar reached on an error, Oliva singled, and Killebrew was intentionally walked, loading the bases with two out.  Reese was then hit by a pitch (the fourth hit batsman of the game) to force in the game's final run.

Notes:  Ratliff was behind the plate in place of George Mitterwald.

Holt was in left in place of Brant Alyea.  That's kind of misleading, though, because while Alyea is listed as the regular, Holt actually played a few more games in left (76 to 73).  I assume the left-handed batting Holt was somewhat platooned with the right-handed Alyea.

Thompson was the regular second baseman because Rod Carew missed much of the season due to injury.

This was the only triple of the season for Duane Josephson.  Remarkably, he hit six of them in 1968, half his career total.  That was his only year as a regular, and he made the all-star team.  I don't know how many people made he all-star team in their only year as a regular player, but I suspect the list is not very long.  He missed much of the 1969 season due to a blood clot, had to share catching chores with Ed Herrmann in 1970, and was traded to the Red Sox in spring training in 1971.  Injuries limited his playing time that season, and then some guy named Fisk came along.  Josephson was a backup in 1972, then his playing career was over.

The Bob Miller who started for the White Sox was, indeed, the Bob Miller who had pitched for the Twins in 1968-1969.  He was traded to Cleveland over the off-season in a deal that got the Twins Williams and Luis Tiant, but cost them Graig Nettles.  The Indians then shipped him on to Chicago in June.

Ray Ryan was involved in minor league baseball for six decades.  He had one baseball card, a part of the T206 tobacco series.  This is the series that produced the famous Honus Wagner card.