Jimmy Newberry was the first black player in Japanese baseball.

We would also like to wish a happy birthday to SBG’s brother.

END_OF_DOCUMENT_TOKEN_TO_BE_REPLACED

Jimmy Newberry was the first black player in Japanese baseball.

We would also like to wish a happy birthday to SBG’s uncle and to his brother.

END_OF_DOCUMENT_TOKEN_TO_BE_REPLACED 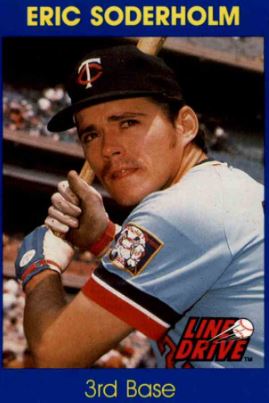 Batting stars:  Ron Clark was 2-for-3 with a walk.  Graig Nettles was 2-for-4 with two home runs, his second and third.

Opposition stars:  Pat Dobson pitched a complete game, giving up two runs on six hits and three walks and striking out four.  Mickey Stanley was 3-for-5.  Don Wert was 1-for-4 with a home run, his twelfth.

Detroit got on the board in the fifth when Wert led off the inning with a home run.  Again, however, they missed a chance to get more, as they loaded the bases with two out and could not add to their lead.  It cost them, because in the next half-inning Nettles hit a two-out home run to tie it 1-1.

The Tigers got a man to second with two out in the seventh, and the Twins did the same in the eighth, but the score remained tied until the ninth, when Nettles led off the inning with a home run to give the Twins their first lead of the game at 2-1.  The Tigers got a one-out walk in the bottom of the ninth, but did not advance the man past first base.

Notes:  Bruce Look was behind the plate in place of Johnny Roseboro.  This was Look's only season in the majors.  He batted .246 with an OBP of .353, pretty good numbers for 1968.  Granted, it was 139 plate appearances, but still, you'd think he might have gotten another chance.  Instead, he went to AAA Denver in 1969, batted .223, and played just two more season, both in AAA, before his career came to an end.

Rich Reese was at first base in place of Harmon Killebrew.  This, or course, was the year Killebrew was injured in the all-star game.  He came back in September but was mostly used as a pinch-hitter, never playing a full game the rest of the season.

Frank Quilici was at second base in place of Rod Carew, who missed a few games.  Clark was at shortstop.  Jackie Hernandez played the most games at short in 1968 with 79, but Clark was second with 44.  Rich Rollins was at third base.  Cesar Tovar played the most games at third in 1968 with 77, but Rollins was second at with 56.  Tovar was in center field in place of Ted Uhlaender, who missed a couple of weeks.  Nettles was in right field in place of Tony Oliva, whose season ended on August 31.

To sum up, of the eight regular listed by b-r.com, the only one to start the game at his regular position was left fielder Bob Allison.