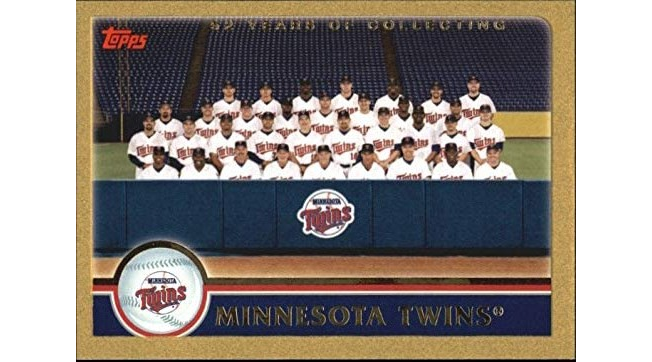 Batting stars:  Dan Gladden was 3-for-5 with a stolen base (his eighth) and two runs.  Randy Bush was 2-for-4 with two doubles and two RBIs.

Pitching stars:  Kevin Tapani pitched 8.2 innings, giving up four runs on eight hits and no walks and striking out six.  He threw 125 pitches.

It wasn't the end of the game, of course.  The Angels got a run in the first on two singles and a double play.  Gaetti homered leading off the second to make it 5-2.  It stayed 5-2 until the sixth, when Winfield homered to cut the margin to 5-3.

The Twins had done very little of offense since the first.  In the seventh, however, Greg Gagne reached on an error, stole second, and scored on Gladden's single.  Gladden then stole second and scored on a two-out double by Davis to put the Twins' lead back up to four runs at 7-3.

California did not give up.  Dave Parker hit a one-out double in the ninth.  With two out Lance Parris doubled to make it 7-4.  Rick Aguilera then came in to retire Dave Gallagher on a line out to end the game.

Notes:  Kirby Puckett got a rare day off.  Shane Mack was in center, with Bush in right.

On the other hand, Aguilera threw one pitch.

Grahe, the Angels' starter, pitched seven innings.  He allowed seven runs (five earned) on eight hits and two walks and struck out one.  It should be noted that he pitched very well after the first inning.  He had done very little up to this point in his career, but he would go on to have two pretty good years (1992-1993) pitching out of the California bullpen.  He had 21 saves for the Angels in 1992, when he was filling in for Bryan Harvey.  He battled injuries starting in 1994 and was out of baseball for three years.  He came back to pitch in thirteen games for Philadelphia in 1998 before ending his career.

The White Sox were idle, so the Twins gained a half game.

Record:  The Twins were 64-43, in first place in the American League West, 3.5 games ahead of Chicago.