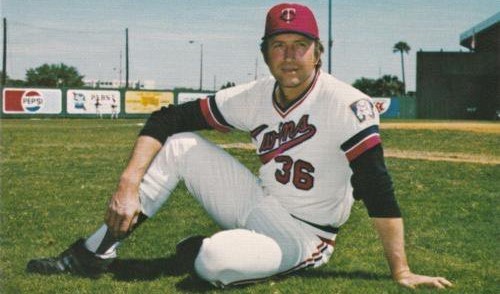 Batting stars:  Butch Wynegar was 2-for-4 with a home run, his seventh.  Ken Landreaux was 1-for-4 with a two-run homer, his fifteenth.

Opposition stars:  Moose Haas pitched a complete game, giving up three runs on six hits and two walks and striking out five.  Ben Oglivie was 4-for-4.  Robin Yount was 2-for-3 with a walk.  Gorman Thomas was 1-for-3 with a home run (his forty-third) and a walk.

There was really not much for threats from there until the seventh, when Oglivie hit a one-out single, Yount walked, and Charlie Moore delivered a two-out RBI single.  Milwaukee left men on first and third, but they still led 2-0, and that remained the score through eight.

Then came the ninth.  Roy Smalley led off with a walk.  A popup followed, but then Landreaux hit a two-run homer to tie the score.  Wynegar followed with a home run and the Twins took their only lead of the game at 3-2.

The Brewers did not give up.  Oglivie led off the ninth with a single, which brought Marshall into the game.  With one out Yount singled, putting men on first and second.  Moore hit into a force out at second, moving the tying run to third, but Paul Molitor popped up and the game belonged to the Twins.

Notes:  Rick Sofield was in center, with Landreaux moving to left.  Sofield had started the season with the Twins, but was sent to AAA in mid-May and came back as a September call-up.  Landreaux had played center most of the season.  Bombo Rivera is listed as the Twins' left fielder, but in fact they used a few players there:  Rivera (61 games), Landreaux (49), Glenn Adams (45), and Dave Edwards (36).

Smalley led the team in home runs with 24.  Landreaux had 15 and Ron Jackson 14.  No one else had double digits in homers.

Koosman would go on to win twenty games for the second and last time of his career.  He finished 20-13, 3.38, 1.33 WHIP at age thirty-six.  This was his first season with the Twins, having been traded from the Mets with Greg Field for Jesse Orosco.

The Twins had three decent starters in Koosman, Geoff Zahn, and Dave Goltz.  They struggled to fill out the rotation, however, with Paul Hartzell and Roger Erickson each posting an ERA over five in more than twenty starts.

Robin Yount was batting eighth for Milwaukee.  He was in his sixth major league season, but was still just twenty-three.  He batted .267 in 1979, but with an OPS of just .679.  The next season he would really become Robin Yount, batting .293 with 23 homers, leading the league with 49 doubles, posting an OPS of .840, and making his first all-star team.  Surprisingly, Yount only made the all-star team three times in his career and did not make it in one of his two MVP seasons, 1989.

They don't give pitch counts for games in the '70s, but these days Haas would probably not have started the ninth, and almost certainly would have been removed after the leadoff walk to Smalley.  The Brewers really didn't have a closer, and in fact had only twenty-three team saves, distributed over five pitchers.  They threw sixty-one complete games.  Presumably, George Bamberger saw no reason to take a pitcher out when he was doing well, regardless of what his pitch count was.

The Twins were still in the pennant race at this point, but after winning the next game they would drop six in a row to take them out of it.