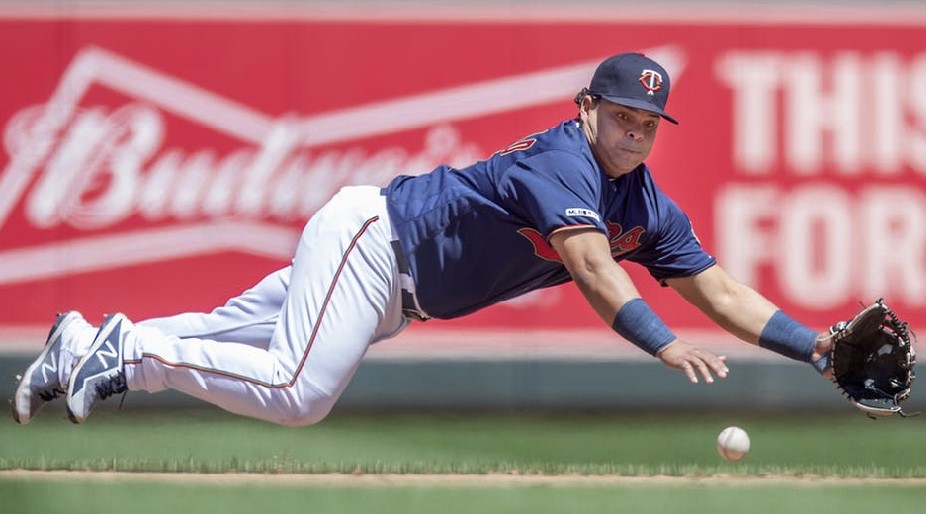 The game:  The Angels threatened in the first two innings but did not score.  They started the game with a walk and a single, but a line out and a double play ended the threat.  Goodwin had a leadoff double in the second, but nothing came of that, either.  The Twins got on the board in the bottom of the second.  C. J. Cron reached on a strikeout/wild pitch, Schoop had an infield single, and Adrianza hit a two-run double to give the Twins a 2-0 lead.

The Angels immediately cut it to 2-1 in the third on La Stella's home run.  It then stayed 2-1 until the fifth, when the Twins had a big inning.  Castro walked and Buxton hit a two-run homer to make it 4-1.  With one out, Polanco tripled and scored on Eddie Rosario's double.  A wild pitch moved Rosario to third and a Willians Astudillo sacrifice fly scored him to give the Twins a 6-1 advantage.

The Angels again immediately cut it to 6-3 in the sixth when Goodwin singled and Lucroy homered.  The Twins got the two runs back in the bottom of the sixth when Adrianza singled and Castro homered.  It was 8-3 through six and it looked like it should be an easy Twins win.  Los Angeles got one in the seventh on two singles and a sacrifice fly, but it was still a comfortable 8-4 lead going to the ninth.

It got uncomfortable in a hurry.  Trevor Hildenberger started the inning and got the first out, but then gave up doubles to Goodwin and Lucroy and a single to Fletcher, making the score 8-6.  Mike Morin came in and gave up a single to Walsh.  He struck out Luis Rengifo, but La Stella singled to load the bases and Mike Trout was hit by a pitch to force in a run, cutting the margin to 8-7 and bringing up Shohei Otani.  Otani, however, grounded to short and the Twins escaped with a victory.

Notes:  With Nelson Cruz still out, Polanco was the DH and Adrianza was at short.  Willians Astudillo was at third, with Marwin Gonzalez given the day off.  It seems odd to give Gonzalez a day off with Miguel Sano presumably returning to third base soon, but then I don't know just what Rocco Baldelli might have in mind over the next few games.

Polanco raised his average to .331.

Odorizzi did not have one of his best games, especially compared to the way he's been pitching recently.  He was constantly in trouble and finally, in the sixth, couldn't get out of it.  On the other hand, it wasn't reasonable to think he would keep pitching as well as he had been, and he got through 5.1 innings keeping the Twins in the game.  It's not what you want, but if that's as bad as it gets he'll be in good shape.  His ERA is now 2.63.

My first thought for the ninth was that Rocco should've left Parker in.  But Parker had pitched 1.1 innings the night before, and the Twins had a four run lead.  If you can't trust Hildenberger for one inning with a four run lead there's no point in having him on the team.  As it turned out, unfortunately, you can't and there's not, at least not right now.  Hildenberger is kind of a puzzle.  He has stretches where he seems unhittable, and he has other stretchers where he seems to be throwing batting practice.  I wonder if there's some sort of flaw in his delivery that he slips into sometimes and has a hard time getting out of again.  That's just speculation, of course.  But I can't blame the Twins for wanting him to go to Rochester until he gets straightened out.

It was asked if the Twins didn't have someone in Rochester better to bring up than Austin Adams.  The answer, in my opinion, is no, they really don't.  Kohl Stewart, maybe, but I suspect the Twins want him to continue starting.  Devin Smeltzer has made two really good starts for the Red Wings, but it's only two starts, so I suspect a) they want him to get more experience before bringing him up and b) they want him to continue starting as well.  Adams appears to be a replacement-level pitcher at best.  He will presumably try to fill the Fernando Romero groundskeeper role, but I'm not sure I wouldn't rather have another position player on the team instead.

Record:  The Twins are 27-15, first in the American League Central, 4.5 games ahead of Cleveland.