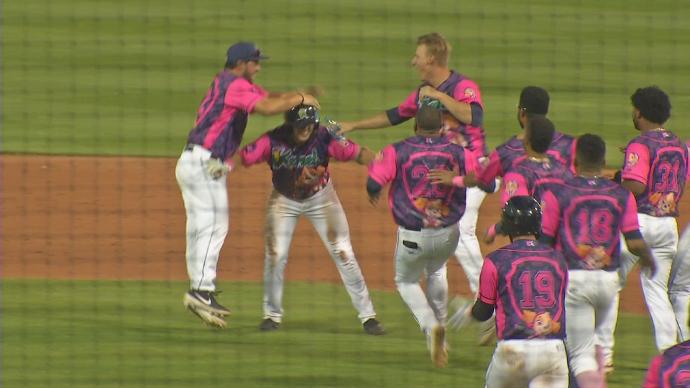 A big comeback for Quad Cities.

Damek Tomscha led off the bottom of the ninth with a game-ending homer.  Alex Kirilloff was 3-for-4 with a triple.  Jorge Alcala struck out seven in six shutout innings, giving up four hits and a walk.  Jeff Ames struck out two in two innings, giving up an unearned run on two hits and a walk.  The Blue Wahoos are 9-10, tied for third, one game back.

Already leading 3-1, the Tortugas scored three in the seventh.  Gabriel Maciel was 1-for-3 with a home run (his second) and a walk.  He is batting .344.  Cole Sands pitched six innings, giving up three runs on six hits and a walk and striking out five.  Derek Molina pitched a scoreless inning, giving up one hit, and has an ERA of 0.90.  The Miracle is 9-12, in fifth place, 6.5 games back.

The Kernels scored four in the ninth to overcome a 5-2 deficit, with Tyler Webb's two-run single bringing home the deciding run.  Gilberto Celestino was 2-for-4 with a walk.  Tanner Howell pitched a scoreless inning, giving up two hits.  J. T. Perez struck out two in a perfect inning.  Jose Martinez pitched a perfect inning and struck out one.  The Kernels are 12-6 and in a three-way tie for first.

Liam Sabino singled home the deciding run in the ninth.  Matt Wallner was 2-for-4 with a double and is batting .308.  Ruben Santana was 2-for-4.  Ryley Widell struck out seven in 4.1 innings, giving up two runs (one earned) on four hits and three walks.  Steven Cruz pitched 1.2 scoreless innings, giving up two walks and striking out one.  The Twins are 11-9, tied for second, a half game back.

The Pirates scored two in the sixth to break a 1-1 tie.  Wander Valdez was 2-for-3 and is batting .308.   Francisco Martinez was 1-for-2 with a home run (his second) and a walk.  Bailey Ober struck out eight in five innings, giving up an unearned run on two hits and a walk.  His ERA remains zero.  The Twins are 5-7, in fifth place, 4.5 games back.

The Orioles2 scored three in the seventh to break a 5-5 tie.  Misael Urbina was 3-for-4 with two RBIs and is batting .303.  Yelinson Pena was 2-for-4.  Yeremi Garcia pitched two shutout innings, giving up one hit and striking out one.  The Twins are 9-20, in eighth place, eleven games back.