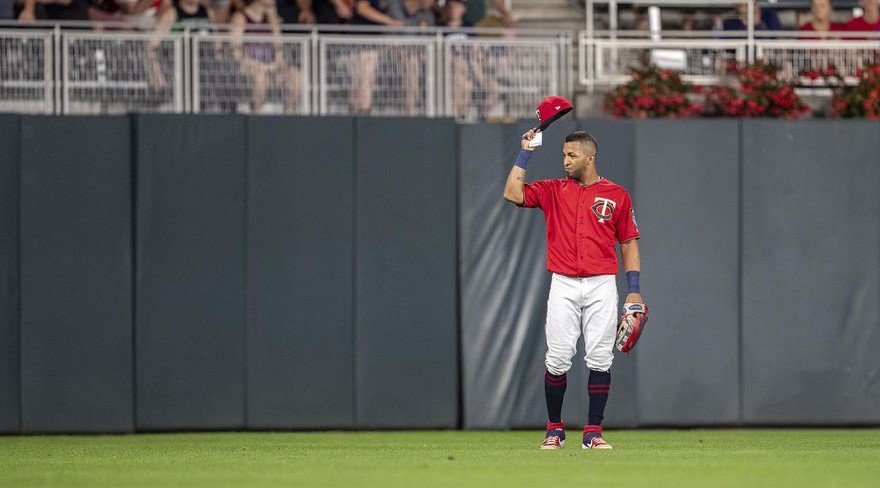 Opposition stars:  Ramon Laureano was 3-for-4 with two runs.  Jurickson Profar was 1-for-4 with a two-run homer, his fourteenth.  Mike Fiers pitched 6.1 innings, giving up three runs on six hits and four walks and striking out four.

The game:  The Athletics put men on first and third with two out in the second, but there was no score until the third, when Sano walked, went to second on a Jake Cave single, took third on a bunt, and scored on a wild pitch.  Oakland immediately tied it in the fourth, as Laureano singled, went to second on a wild pitch, and scored on a Khris Davis double.

The Twins missed a chance in the fifth, putting men on first and second with none out and running themselves out of the inning.  It looked like it would be costly, as the Athletics took the lead in the sixth.  Laureano singled with one out and Profar hit a two-out two-run homer, putting Oakland up 3-1.  But in the seventh, Arraez hit a one-out double, Sano walked, and Rosario, pinch-hitting for Cave, hit a three-run homer to give the Twins a 4-3 lead.

Oakland got a pair of one-out singles in the eighth, but a strikeout and a fly out ended the inning.  The Twins then got some insurance, as Garver and Cron each homered to make it 6-3.  The Athletics went down in order in the ninth.

Notes:  Max Kepler was in center field and Cave in right, with Byron Buxton still out.  Marwin Gonzalez was in left, replacing Rosario.  When Rosario entered the game, he went to left, with Gonzalez in right.  Arraez was at second base with Jonathan Schoop still out.  Ehire Adrianza was at shortstop, replacing Jorge Polanco.

The Twins made two more errors, although this time none of them led to runs.  Everyone keeps saying, "Well, Buxton's out", but Buxton isn't going to stop infielders from booting grounders or throwing the ball away.  Anyone who says, "Defense doesn't go into a slump" hasn't been watching the Twins lately.

But, all's well that ends well.  Gibson pitched a good game--not dominating, but seven innings, three runs, six hits, no walks is something you'd take from him every time.  Rogers remains outstanding.  Arraez had another good game.  And Rosario, well, what more can you say?

Record:  The Twins are 59-36, in first place in the American League Central, four games ahead of Cleveland.