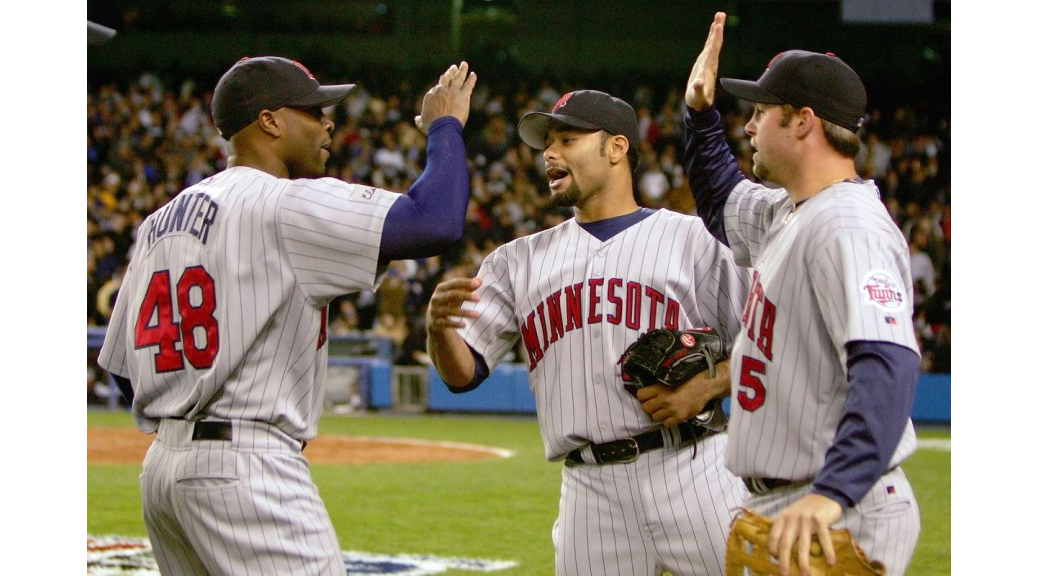 Opposition stars:  Derek Jeter was 2-for-3 with a walk.  Aaron Boone was 2-for-4 with a double.  Bernie Williams was 2-for-4.  Alfonso Soriano was 2-for-5 with a double and a stolen base.  Mike Mussina pitched seven innings, giving up three runs on seven hits and three walks and striking out six.

The game:  Stewart opened the game with a ground-rule double, but was stranded at third base.  The Twins got on the board in the third, however.  One-out singles by Cristian Guzman and Stewart put men on first and third, and Luis Rivas hit a sacrifice fly, putting the Twins up 1-0.

The Yankees got a pair of two-out walks in the third but stranded them.  The Twins loaded the bases with two out in the fourth but also stranded them.  New York got a two-out double in the fifth but again could score.

The Twins added to their lead in the sixth.  Matthew LeCroy led off with a single.  With one out, Torii Hunter circled the bases on a triple-plus-error, giving the Twins a 3-0 lead.  The Yankees had men on first and second with none out in the seventh and did not score.  The Twins had men on first and second with one out in the eighth but were also turned aside.  It was still 3-0 going to the ninth.

New York did not go away quietly.  Williams led off with a single.  With one out, Boone doubled, putting men on second and third and bringing the tying run up to bat.  Ruben Sierra flied out, but Soirano singled, making it 3-1, putting the tying run on base, and bringing the deciding run up to bat.  But Nick Johnson grounded to third and game one belonged to the Twins.

Notes:  No spring training lineup here.  All the regulars played the whole game.  It was Stewart in left, Jacque Jones in right, and LeCroy at DH.

Santana had a hamstring injury which limited him to four innings.  The bullpen stepped up and came through.  Rick Reed was the first man out of the pen, and while the Twins might have hoped he would fill up some innings he pitched to just three batters, retiring the first two before giving up a double to Soriano.  First Romero and then Hawkins picked up the slack.  Closer Eddie Guardado had the worst game of any of the pitchers, but managed to get the job done.

Ah, those wonderful, innocent days of youth, when we actually thought the Twins had a chance to beat the Yankees in a playoff series.

Record:  The Twins were 1-0 in the best-of-five playoff series.