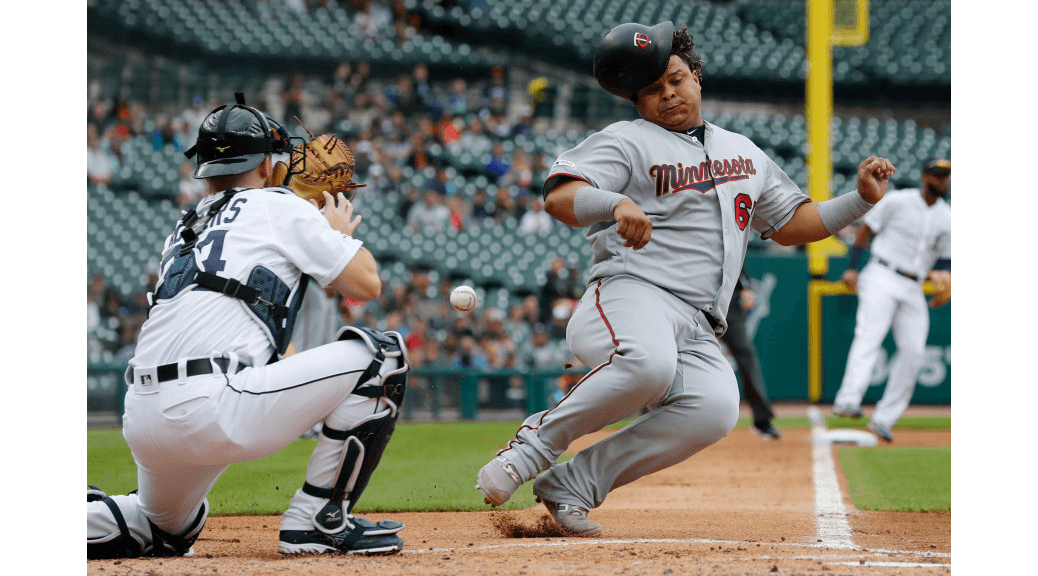 Opposition stars:  Brandon Dixon was 2-for-3 with a double and a walk.  Jordy Mercer was 2-for-4 with a home run, his seventh.  Victor Reyes was 2-for-4.

The game:  Neither team did much in the first inning, but that changed quickly in the second.  With one out, Miguel Sano walked, Arraez doubled, and Jake Cave delivered a two-run single.  Willians Astudillo was then hit by a pitch and Jason Castro had an RBI single to make it 3-0.  With two out, RBI singles by Polanco and Cruz built the lead to 5-0.

The Tigers got one back in the bottom of the second on doubles by Dawel Lugo and Dixon.  Neither team did much in the third and fourth, but each team scored one in the fifth.  The Twins got their run when Arraez singled, went to second on a ground out, and scored on an Astudillo single.  In the bottom of the fifth Dixon walked, went to third on a pair of wild pitches, and scored on a Reyes single, leaving the score 6-2.  Mercer homered in the seventh to cut the margin to 6-3.

The Twins put it out of reach in the eighth.  Astudillo was again hit by a pitch.  There was still a man on first with two out, but singles by Polanco, Cruz, and Rosario brought home two runs and put the Twins up 8-3.  The Detroit threatened in the ninth, getting one-out singles by Dixon and Mercer, but a double play ended the game.

Notes:  Max Kepler was in center field in the absence of Byron Buxton.  Buxton did come in to play defense in the ninth.  Jake Cave was in right field, but moved to center when Kepler came out of the game in the seventh.  LaMonte Wade took over in right field, and Cave came out of the game when Buxton came in.  Astudillo started at first base, but was replaced by C. J. Cron in the eighth.

Graterol made his major league debut and has an ERA of 0.00.  Time will tell, but who knows?  Maybe this game will be remembered as the game in which Graterol began his major league career.  He struck out one batter, gave up one solid hit and one infield hit, and got a man to hit into a double play.  He also threw one to the backstop in an obvious effort to show the Twins brass he belongs on this pitching staff.  I hope next year he'll be given a chance to start, but I'm fine with him being in the bullpen for the rest of this season.

The Twins scored eight runs without a bomba.  Maybe they said and I missed it, but I wouldn't be surprised if that's the most runs they've scored this season without hitting a home run in the game.  I have nothing against home runs, but it is nice to be able to put up a big number without them, too.  It seems to me that the more ways you have that you can score runs, the more likely you are to score runs.  A team that can score by playing big ball and by playing small ball should score more runs than a team that can only do one of those things, no matter how good they are at the one thing they can do.

I know wins and losses are not a good way to judge a starting pitcher.  It does, however, say something about your ball club when you have a pitcher in your rotation whose record is 3-14.

Record:  The Twins are 84-52, in first place in the American League Central, 5.5 games ahead of Cleveland.