Harry Dalton was the general manager of the Baltimore Orioles, the California Angels, and the Milwaukee Brewers.

END_OF_DOCUMENT_TOKEN_TO_BE_REPLACED 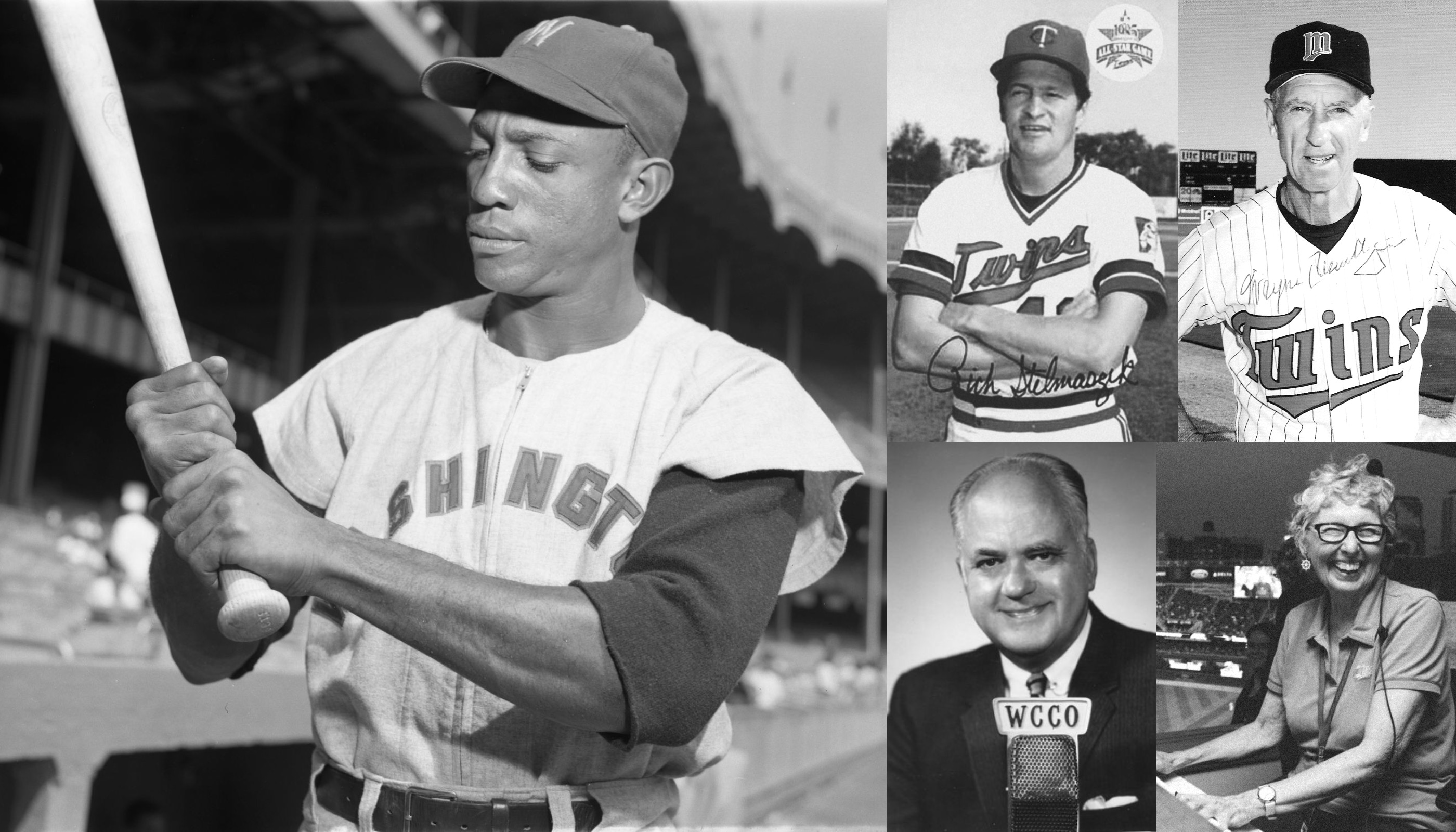 This weekend the Twins will induct Michael Cuddyer (2001–2011) & Andy MacPhail (1984–1994) as the newest members of the club's Hall of Fame. This honor was first bestowed on five players—Harmon Killebrew, Rod Carew, Tony Oliva, Kent Hrbek, & Kirby Puckett—and a former club owner in 2000.

MacPhail was the primary architect of the Twins' two World Championship teams, which had the potential to develop into a mini-dynasty had his boss Carl Pohlad given him slightly more latitude with payroll, particularly following the second trophy in 1991. MacPhail left the Twins in 1994 to take over the capsizing Cubs, and soon after Pohlad began issuing a string of threats to sell the team to an ownership group in a mediocre mid-Atlantic market (still without a team decades later), where it doubtless would have quickly withered in a minor-league ballpark under the heat from the Atlanta Braves dynasty to its south. True to form, a couple years later Pohlad conspired with his pal Bud Selig—so distraught over the loss of his beloved Milwaukee Braves that he hijaked the Seattle Pilots—to take a payout from MLB and contract the Twins. I doubt that is mentioned in his Twins Hall of Fame bio.

Apart from MacPhail and Pohlad, four other executives have been inducted, a somewhat restrained number given the franchise's Brezhnevesque fetishization of internal stability in its front office, to the point of systemic intellectual stagnation. These are:

Calvin Griffith, the owner who relocated the franchise to Minnesota, and whose considerable baseball savvy was only trumped by his racist grudges & motives.

George Brophy, general manager of the Minneapolis Millers until the club folded in advance of the Twins' arrival; he was promoted to the majors in Minnesota and eventually presided over the club's entire farm system, developing a prospect-rich pipeline that won it all two years after he retired.

Jim Rantz, who succeeded his mentor, Brophy, and ran the farm system through thick & thin for twenty-seven years.

Cuddyer, the Twins' first round draft pick (9th overall) in 1997, will be the 20th player inducted by the Twins. He joins real some real Hall of Famers, some Very Good-ers who rightfully claim legendary status in Minnesota, and a couple guys with notable careers but dubious credentials. Unfortunately for Cuddyer, this last group describes his own Minnesota curriculum vitae. By position & rWAR with Minnesota, these players are:

The lone elected–but–uninducted player is Chuck Knoblauch, the brassy second baseman of the 1991 World Champions who has ridden his way into ignominy on waves of domestic assault, performance-enhancing drugs, and sewer-worthy social media activity. Twins fans pelted Knobby with hot dogs in 2001. The Twins disinvited him from the Hall of Fame in 2014.

We are fortunate to live at a time when public monuments to reprehensible conduct are being contested and removed. Knoblauch's anathematization suggests the Twins are willing to draw a line; the question becomes, should the club reconsider how it has celebrated:

Calvin Griffith, who was memorialized in bronze outside Gate 29 in 2010. This is the same Calvin Griffith who said of moving his club from the District of Columbia to Minnesota—"I'll tell you why we came to Minnesota. It was when I found out you only had 15,000 blacks here. ... We came here because you've got good, hardworking, white people here."—and drove away the best position player in franchise history with his potent combination of bigotry & parsimony in the same night. If the Twins are an organization with a conscience, Griffith's statue should be razed before the end of the season. I am not the first to point this out. Perhaps I could make the first suggestion for its replacement: Carlos Paula, a Cuban right fielder who broke the Washington Senators' color barrier in 1954 and played for the Minneapolis Millers in 1957.

Carlos Paula presents an opportunity to consider the status of Torii Hunter, the Twin Cities media darling whose brand of casual bigotry seems to be amenable to the Pohlads, Dave St. Peter, and the new Derek Falvey-Thad Levine front office regime that retained him. Hunter once slandered black Latino players like his then-teammate Vladimir Guerrero, pioneers like Carlos Paula, and the most beloved Twin of all time, Tony Oliva, as race "imposters." One wonders what he makes of Miguel Sanó, the Twins' emerging slugger and a Dominican of Haitian & Cocolo heritage. During the press conference celebrating his return to Minnesota, Hunter indulged himself by publicly branding a reporter a "prick" four times for asking him to reflect on his freely-professed anti-gay rhetoric. The Twins had expressly brought Hunter back to mentor its talented, ethnically diverse next generation.

Carl Pohlad was a multi-billionaire who, as a young bank official, foreclosed on mortgagees during the Depression and then, at the end of his life, bilked his community for the beautiful ballpark the Twins call home. His manipulative, naked avarice will likely be forgotten thanks to the Vikings' new monstrosity, and in any case his kids aren't about to remove the statue of their parents from the ballpark's grounds. Hopefully a future owner of the Twins will find a more suitable place for that statue, perhaps overlooking the HERC.

Finally, there's the thorny question of what to do about Kirby Puckett, a phosphorescent talent whose effervescent personality made him a hero of a generation of Twins fans, and who, after his forced retirement, fell hard from atop the improbable mountain he scaled out of Chicago's Robert Taylor Homes. Frank Deford's "The Rise and Fall of Kirby Puckett" read like the kind of hit piece someone as misanthropic as Deford would relish writing, but looking away from the accusations it detailed is not an option, no matter the apparent glee with which they were related. Over a decade after Puckett's early death, many of us remain deflated as the Metrodome he electrified, uncertain how to address a man who did much good in the community and failed to live up to that standard in his private life.

There are four other non-player members of the Twins' hall, disparate talents unified by indelible personalities:

Herb Carneal, always and forever the stentorian Voice of the Minnesota Twins.

The gap between the number of club executives and people who shaped the games on the field and in fans' minds suggests a couple areas where the Twins Hall of Fame neglects the club's history.

Rick Stelmaszek's two visits to Minneapolis this season following his pancreatic cancer diagnosis have been bittersweet. Stelly's firing in October 2012 after 32 years of coaching struck me as particularly cold-blooded. Stelmaszek was not the GM who assembled a bullpen corps that included Brian Duensing, Jeff Gray, Matt Capps, Tyler Robertson, and Anthony Swarzak. Stelmaszek was a notorious conditioning taskmaster for decades; unpreparedness and ambivalence would have been completely out of character. Twins players across generations seem to love the guy. For his critical role on two World Champions and his decades of relationship & player development, Rick Stelmaszek should be in the Twins Hall of Fame while he is still among the living.

Wayne Terwilliger's tenure with the Twins coincided with Andy MacPhail's, but it was neither his first experience in the organization nor his first Minnesota go-around in professional baseball. Twig might be the embodiment of both Minnie & Paul. He played for the St. Paul Saints in 1952 and the Minneapolis Millers from 1954–1957. In between, he played for the Senators from 1953–1954. Jackie Robinson's understudy on the '51 Dodgers, Twig appears to have been out with an injury when Carlos Paula broke the Senators' color barrier at home on 1 September; Twig & Paula saw action as replacements in the first game of a double-header in Detroit on 12 September. They both met again in Minneapolis as starters for the '57 Millers. Twig joined the Twins in 1986 and is one of a handful of on-field personnel on both the '87 & '91 teams. After leaving the Twins (why?), Twig managed the St. Paul Saints from 1995–2002. I don't know much about Twig's personal life other than his WWII tour with the Marines (including Saipan, Tinan, & Iwo Jima), but not many non-owners get to spend over sixty years in professional baseball if they're jerks. Somebody could go ask Willie Mays for a character reference—he & Twig were teammates on the Giants.

I am not ready for Sue Nelson to retire, but I hope that the Twins will see fit to celebrate a woman who has had as much influence on the soundscape of Twins baseball as any player to knock out a home run, or any broadcaster whose voice rises in anticipation, meshing with the fans shouting a hip-hooray as the ball soars out of the field. Sue would be a fantastic addition to the Twins Hall of Fame.

The last of these is Halsey Hall. Halsey's the namesake of the Minnesota SABR chapter, and he was inducted into the Minnesota Sports Hall of Fame nearly thirty years ago, so this should be a relatively easy. If more proof of his merit was necessary, his status as an Twins' original—and easily the all-time most colorful—broadcaster, his longtime affiliation with the Minneapolis Millers, and his post-retirement tour as pre-game emcee at the old Met would be sufficient. And yet, with every year it seems less likely that Halsey will be elected to the Twins Hall of Fame. He retired from broadcasting in 1972 and died in 1977, so the current voters and younger fans likely couldn't care less about a loveable nut calling baseball games on radio signals that are probably passing into interstellar space.

But that's still a shame for the Twins. It's just not a Hall without Halsey.